Corresponding with the Mothership. 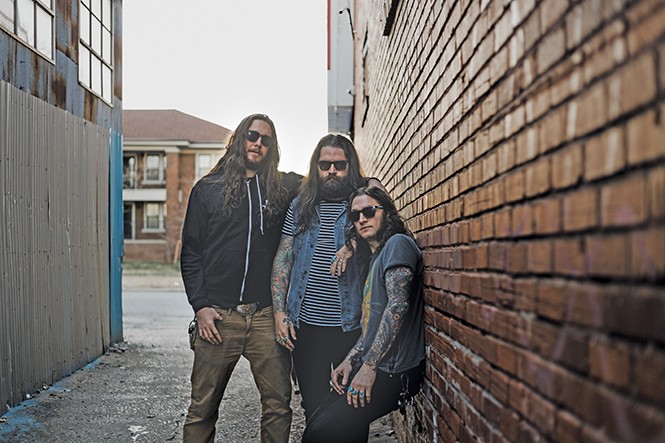 Captain's Log, Stardate 94800.49. I bricked my phone today. Probably because of too many tabs open in Firefox. The T-Mobile dude said it'll take two orbits before I get a new one. Now, hurtling through the Snickers galaxy en route to the Burrito Nebula, I'm forced to hail the Mothership via email, the lowest form of communication. The purpose: a response to their latest transmission, a 34-minute missive titled High Strangeness (Ripple Music).

Juett, his brother Kelley (guitar, vocals) and Judge Smith (drums) are traveling in a vessel meant to blend in among our terrestrial vehicles; "Humans call it a Ford; we call it Badass." In order to remain as low-key as possible, Juett says they've cloaked the vessel in a standard work-van wrap. Rolling on four wheels puzzles Juett. "Why not just fly? Tunes are up, thrusters are hot and the warp speed is on point."

In their bid to blend in, Mothership claims to hail from Dallas, Texas. It's "where the portal opened," Juett explains. "Our people tend not to stray too far from the point of cosmic entry, so we call that our Earthen home base." Mothership's people, it turns out, are sent on reconnaissance missions in much the same way that Mormons receive their marching orders: You indicate a preferred destination and hope for the best. "Texas was what we had always wished for."

As an invocation of sorts, High Strangeness opens with a meditative, mid-tempo, instrumental phase-fest propelled by wah-guitar—also titled, incidentally, "High Strangeness." Excepting another instrumental, the gorgeous, melancholic "Eternal Trip," the rest of the message consists of far-out, monolithic riff-rock songs. It feels like a possible response to the Voyager Golden Record, a platter sent into space by the people of Earth in 1977 on Voyager 1, which is now somewhere in the Kuiper Belt—where there's a lotta rock but no turntables. In the space between the grooves and the label is a message: "To the makers of music—all worlds, all times." A recording by former United States President Jimmy Carter says, "This is a present from a small, distant world, a token of our sounds, our science, our images, our music, our thoughts and our feelings. We are attempting to survive our time so we may live into yours."

Somehow, the Juett brothers and Smith heard Carter's words. I ask if the song "Wise Man," immediately following "Eternal Trip," is a direct reply to Carter. He says it is. "Nobody speaks to the wise man/ They all see the truth/ Many are blinded/ Nobody thinks like a wise man/ You're convinced that you know/ But you'll never be home till you find it/ I know you can help me light the way/ Sick and tired of all their lowdown, crooked ways."

Transmissions from space can take some time to reach their destination, yet the lyrics imply that Mothership knows that President Carter is retired and Donald J. Trump is in charge. I inquire if Juett knows this. His reply is a rhetorical riddle: "Were you aware that Lemmy is God?"

Mothership shares more common ground with the Ancient Kolob-ian LDS race. Juett says their mission is to "bring forth the cosmic gospel." In literature accompanying High Strangeness, the band says they want to unite "true believers." How, then, were we Earthlings chosen for unification? How long did Mothership study us from the heavens? What did they learn about us? What makes us worthy of their culture's riffs and wisdom? "The people on this great planet created rock 'n' roll and were here to keep the sacred flame burning bright," Juett says.

In return for their guidance, Mothership asks two things: that we help spread their message and that we Salt Lakers continue to look to the sky and, upon Mothership's landing, "bring some Apollo Burger."