A neighbor's recollection of her first encounter with Peter Hayes 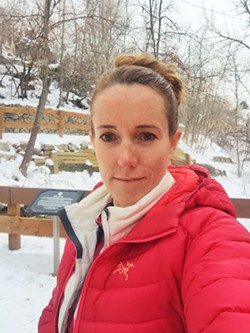 After spending 15 years guiding rafting trips on desert rivers, including a stint on the Grand Canyon, Annie Payne felt a bit out of place in her new home, located in the Yalecrest neighborhood of Salt Lake City.

In this neighborhood, the streets are named after Ivy League schools and the homes, built in a distinctively European period revival style, are upscale.

A few months after moving in, Payne had her first child, a boy. The year was 2005, and a neighbor of hers, Peter Hayes, who lived just up the block and across the street, was also new to the neighborhood.

A full moon glowed in the night sky the night Payne’s son was born, and the month was May, when river runners across the continent strike out in search of the biggest and best water. Though her son was born healthy, Payne says river-specific omens came to mind as she contemplated the magnitude of the birth: High water, full moon.

“When people have babies, they talk about height and weight…” Payne says. “For me it was like, ‘Oh, he was born at high water, full moon, he’s going to be fine. Those are the two best indicators I could have.”

A friend of Payne’s decorated the outside of the house with balloons and a banner that read, “It’s a Boy.”

"He was born at high water, full moon, he’s going to be fine. Those are the two best indicators I could have."

The decorations prompted Hayes to drop in and meet his new neighbor, and what he said made Payne feel at ease with the new path her life was taking. “The first thing he said was, ‘Oh, he was born at high water,’” Payne says. “That was the first time I met him and I just knew that I was in the right place.”

That Payne and Hayes ended up in an upscale neighborhood on Salt Lake City’s east side was not by mistake. Hayes’ back porch was mere feet from Red Butte Creek, while Payne’s backyard bordered Miller Park, an open space area owned by Salt Lake City with the creek coursing through the center.

Running water, Payne says, “That’s why both of us bought properties along Red Butte Creek.”

On June 11, 2010, Chevron Pipeline Company’s crude oil pipeline ruptured, spewing 50 gallons per minute into the creek near Red Butte Garden and Arboretum. As emergency crews responded, the pipeline was shutdown and cleanup efforts began, Hayes emerged as an unofficial spokesman for the neighborhood.

In December, after Chevron’s pipeline sprung another leak at the same location, Hayes was took a shot at the government and the oil company. “These people, they don’t get it,” he told The Salt Lake Tribune. “I’m angry at the government for not speaking up for the people they are supposed to protect. I’m angry at Chevron for ignoring the safety and the welfare for the people they serve.”

In another story published in the Deseret News, Hayes said: “It stinks and it is toxic. Whatever is in that creek will die. I have so little faith in oil companies to take care of this.”

In early 2013, Hayes was diagnosed with idiopathic pulmonary fibrosis, a disease with no known cause that eventually robs its victims of the ability to breathe. Hayes succumbed to the illness on Sept. 15, 2015.

Payne is one of multiple neighbors who remain concerned about the health impacts of the spill. Although the Salt Lake County and state departments of health have conducted a cancer incidence study that shows no spikes in cancers related to crude oil exposure, Payne continues to worry about the long term health of her children.

Payne is one of many who believe that exposure to crude oil could have contributed to Hayes’ death. And, importantly, his friends and colleagues say that Hayes, who was 60, believed that his disease was sparked by the oil that flooded the creek he loved.

Rob Wilson took over teaching the ninth grade biology classes at Rowland Hall that Hayes had taught for 18 years, and he says that Hayes’ love of water was evident in the way he taught and the way he lived.

“If you look at the whole picture and interpret the facts of his live, he loved running water,” Wilson says. “That was his first passion, his first career, was as a river guide.”