The romantic tear-jerker I Still Believe delivers its faith-based message without being a jerk about it. 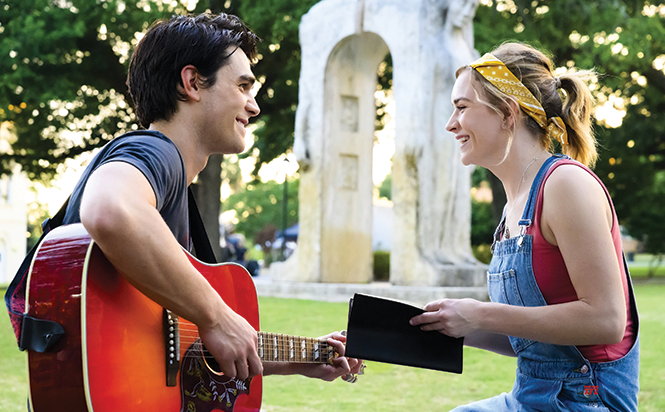 The new faith-based drama I Still Believe really makes the case that you can believe in a higher power—and not be a dick about it.

The believer front-and-center of this story is real-life Christian singer/songwriter Jeremy Camp (New Zealand actor KJ Apa), whose biggest hit is the movie's title. This film takes us back to before we hit the millennium, when a young Camp falls in love with Melissa Lynn-Henning (Britt Robertson) at his Bible college. Although the quirky, inspirational-music-loving Melissa already has eyes for Jean-Luc (Nathan Parsons), the sensitive frontman for Christian rock band The Kry, our boy Camp eventually wins her over with his tunes that have him both praising the Lord and sweet-talking a special someone into his life.

This movie is the latest offering by Andrew and Jon Ervin, Christian film directors who have built a nice little industry making fact-based films about people who continuously keep the faith under dire circumstances. (This excludes the 2014 faith-based farce Moms' Night Out, a proto-Bad Moms starring TV stars/card-carrying Christians Patricia Heaton and Sarah Drew). With Believe, it appears the bros are out to have their God-worshipping cake and eat it, too, crafting a story that'll hopefully bring in church-goers and people just looking for an effective, romantic tear-jerker.

God looms heavily over Believe, as Jeremy and Melissa bond over music that properly serves our Lord and Savior. But, as a date to a planetarium lays out, their beliefs don't overshadow their understanding that the universe is a vast, wondrous and ultimately mysterious place. Needless to say, this all foreshadows Jeremy learning that Melissa is dying from ovarian cancer—which leads to him to take the plunge and ask for her hand in marriage.

Yes, it's Love Story—but with God stuff. The Erwin boys are practically shameless in presenting this tale of figurative and literal star-crossed lovers who must keep their love alive before one of them has to meet their maker. (You know there's going to be a scene where Camp tells an arena full of people to lay hands on his beloved and pray for her to get better.) It's like this movie was tailor-made for the Hallmark Channel, but its message was much too powerful to be relegated to the small screen.

Apa and Robertson do make a couple whose creamy, sparkling good looks are much better suited for a wide screen. Through their performances, it almost seems like they're constantly letting people know they are available to star in future Nicholas Sparks' adaptations. (Robertson has already been down this road, starring in the movie version of Sparks' novel The Longest Ride in 2015.)

As confidently mawkish the Erwins are at dropping this woeful-yet-optimistic doomed romance, you gotta commend them for doing a film where they make the case that you can believe in God and not be an asshole. The movie is set in a universe where people don't exactly hammer the message that if you don't have some sort of Christian morals, you will spend all your days and nights in the afterlife being Satan's bitch. (The movie doesn't necessarily address the issue of different beliefs and religions. In an unspoken way, everybody just lets sleeping dogs lie.)

For the most part, Believe presents a world where Christians are decent and level-headed, with Camp, of course, being the most model Christian of them all. He comes from good stock: His parents (Gary Sinise and country-pop goddess Shania Twain) are supportive, blue-collar folk. He even has a special-needs little brother he's always there for. While some would make the case that most of the characters are too freakin' perfect—even Jean-Luc doesn't trip that much when he learns that Jeremy and Melissa are smitten with each other—it's still better than the rabid, right-wing fundamentalists who speak for God and that we end up dealing with in the real world. I'd rather listen to Camp and his guitar-strumming gospel than anything Pat Robertson has to say any day of the week.

In its own maudlin, yet comforting, way, I Still Believe reminds us that Christians are people, too. And a lot of them aren't tools!