Rocketman is not the film you think it is at all. Oh no, no, no. 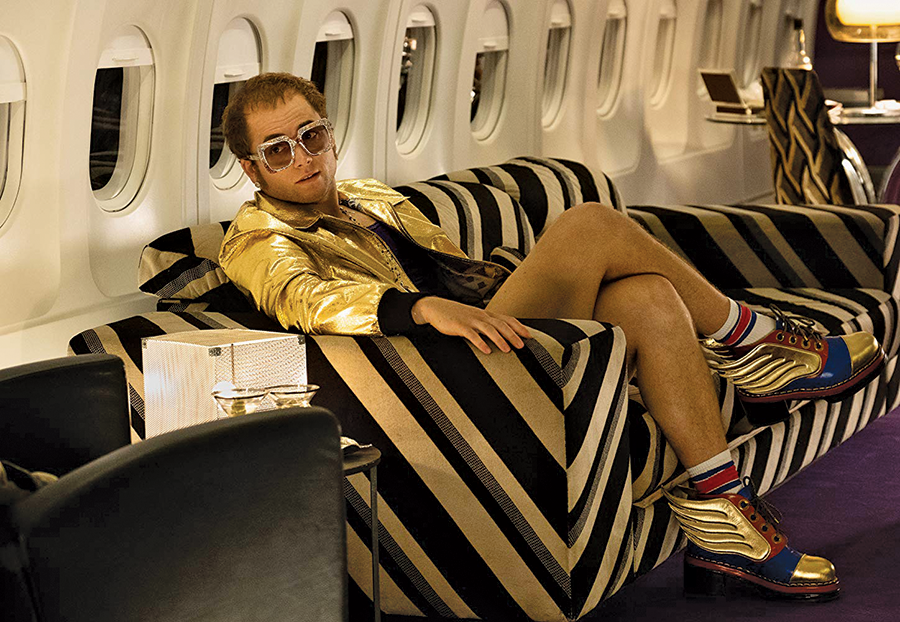 Having seen your share of formulaic biopics, you brace yourself when the first scene of Rocketman has Elton John (Taron Egerton) in full concert regalia—orange bird-man costume with devil horns—striding down a corridor in slow-motion while the music swells. "He's on his way to take the stage," you think with an internal sigh, "only he's going to pause and have flashbacks about his whole life first." Then he bursts through the door and enters ... a support group. He's in rehab.

Rocketman doesn't subvert all the tropes, but it shows enough creativity to distinguish itself from its shopworn brethren. One of those, last year's Freddie Mercury biopic Bohemian Rhapsody, was half-directed (after Bryan Singer was fired) by Dexter Fletcher, who has now directed all of Rocketman with the fervor of one liberated. Watching the film's energetic, imaginative musical numbers and impressionistic approach to history, it's amusing to think how hamstrung Fletcher must have felt by Bohemian Rhapsody's earthbound literalism (not to mention its, uh, other problems).

Unlike that film, Rocketman is a full-on musical. People burst into song, and the songs they burst into are Elton John songs. The screenplay (by Billy Elliot writer Lee Hall) uses rehab as John's excuse to reminisce about his past. Asked about his childhood, he starts singing "The Bitch Is Back"—"I was justified when I was five / Raising Cain, I spit in your eye"—and we transition to a scene in the muted pastels of '50s suburbia where 6-year-old Reggie Dwight (Matthew Illesley) leads townsfolk in a rousing song-and-dance number through the streets.

Do the lyrics to "The Bitch Is Back" accurately describe Reggie Dwight's childhood? Not really. (How could they? He didn't write them.) But the song conveys the feeling that the film needs in that moment, and that's enough. Other songs are used in situations more apropos to their lyrics, including a sweet scene where John composes "Your Song" and sings the words, penned by his lyricist Bernie Taupin (Jamie Bell), to Taupin, the heterosexual man with whom John is hopelessly in love; their friendship is the film's tender, wholesome center. That's not how that tune actually came to be composed, but "The Bitch Is Back" already established that that's not the point. John, his band and the audience didn't all briefly float in the air when he played "Crocodile Rock" at the Troubadour in 1970, either, but it's a hell of an exhilarating image.

Young Reggie (played as a tween by Kit Connor) has a free-spirited mother (Bryce Dallas Howard) but a withholding father (Steven Mackintosh) who responds to a request for a hug with "Don't be soft." The boy's lifelong struggle to love himself and feel worthy of love stems from this, and influences all of his adult relationships: his romance with manager John Reid (Richard Madden) that turns sour; his brief, futile marriage; a promiscuous phase depicted symbolically in a musical number. The film is more open about John's sexuality in the '70s than John himself was, but it's still pretty chaste in terms of what it actually shows, painting him as one who was keen on drugs and rock 'n' roll, but only occasionally interested in sex.

Egerton, who starred in Fletcher's Eddie the Eagle as another real-life person who was famously much less handsome than himself, shows range and vulnerability as the conflicted performer while also meeting the demands of the music. The major points of John's career are addressed, but they aren't the focus. There are never any captions telling us what year it is, or what people's names are. Centered more on John's personal arc and its relatable themes, this could almost be the story of a fictional rock star, culminating in a powerful, theatrical climax where he faces the demons of his past.

Unfortunately, the spell is broken by the onscreen titles at the end that tell us how many albums Elton John has sold, how much money he's raised for AIDS research and how he did eventually find true love. The movie—for which John is an executive producer—never feels like a vanity project until that moment. Still, one misstep (curse you, tropes!) can't undo the electrifying goodwill built up over the previous two hours. The way Fletcher incorporates music and emotion into the story should be instructive to anyone making a rock biopic hereafter.