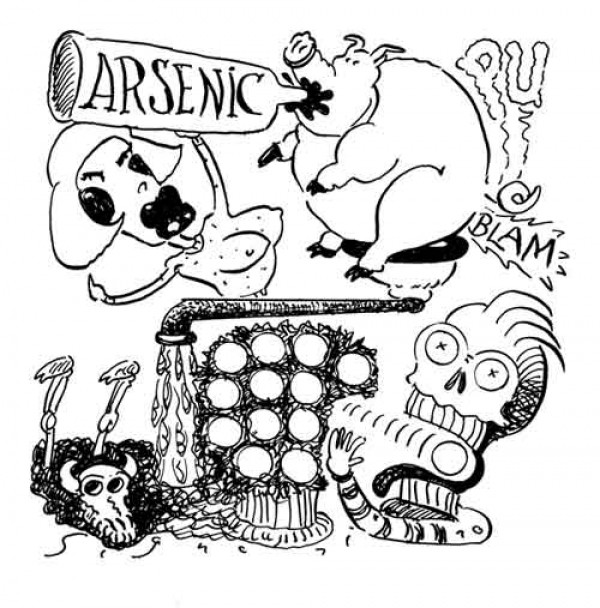 I read once about a pork processing operation that supposedly was the largest in the United States. The stockyard, according to the article, had a giant lake of pig excrement contaminated with hormones, heavy metals and other substances so toxic that people who fell in died within minutes. That sounded wrong—surely it would take at least a few hours to die from that kind of exposure. Can you shed any light? —Mike

You’re right to be skeptical, Mike. Industrial pig farming is gross, and industrial pig farm waste, which is measured in the millions of gallons, is really gross. However, it won’t kill you in minutes. Having investigated, I think we can safely conclude that somebody got their stories mixed up. I will say this: not all the gruesome things that happen on a pig farm happen to the pigs.

We’ll straighten that out later. First, however, we need to get a fix on pig crap.

Let’s acknowledge at the outset that animal husbandry is an inherently yucky business. Remember Upton Sinclair’s 1906 expose The Jungle, about the Chicago meatpacking industry? Maybe you don’t, but take my word for it: Conditions were vile, and they haven’t gotten much prettier since. The main change with respect to pigs is that the loci of disgustingness are now diffused throughout the countryside—good if you’re a city dweller, bad if you live next door to a pig farm. Among the trials you may have to endure:

• Fecal floods. A modern hog-raising operation may house tens of thousands of animals, all producing waste nonstop, which flows into a vast holding pond and mainly just stays there—when all goes according to plan. When it doesn’t, such as happened in June 1995 at Oceanview Hog Farm in North Carolina, the holding pond gives way and 25 million gallons of liquid waste inundates the vicinity, submerging planted fields and killing 3,000 fish in a nearby river. On the plus side, the soybean crop, which thrives on this kind of fertilizer, is likely to come out looking pretty good.

• Exploding foaming pig poop. You think I’m making this up? Sadly, no. Pig manure, like most forms of solid animal excreta, gives off methane as it decays—not a good thing for the environment, but historically not an immediate threat. That changed four or five years ago, when factory-farm workers started finding a layer of foam up to 4 feet thick forming on top of some pig waste pits. Methane and other gases get trapped beneath, and when ignited by a stray spark, they can explode with deadly effect. Since 2009, more than such 30 incidents have been reported, with barns destroyed, workers injured, and pigs killed as result of FPP detonations. One blast in Iowa turned 1,500 hogs into premature bacon. So far, the cause is unknown; speculation centers on changing pig diets or else the evolution of new microorganisms in the waste pits. The practice of feeding hogs leftover grain from ethanol production may have something to do with it: the foam primarily afflicts farms in the ethanol belt—Minnesota, Illinois, and Iowa—and not so much in hog-rich North Carolina and Virginia. Others, though, say this theory is a pile of crap.

• Intense eau de pig. The noise and in particular the smell of hog farms can affect your health. My assistant Una, who’s been downwind of a big feedlot on a warm day, describes it as being “like a pile of burning diapers.” The gases from the urine and feces of hog farms contain ammonia, hydrogen sulfide, carbon dioxide and carbon monoxide, methane, and other chemicals so corrosive the miasma from the barns dissolves metal. A survey of residents near North Carolina hog farms found many suffered from burning eyes, scratchy throat, respiratory problems, nausea, vomiting and similar complaints. The University of Iowa found more than half of pig farmers suffer from job-related illnesses. Noise inside hog barns can exceed 110 decibels, enough to cause permanent hearing loss.

• Toxic waste. Thus do we arrive at your question, Mike. No question, heavy metals and other poisons readily find their way into what goes into hogs and thus what comes out. An extreme example is China, where arsenic is commonly added to pig feed to make the meat redder—a big feedlot there can add a ton of arsenic to the soil in five years. Similar problems, albeit on a lesser scale, can be found in Western countries.

Extensive searching of news databases turned up no case of anyone dying purely as a result of tumbling into pig excrement. Just the same, you don’t want to lose your footing at a pig farm. In September 2012 a 69-year-old Oregon hog farmer named Terry Garner, known for the exceptional size of his animals (some weighed more than 700 pounds), went missing after going out to feed them. All that could be found several hours later was his dentures and some body parts. Although too little remained to permit a precise determination, apparently he’d fallen and been eaten by his pigs.