Hold Your Breath: Liars and No Age keep Salt Lake City on edge 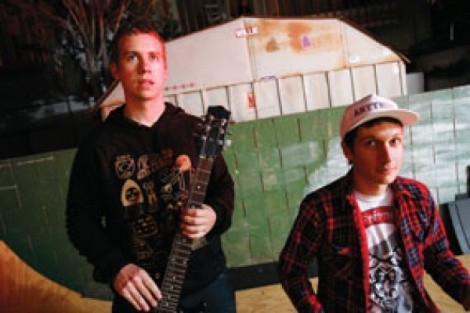 Just remember that, no matter what else happens, there will always be Belgium.

As the story is told, the power-pop/art-punk aesthetics of the Liars and the Los Angeles duo now behind No Age shared a stage there once. It wasn’t necessarily a planned outing—both bands happened to be in the same place at the same time sort of thing—but it was far more than enough for Liars’ frontman Angus Andrews.

“Dean and Randy were in this band Wives that just didn’t work out,” Andrews says. “Later, I saw the two of them come through Berlin as No Age, playing this small place near where I live. It was the first time I had seen them play and they just blew me away completely. I’m really excited that we’re now getting the chance to tour.”

That is, if the tour actually reaches fruition. That particular road is proving to be a difficult one to travel down. It seems that Liars first wanted to do this tour shortly after that night in Berlin. Then Interpol called and everything got put on hold as they set about opening for those fastidiously dapper New Yorkers. Now, once again, on the brink of setting off together, the deliriously energetic Andrews happened to put his gawddamn back out. So this tour, the one that could possibly end up exposing the brilliant sonic affectations of No Age to a whole new audience, is now wholly in question.

According to Randy Randall, No Age guitarist to Dean Spunt’s singing drummer, Andrews is “doing all right. I think he’s just resting, trying to take it easy. As far as I know, he’s doing a lot better.” When you ask the broke-back man himself, things come across more up in the air: “I’m pretty ragged and rough, actually. My back is completely thrown out; it’s going to be interesting. I just don’t want to be the one who pulls the plug on everyone else’s fun, you know? It just means that it’s going to be a very different type of live show for us.”

What he means by that, for those of you uninitiated into the often weird world of live Liars, it that there probably won’t be any writhing and wriggling about as he attempts to croon the tunes. Furthermore, there probably won’t even be the all-white suit because as the down-and-nearly-out Aussie cringingly admits, struggling into one of those in his current condition seems like a pure living hell. When all is said and done, Andrews claims he’s up for the challenge, “Just no cartwheels.”

So apparently the tour is on, a bum spine notwithstanding. For Randall, he’s just happy finally to be getting on the road again. It is hard to find any fault with that fervor considering the recent critical whirlwind that has picked up and lovingly spat out No Age.

“We started out releasing five different vinyl-only records, on five different labels,” Randall explains. “Two here in L.A., one in New York, one in England and one in Sweden. The surprising thing for us is that I don’t think you can even find any now. We thought the original amount would be more than enough. Then the opportunity came to put some of those songs together as a CD.”

Having the opportunity to release all those EPs—practically simultaneously—with a heavy artistic bent to the packaging and all was payoff enough. But then along comes Fat Cat Records and before they could even comprehend what was happening, there was the immediate chance to compile the disparate tracks. The twosome couldn’t be more pleased with how it all unfolded, not to mention the results, Weirdo Rippers. Even Pitchfork decided to call it their 12th favorite album of the year.

“It came kind of soon for us because we didn’t really expect anyone to notice what we were doing,” Randall says. “It’s crazy to get that kind of response for something we didn’t even expect to do.”

Apparently, Andrews isn’t the only one paying attention. Now that the duo has the new album Nouns scheduled for a SubPop release in May (post this Liars thing), the plan is tour again early summer with friends Abe Vigoda. There are also plans to meet up with others like Ponytail from Baltimore and fellow Angels Mika Miko.

So, even if said feeble back ends up sabotaging it all, No Age has already cultivated plans to guarantee delivery of their particular brand of goods. And according to the debilitated Andrews, it’s lucky because these two are bloody incredible live.

“I think it’s the immediacy of being onstage, they use that to their full advantage,” Andrews says. “For me, playing live is like looking down the barrel of a gun. It’s for real; a trial by fire. I think it’s great, otherwise, I wouldn’t do it. But the period leading up to it is always agonizing.”

With the sad fact being poor Angus Andrews is practically in traction just before meeting up with No Age for the start of their tour, this time around certainly will prove to be more agonizing than he could have ever imagined. But if nothing else, they’ll always have Belgium. And us? We’ll always have No Age this summer.