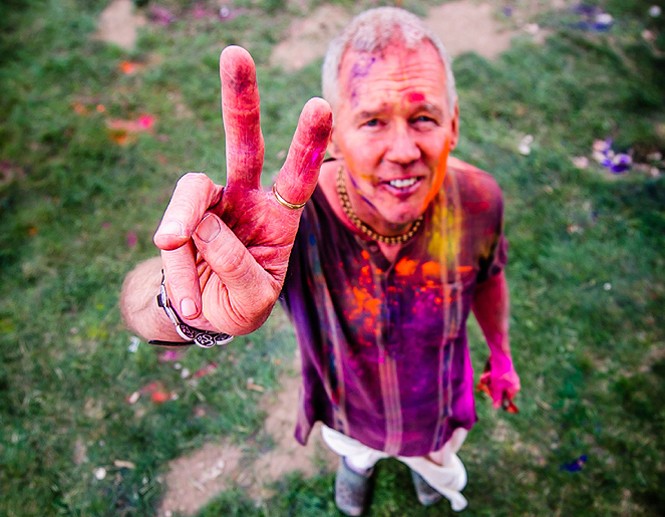 Any day now, look for local Facebook profile pictures to become faces splashed with colorful dust. Held the final weekend of March, the Holi Festival of Colors has grown to attract thousands, so that organizers now have to charge for parking. Colors are thrown every hour at the Sri Sri Radha Krishna Temple (8628 S. State Road, Spanish Fork, FestivalOfColorsUSA.com), where the event is not only considered to be among the largest, it also sparked the trend of color runs and color festivals across the nation. Temple President Caru Das Adikari discussed the colorful history of the Holi Festival with City Weekly.

What's so special about Spanish Fork Holi Festival of Colors?


Three things: We got people together en masse, we introduced the countdown and throw, and we've brought contemporary music to the ancient mantras. In ancient times in India, people used to grind up flower petals and throw them on each other. We can't afford to do that, so we use a substance called gulal. It's corn starch, usually lightly scented with musk, sandalwood or jasmine. In India, they do it wet, but we don't want anyone to catch cold. Plus, when you add water, it makes it all brown and you lose the colorful effect, so we keep everything dry.

How did the event become such a viral phenomenon?


We have someone on stage, who, in unison with the crowd, will count down from 10, and they'll throw their colors straight up in the air. It has the effect of a fireworks show in broad daylight. It's a photographer and videographer's dream come true. When these images of 7,000 or 8,000 people throwing color into the air started to appear on Flickr and Pinterest and videos on YouTube, people started to put it up all over the world, so now there are color events everywhere. There was an article in The Wall Street Journal about a year ago that talked about the worldwide phenomenon of color runs and color events and said it all started in Spanish Fork, Utah.

Do you worry the spiritual significance of the event is getting lost?


It's really not about the meaning, because as soon as you approach a mantra with the idea of meaning, then you have intellectualized it. It's a spiritual experience, and the best way to get the benefit from it is to just listen to it and just give yourself over to the mood and the melody and let the Lord within the heart work his own magic inside of you. We would like people to know why we do it—of course that's beneficial—but ultimately, to intellectualize it is to not get as full of the benefit from it as you could.


We still think of ourselves as the cutting edge because, for us, it's as much about the transformative effects of the event. Colors will help you have a good time, and they have the effect of bringing people together—lots of hugs, lots of love—when you look as silly as you do, being covered in colors. It breaks down the barriers that keep us remote from each other.

It's really the music, the yoga, the Mediterranean cuisine, the messages we get from stage, which may take it from the level of being a potentially transformative event.

What's the role of music in your festival?


From all the Kirtan artists that are out there, we pick the ones that have the most lively, upbeat, danceable music. You have the mantras with dubstep, hip-hop, techno, electronic, ska, reggae music, so it's a really unbeatable combination of East and West, old and new. One band is called the Householders. They live in the Himalayan Institute in New York City and practice yoga. They also have a background in electronic and ska, reggae, Kirtan, hip-hop and rap.

Another band is called The Dub Kirtan All Stars. They also, in an amazing way, combine electronic, EDM, with mantras. Wah used to be the back-up singer for Krishna Das, the No. 1 Kirtan singer in the world. She went out on her own a couple years ago, and now she's a star in her own right. She's got about 12 albums to her credit. MC Yogi will be back with DJ Soul, and the last three years, MC Yogi's albums, for each of the last three years, have been No. 1 on Billboard, and he's a rap artist too.

In India, the festival takes place at the beginning of March. Why is it held later in Utah?


Practical reasons. One is that the chance of cold weather, at least traditionally in Utah, is greater the earlier in the year. It's also a fact that [The Church of Jesus Christ of Latter-day Saints] general conference weekend is the first weekend in April, so that's out. And then the second week of April, BYU exams start. So really, it's always the last weekend of March.

What's the spiritual meaning that people should get from the festival?


We encourage people to not so much think of the people on stage as the performers and themselves as the audience; we want all the people present to chant the simple Sanskrit mantras along with the bands in a call & response fashion—and, if they do that, they'll experience something extraordinary.

It's believed that any bona fide name of the Supreme is non-different. You know, how they say "wherever two or three are gathered together in my name"? It's considered their special favor, special mercies, special blessings, whenever a group of people get together and give thanks to their creator. If it's 10,000 people, then you've got something extraordinary there. We want the people that come to join in and share in the favor, the joy, the blessings, the opportunities, the open doors that are available for those who in unison give thanks to the creator.