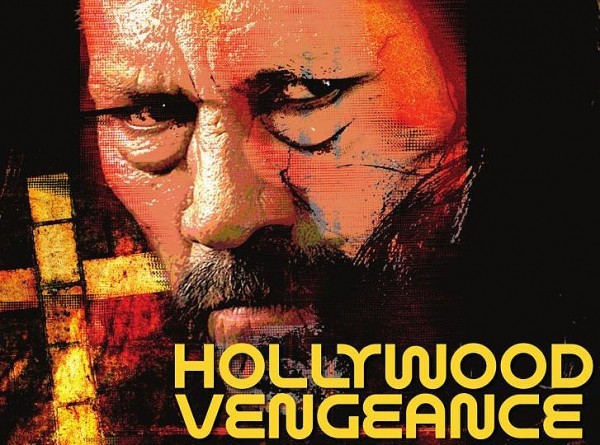 It’s November 2013, and the unreleased local film Vengeance has just been shown to a City Weekly reporter at a special 9 a.m. screening. It was the first-ever screening for media, according to the film’s director, Gil Medina, with Medina himself sitting in the dark theater at Universal Post, located in an industrial area near Interstate 15.

The film begins with helicopter shots above Salt Lake City with actors’ names—Danny Trejo, Tech N9ne, 50 Cent—displayed in block letters against city landmarks like the Utah Capitol and Temple Square.

After the screening, Medina drives his Mercedes downtown to Market Street Grill. He arranged the screening after an OK from his lawyers and is now sitting down for a breakfast interview. “I’m here to clear the air,” Medina says.

About a week before the screening, after months of unreturned phone calls requesting an interview, is when Gil Medina first spoke with a City Weekly reporter. In that initial conversation, he mentions a libel lawsuit. Coming from him, it’s a threat to take seriously.

You see, in the seven years Medina has spent writing, shooting, re-writing, re-shooting, advertising, advertising and advertising Vengeance, his lawyers have been busy. The music promoter turned litigious filmmaker says he holds licensing rights to well-loved tough-guy actor Danny Trejo—star of his unreleased film—and has been attempting to exercise those rights, sending warning letters to production companies that have used the actor without his permission.

But that’s popcorn. He is also suing director Robert Rodriguez—the director of Desperado, From Dusk Till Dawn and Sin City—in Utah federal court for $11 million. And what’s weirder than a little-known Utah director suing one of the most recognizable names in American cinema is the reason: Medina says Rodriguez sabotaged the promotional game app he created with Apple co-founder Steve Wozniak.

Medina spent years struggling to release the film, a veritable love letter to Utah, which he also produced, wrote and directed. To Medina, his lawsuit against Rodriguez tells a story of an influential director squashing the little guy (Medina is the little guy). But while he sees himself as the victim of big Hollywood forces, he has started off in the business in the most Hollywood way possible—through litigation.

And then there is Peter McCardle, a writer in New York City, friend of people “in the industry,” as big a fan as any of Danny Trejo’s (even hoping to write the definitive Trejo biography), and creator of a website that blasts Medina and highlights his past run-ins with the law—a charge of sex with a minor and a conviction of witness tampering.

Medina doesn’t like seeing his name smeared online. And he explains that there are, of course, legal channels to deal with lies found on the Internet.

“That’s how we are going to settle this with Peter, through the law,” Medina says. “But I don’t think he has much.”

He makes clear that whoever prints those lies of McCardle’s is open to a suit as well.

Vigilante Justice
Vengeance
has a long and unsuccessful history. “Listen, this is my Mexican Avatar,” Medina says. “It took James Cameron 10 years for Avatar. That was a masterpiece, and I’m nothing like James Cameron. Someday I aspire to be, but the point is, it takes time. I started with no experience. I learned how to make movies through this movie.”

In 2006, Vengeance was called Jack’s Law and screened for audiences in Kansas, with an appearance by Trejo in Dodge City, while Medina scouted locations and accepted auditions for Jack’s Law 2 (already written, according to what Medina has told the press). Local economic-development boards and film commissions advertised audition opportunities to locals. Over several days, according to the local economic-development board, around 400 people showed up to city hall in the small town of Elkhart, Kan., to audition.

Medina says he had to rewrite and re-shoot about 80 percent of Jack’s Law—which was only a working title, he says—due to strong similarities with another film released around 2010 that he will not name. The audience had already seen that story before, Medina says. 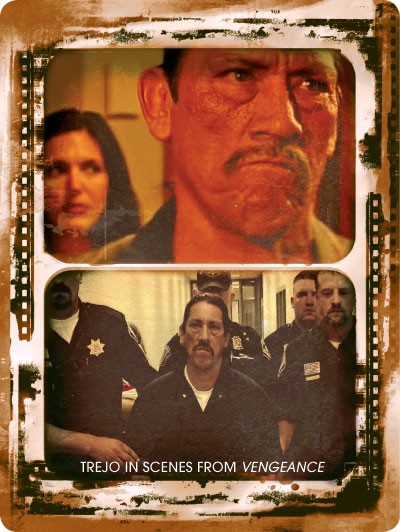 And while Vengeance has the low-budget feel, cameo appearances and revenge-driven plot that fuels classic exploitation movies, Medina says that it’s not in the vein of recent self-aware Rodriguez pictures that bring back those same tropes.

“Rodriguez never influenced me at all,” Medina says. “I like his movies, I appreciate his story. I was influenced by Martin Scorsese, Brian de Palma and Steven Spielberg. Those are my inspirations.”

Unlike Machete and Machete Kills, which are parodies, Vengeance takes itself pretty seriously.

Trejo’s character, Jack, is a police-officer-turned-vigilante after his wife and daughter have their throats slit in an altercation following a minor fender-bender. The murderers are released because the murder weapon was obtained illegally, explained by a defense attorney—played by former Salt Lake City Mayor Rocky Anderson—in front of an actual Utah judge, Leslie Lewis. Jack is then wrongly sent to prison for unrelated charges of selling stolen cars (why not).

In prison, things get worse—at one point, Trejo is seen weeping, shirtless, in his prison cell. Jack befriends a tattoo-artist inmate played by Jason Mewes—that’s Jay from Jay & Silent Bob fame who, according to Medina, agreed to play any part as long as it wasn’t a junkie—but then makes enemies with inmate Spider, played by retired professional wrestler Diamond Dallas, after refusing to make Spider a burrito.

From there, the movie slides into a phantasmagoria of fake blood and Salt Lake City backdrops. Tech N9ne, the rapper, is blown away with a shotgun after attempting to rape a woman mid-robbery at a 7-Eleven in Woods Cross. Trejo and rapper 50 Cent (who, Medina says, agreed to be in the movie in exchange for Trejo acting in Gun, written by and starring 50 Cent) shoot their way out of the Blue Iguana restaurant. Diamond Dallas beats Jack’s grandmother to death with a baseball bat. All this is separated by occasional cuts to black and quotes from the Bible.

No one has before seen this depth of acting from Trejo, Medina says.

Trejo Trolling
Medina met Trejo in 2005 at a since-closed downtown Salt Lake City club during a crew party for The Crow: Wicked Prayer, a basically direct-to-DVD sequel to The Crow.

Medina, who co-owned the bar at the time, noticed Trejo standing by the wall and offered his services. Did he want a drink? A table?

As it turns out, Trejo is sober. But he and Medina became well acquainted, and Medina ended up showing Trejo around town, telling him which restaurants to go to, even bringing Trejo to church with him during Trejo’s time shooting in Utah.

“Hollywood is all about parties, girls,” Medina says, but what he and Trejo were about was “trying to center yourself in Christ.”

There was something about Trejo, Medina thought. It was the little things—how he interacted with the valet and busboys, how cooks would close a restaurant to serve him. Everyone loved this guy.

And Medina saw the potential. It was like knowing the value of Apple stock before anyone else, he explains.

Somewhere in the middle of all this, Medina says, he paid Trejo thousands of dollars to sign a licensing agreement.

Attempts to reach Trejo through his agent for comment on this story were unsuccessful.

According to Medina’s lawsuit, he “identified Trejo as a dominant lead actor whose name, image, and likeness carried marketable value, and who could support a successful film series.”

“This whole thing started with Charles Bronson’s Death Wish,” Medina says. “Back in 2005, I saw Danny Trejo as this generation’s Charles Bronson, before anybody else did—contrary to what you read.”

The plots of Vengeance and Death Wish both involve a man taking revenge after his family is attacked. Poster art for Vengeance is similar to the posters for the first Death Wish. Medina even contacted Paramount for the name “Death Wish” (legal said no, Medina says).

Medina’s lawsuit says that Trejo’s “viability and popularity as a lead actor” grew in large part because of the films Jack’s Law and the Medina-produced Propensity, a small film shown at an LDS film festival in 2006.

But Trejo, who began acting after being discovered on a movie set teaching an actor how to box, has been playing roles in Rodriguez films since his knife-throwing assassin in 1995’s Desperado.

“I’ve done a lot of projects that are student films or from first-time producers or directors,” Trejo said in a 2012 interview with The Guardian. “I’d always rather be working … it’s an honor to be an important part of someone’s career when they’re starting out. I’m like, ‘Just pay for my gas, give me $100, buy me lunch, whatever.’ I bring my A game whether I’m doing this or a Michael Mann movie.”

And it’s those small projects, along with big blockbusters, that will pay out if Medina’s contract holds. The amended lawsuit filed against Rodriguez asks for royalties from movies Trejo shot such as Spy Kids: All the Time in the World 4-D, which grossed $78 million, and Planet Terror, Rodriguez’s contribution to the double-feature Grindhouse, which grossed more than $25 million.

“If you use a Beatles song without the Beatles’ permission, you’re in trouble. … We have sent letters to everyone in violation of this deal,” Medina says.

He’s sent dozens of letters to production companies, from the small independent film Zombie Hunter, shot in Utah in 2013, to Disney.