Movie Magic
Back at Market Street, a young waitress comes to the table to pour some coffee.

“How you been, anyway? How’s school?” Medina asks.

“I’m not going yet,” the waitress says.

“So what are you going to do? Just keep working and saving?”

“Yeah, I’m trying to get the night shifts here,” she replies.

“Yeah, we talked about that,” Medina says. “That’s where the money is, right. ... Keep grinding, girl, you’ll get there. Pretty soon this will all be a memory.” 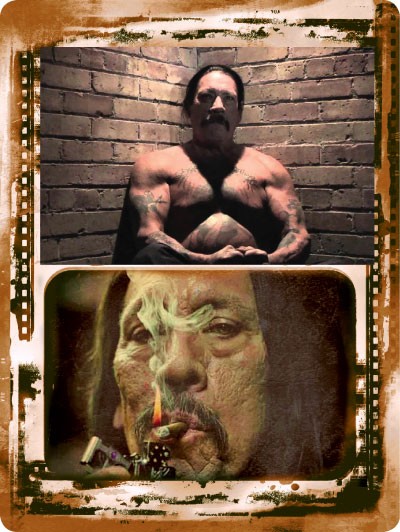 He asks if she will be there for the next few hours; after this interview, he’ll be meeting with someone else and wants her to have all the tip money.

Medina supports the “underdogs,” he explains.

With a Band-Aid on his clean-shaven face, Medina seems younger than a man in his 40s. He is wearing what looks like a diamond-encrusted crucifix around his neck and a posh wristwatch. Before eating, he removes his baseball cap and lowers his head for prayer.

As a kid growing up in the Rose Park neighborhood in Salt Lake City—a racially diverse neighborhood, for Utah at least—Medina would get dropped off at theaters and spend the day bouncing from screen to screen. Later, he got into music promotion. He says he started Utah radio station U92’s annual Summer Jam.

“I was the first person to bring rap music to Utah. I was 15 and I brought Vanilla Ice to the Utah State Fairground,” Medina says.

But someone soon changed his mind about the type of entertainment business to pursue.

“It was Cube. He introduced me to the movie business,” Medina says.

That would be the rapper Ice Cube, whom Medina met through his music-promotion business. Medina says Ice Cube later invited Medina to the set of the 1995 film Friday.

At that point, he decided to make a movie of his own—“I knew for a fact that’s what I wanted to do”—and Ice Cube had some tips. He advised that Medina write the material, Medina says, “because they can never fire you from a film if you write, produce and direct it.”

Medina began sending scripts to a friend at Lionsgate to get feedback, and used his music contacts to recruit actors. The first script was bad, according to Medina, and his friend let him know. But after some time, after rewriting and heeding advice, it turned into something he was proud of—enough so that he and his executive producer dropped, according to The Topeka Capital-Journal, $3.5 million to make it.

Although now, after Vengeance’s lack of a release, Medina seems self-conscious about the product. “You saw it,” he asks later over the phone. “It’s not horrible, is it?”

Cause & Effect
Watching the trailer for Vengeance, which has played in theaters from Utah to New York, one might get the impression that the film is similar to Rodriguez’s Machete franchise—Trejo exacting vigilante killings amid cameos by famous musicians. And that’s exactly what Medina wanted, according to previous press interviews.

In a June 2013 interview with Deadline.com, Medina said he had hoped to draft off the release of Machete Kills to spark interest in his film.

“I’ve heard Machete Kills might move its date. … If they move, we’re moving with them,” Medina told Deadline in June. Deadline also reported that Medina was offering theaters an 80/20 revenue split—well above the usual 50/50—for theaters to run his film before Machete Kills.

Medina wasn’t always trying to compete with Rodriguez—who broke into Hollywood when his first film, El Mariachi, won the dramatic audience award at the 1993 Sundance Film Festival in Park City. When Medina started filming what would become Vengeance at least seven years ago, around the time Trejo was working with Rodriguez on the first Machete, he sent a screener to Rodriguez, hoping for collaboration—maybe a release of Machete and Medina’s film together, as a Rodriguez/Medina picture, similar to what Rodriguez had done with Quentin Tarantino in the Grindhouse double feature. But, Medina says, he never heard back. And that’s seemingly when the rivalry, however one-sided, began.

Medina says he was invited to Wozniak’s San Francisco birthday party by Rick White—then the chief marketing executive of Utah’s Fusion-io, the company that had used Trejo for corporate events through Medina’s company; Wozniak is Fusion-io’s chief scientist. At the party, Medina took the opportunity to meet the multimillionaire, and asked if he would shoot a scene with Trejo for Medina’s film.

Having Wozniak in the film could help with marketing, Medina thought.

“The idea was we could do a grassroots campaign through social media with Woz and really make a mark,” Medina says.

But, Medina says, Trejo told him he couldn’t do the scene because Rodriguez was upset that Medina was actively trying to associate Vengeance with Machete Kills.

So, Medina says, he went into prayer. He asked God what to do with this opportunity with Steve Wozniak.

Wozniak agreed to record his voice and lend his image for a smartphone game called “Woz With a Coz.”

Wozniak did not respond to request for comment on this story.

While Wozniak was on vacation in Lake Tahoe, Medina says, he traveled to meet him, writing a script on the way. He recorded Wozniak’s voice for the game in his hotel suite.

After Utah-based React Games created the app, which included in-game advertisements for Vengeance as well as a Trejo character holding a large knife (Medina says it’s not a machete; you can tell by the handle), Wozniak advertised it on his Facebook page, and it quickly gained traction.

The game was supposed to come out Thanksgiving 2012 but, according to Medina, Trejo’s agent Gloria Hinojosa called Wozniak at the behest of Rodriguez and threatened to sue him if he didn’t back out of the game.

According to Medina’s lawsuit, Hinojosa told Wozniak that Medina was a fraud and a criminal who hadn’t worked with Trejo in years.

Attempts to reach Rodriguez through his agent for comment on this story were unsuccessful.

Rick White, named in the lawsuit as a witness to Medina’s account of Rodriguez’s actions, says he’s not participating in any litigation and that he hasn’t even done a deposition. He also says he didn’t know that he was listed as an associate producer in the film’s credits.

“I am not an investor in the Vengeance movie, nor have I been involved with producing, managing or otherwise working on the movie,” White wrote in an e-mail.

Medina says that as a result of the phone call, Wozniak pulled his support for the game, refused to do press interviews and took the link to the game off his Facebook page.

Thanks to that, Medina says, the game tanked, along with promotion of his movie.

How much does Medina think he lost because of this phone call? At least $11 million—to be proven in court.

Hollywood Chicanery
At the funeral of ex-con crime novelist Eddie Bunker, a good friend of Trejo’s, Medina met Peter McCardle, who had befriended Trejo through mutual acquaintance Bunker. McCardle later got Facebook to shut down a Medina-made Trejo fan page and then went on to make his own website—titled Hollywood Chicanery—blasting Medina.

Medina had been hosting a Danny Trejo fan page on Facebook that was exclusively advertising Vengeance when McCardle stepped in to handle Trejo’s social-media presence.

“We went out to promote Danny. No one was promoting Danny,” Medina says.

But when Medina refused to add other projects Trejo was working on—he says he didn’t want to dilute the Vengeance property—McCardle contacted Facebook and had them close Medina’s page and transfer the likes to the “Trejo approved” page.

McCardle says he was also the one who contacted Wozniak about the smartphone game—through Facebook, not a phone call—and warned him about Medina. After Medina sued Rodriguez for something McCardle says he did, McCardle also created a website that highlights Medina’s past run-ins with the law, including charges of sex with a minor and a conviction of witness tampering.

But Medina can explain.

“That was a relationship that ended badly,” Medina continues. “And she wanted a million dollars, and I told her to kick rocks. Next thing you know, feds kick in my door, looking for drugs.”

During the trial for the sex-with-a- minor charges, Medina said he called his ex and gave a prayer over the phone, which is how he ended up being charged with witness tampering. Medina was not convicted of sex with a minor.

There are also the online complaints by those who’ve auditioned for Medina.

“Listen, if you’re auditioning to be a stripper in a movie, and you come and audition, what do you think you have to do—you have to strip,” Medina says. “And you’re pissed off because I told you you’re too fat ... now I’m a pervert. C’mon, let’s just get real.”

Medina has contacted his lawyers about the Hollywood Chicanery website.

That’s Showbiz
So from Jack’s Law to Vengeance, from tanked game apps to licensing lawsuits, will the film come out?

Medina doesn’t know. There was a Vengeance Army campaign to give away free copies—minus cost of shipping—that never materialized. Machete Kills, which he was hoping to draft off, bombed on opening. According to Box Office Mojo, it had one of the worst openings ever for a movie—2,500 locations making only $3.84 million, a third of what Machete made.

Medina’s faith in Trejo—the next Charles Bronson—seems to be fading. He says he doesn’t know if Trejo will rebound. He thinks Machete Kills may have ruined Trejo as an actor. It’s unclear whether he is still in touch with Trejo.

When Medina is asked if this legal drama, website, and arrest record will ruin him as a director before he really begins, he shrugs it off.

“This is Hollywood,” Medina says.