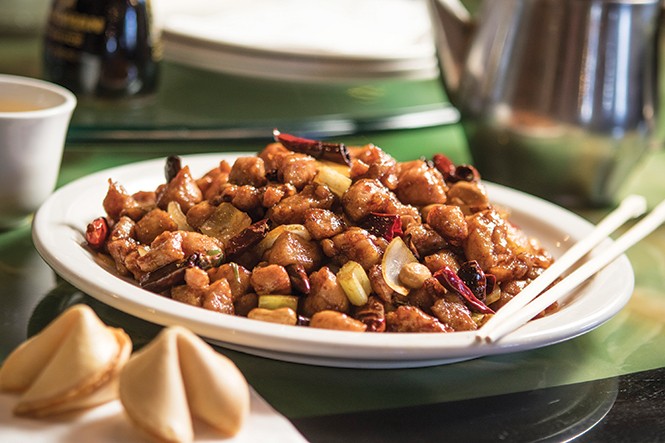 I normally consider it to be a plus when I don't see General Tso's chicken or sweet-and-sour pork on a Chinese restaurant menu. It means that I might just be in the vicinity of Chinese cuisine that's a bit more authentic and complex than the Americanized versions dominating the dining scene—especially in a place like Utah, which is rampant with cream cheese-filled wontons.

The menu at Chef Gao, in that respect, is enticing. Sure, there's the obligatory kung pao chicken ($9.95), beef with broccoli ($11.95), ham-fried rice ($7.95) and other popular staples. But there are also items that don't make the cut in many local restaurants, such as eggplant with onion and jalapeño ($10.95), fish with black bean sauce ($10.95), cumin-flavored lamb with onion, scallion, cilantro and chili peppers ($13.95), pork intestines in brown sauce ($6.95) and dried shrimp with Napa cabbage ($5.95). In fact, the very first item on the dinner menu is said to be one of chairman Mao Zedong's favorite dishes: a mélange of braised pork belly with bamboo shoots, dried red chilies and a sweet, salty brown sauce called "Mao's-style braised pork" ($12.95).

I wasn't even aware that the restaurant existed until I happened to pass it recently during a run for a Moochie's cheesesteak in Midvale. As it turns out, there are three Chef Gao eateries: one in downtown Salt Lake City, the Midvale restaurant, and a new outpost in Orem. Apparently Sweet Ginger (the restaurant's former name) had been open for years in Midvale, with a mediocre reputation at best. New management took over the operation in 2012, then opened a Salt Lake City location in 2014. I can't speak for the SLC or Orem spots, but I've grown quite fond of the Midvale restaurant. One thing is certain: You won't go home hungry or broke. Portions are gargantuan, and prices are very reasonable.

I can never resist dumplings or potstickers; they're one of my favorite vices. At Chef Gao, an order of dumplings—either pan-fried or boiled—are a mere $5.95 for 10. They tasted and looked housemade: soft, plump (we ordered ours boiled) and stuffed with minced pork (or beef) and a choice of Napa cabbage, chives, preserved veggies or celery in a wonton wrapper. Our pork and cabbage dumplings were delicious, served with a special bottle of soy-based dumpling sauce. Traditional spring rolls (two for $2.95) are another great starter, or you might want to share a bowl of the generously portioned egg drop or hot-and-sour soup ($5.95).

I always feel it's a good sign in a Chinese restaurant when the vast majority of customers are Asian, as was the case here. I try to peek at customers' tables to see what everyone's eating. During my visit, I saw a couple share a huge pot of food on a tabletop burner. It turned out to be one of the restaurant's clay pot specialties; you can get a seafood assortment ($14.95), fried tofu and seafood ($12.95) or cuts of beef such as tendon ($12.95) in a clay pot. The beef comes to the table uncooked, and guests dip the beef pieces into a pot full of hot broth, cooking them right at their table. I'd estimate that they could serve six to eight people.

One of the best menu items is called simply "spicy boiled fish" ($12.95). There was a bit of confusion when I asked a server what type of fish was used. We eventually determined that it was sole. Plan on sharing this item with a few people because it's a very large bowl of oh-so tender and juicy boneless sole fillets bathed in an incendiary red broth with shredded Napa cabbage, green onions, garlic and other veggies. Two of us could barely put a dent into the spicy fish, so we took it home and enjoyed for days to come. Fair warning, though: This dish is super spicy. Thankfully, big bowls of steamed white rice come gratis with most orders; you'll need it to tone down the heat of some of the authentically spicy fare.

Somewhat oddly, there are empty wine bottles on display in the front of the restaurant, yet no wine is available—just beer. A Tsingtao beer, however, was the perfect accompaniment to my favorite dish: shredded pork with Beijing sauce ($11.95). Normally, Beijing sauce is a fairly common blend of oyster sauce, rice wine, sweet bean sauce, ketchup, sesame oil, corn starch and egg. At Chef Gao, shredded pork—a mountain of it—is somehow infused with the flavor of Beijing sauce, but the dish isn't the slightest bit saucy. It's dry, but very flavorful. The serving was so big that I literally had leftovers for lunch three days in a row.

Stir-fried, thinly sliced beef with flat, wide rice noodles, bean sprouts, shredded cabbage and onions ($8.95) was bursting with flavor, and I loved the texture of the noodles, but the dish was a bit on the oily side. Next time, I'll try the noodle soup with pork and mustard greens ($6.95) instead.

By the way, for you late-night types, the Midvale location has a cash-only "late night" menu available after 9 p.m. with 60 different items priced at $5.49 apiece. That's a hard bargain to beat.