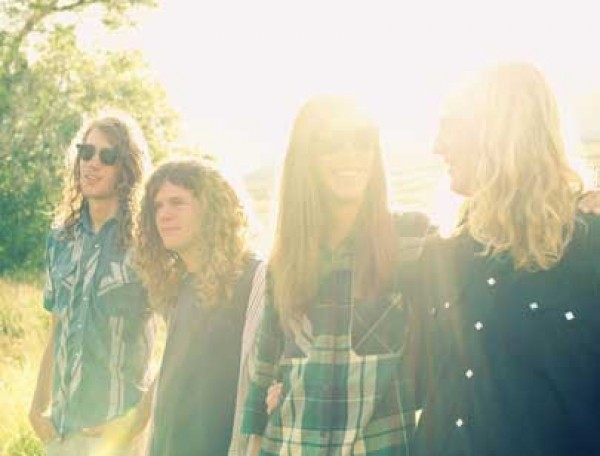 The men of Holy Water Buffalo have beautiful hair. They get that a lot.

As we sit on leather sofas in the Stein Eriksen Lodge after they’ve finished an outdoor set of rock & roll, four middle-age women stop to compliment them—more about hair and, alas, less about music.

If nothing else, those dozens of inches of locks are almost like a barometer of how engaged they are in concert. Brunson says they always give it their everything, and their stage persona is most memorable from that hair-flinging night when they rocked their 2012 City Weekly Music Awards showcase.

The four-piece’s Wasatch County contingency was out in full force for the punchy set; they’re as proud of the Heber rock scene as one might imagine. “Well, there’s not really a Heber scene. We’re it,” Brunson says with a laugh. As such, they’re celebrated locally. The crowd of mostly female fans whipped their hair around as much as the band to relentlessly driven, no-frills rock off the 2010 self-titled debut, including three of their best tracks: “I’m Alright (It’s Heavy),” “Hands of Dust” and “Better Kind of Love.”

Holy Water Buffalo’s strongest asset is their passion—from the moment they took the stage, they owned it and held the audience captive. “We give it our all at every show, no matter how big or small the crowd or where it is. It’s always 100 percent,” Brunson says.

“People want real-ness; that’s what they really want,” Brunson says. And as the four players kindly thank the women at Stein Eriksen, it’s obvious that they are that four-letter word so often not said in rock music: nice. If there were an ethos aside from a musical sensibility harking back to ’70s rock, it is egoless playing—as in, they are cohesive as a group, and certainly not pretentious when onstage.

“Music is not selfish. It’s not egotistical. It’s beautiful. It’s love. It’s magic or some shit,” Brunson says. “When the energy is shooting back and forth like lightning, we feel it from the crowd. I don’t get why some bands wear sunglasses at, like, 1 a.m. Look at someone in the eyes, man.”

The Heber rockers also have a steady work ethic that keeps them constantly gigging around Utah—“We’re booked out for the next four months,” Brunson says. Come the end of August, they’ll head out on their first tour, a two-week stint to the Northwest. On tour, they’ll continue to road test two new songs—“Lamborghinis in Space” and “Better to Remain”—that the hair-lovin’ women danced to this evening. They have one more new, unrecorded song, along with a slew of sketches and ideas to be hammered out for a follow-up album, although the release date is up in the air, Siggard says.

On the new direction: “We’ve been listening to a lot of Queen recently,” Siggard says with a snicker. In actuality, the sound comes from a hodgepodge of influences—from Vanderlinden’s love of metal to Siggard and McDonald’s classical training and jazz pedigree to Brunson’s upbringing on all things singer-songwriter. All together, it’s just fun, egoless rock.

And you can throw a little gospel music in the mix, to boot. All four members play that genre on Wednesdays and Sundays at the Worship Center, a church in north Heber that was also, until recently, the home of their rehearsal space. “[Playing gospel music] kind of helps you get over that whole stage-fright thing,” Brunson says. “Some bands are all out for themselves and how cool they look up there ... [but] I don’t know, for me, music is all about surrendering, to everything that is going on around you.

Just a few days before this gig, they were all touched by music—the pinnacle of artistry—while they were playing. “The other day, we were playing this wedding, and we were all bawling—we could barely play. We played their dance song,” Siggard says.

“That feeling that people get when music touches their heart ... I would die for that feeling,” Brunson says. “That is more important to me than anything else.”