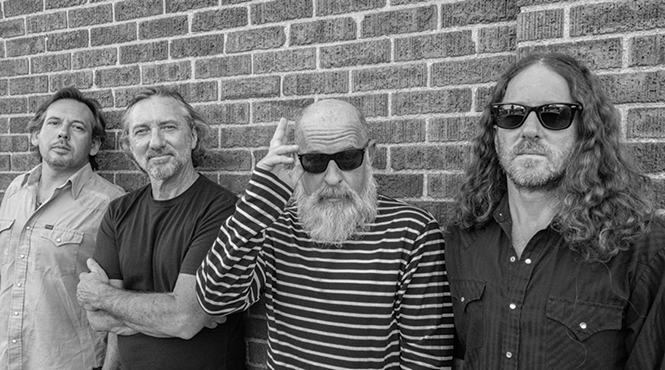 Jerry Joseph and The Jackmormons' upcoming Salt Lake City performance is a homecoming of sorts. After recording nearly 30 albums over the course of 35 years, Joseph has carved out a critically-acclaimed career that originally began here.

Joseph has frequently resettled—he currently lives in Portland, Ore.—and is consistently on the move, whether touring, visiting war zones and handing out instruments on behalf of his non-profit, Cosmo Music Relief, or simply traveling for his own enjoyment. (He recently returned from a trip up the Amazon River with his 8-year-old son.) Nevertheless, he admits that Utah made an indelible impression on him early on—one that lingers even now.

"I first came to Utah as a San Diego kid," he says on his way to pick up groceries the day before Thanksgiving. "I was in a lot of trouble when I was young. I was deported from New Zealand when I was 16 years old. A judge told my parents if they put me in this lockdown facility in Provo, Utah, they wouldn't press charges against me. So I ended up in Provo, where I spent lots of time in isolation. Then I got out and got in more trouble, so I went to Logan at one point to hide from the police. And that started this weird little world for me."

That "weird little world" eventually grew to envelop a music trajectory that Joseph has pursued relentlessly ever since. "My first band, Little Women, started in Logan," he explains. "In 1995, I had just gotten clean from heroin and was living in Montana when somebody asked me to come back down to Utah and do a show. I was totally broke, but they offered me $1,000, which was a shit-ton of money to me. When I arrived, this drummer named Brad Rosen and bass player named Junior Ruppel were waiting for me, and they said, 'We're your band.' That was the origin of The Jackmormons. I moved there to be in that band. Junior was a returned missionary and the unequivocal father of the Salt Lake City punk rock scene."

Joseph estimates that he spent five years in Utah, the latter two in Salt Lake City. "I'm a Catholic kid, but I didn't know what a Mormon was until I got locked up in Provo," he remembers. "Then I got a crash course. I hated the Mormons, but once I got into The Jackmormons, we wanted a name that sounded like we were from Utah. For the record, it's the worst name in the history of rock 'n' roll. I didn't know it would turn into this international band that would play for the next 30 years. I thought it was going to be a way to help me keep clean."

Utah's capital influenced him so much that he chose it for the name of his band's 1998 album, Salt Lake City. "I always thought that was a pretty good record," he says. "We recently started playing the title track again because I think it's a great song." Laughing, Joseph adds, "I can understand why they didn't use it as the city's theme song." But he insists it's helped him maintain his ties to Utah after all these years.

Unsurprisingly, the city also spawned his interest in theology. "My favorite thing about humans is the moment they offer themselves up to God," he says. "Whatever they do a few minutes later, all bets are off. But that's the quintessential human moment—and I've witnessed it all over the world." Joseph remembers that his Utah roots (and the name of his band) led him to dig deeper into Mormon history. "I had to know what the fuck I was talking about," he says. "I had to learn about the Mormon church. At one point, I knew more about it than Junior, my Mormon missionary bass player. When I played in Germany, they'd ask me, 'So Jerry, tell us why you hate the Mormons.' I don't hate the Mormons. I became the de-facto defender of the Mormon church."

Joseph says Logan was an authoritarian place in the early '80s, but he remembers it fondly. "I learned a lot there," he says. "I had relationships there. My two oldest children were born in Logan." Joseph says Utah influenced the external attention paid to The Jackmormons more than the actual sound of the hard-driving rock 'n' roll band. Still, after all these years, Salt Lake City holds a special place in his heart. "I was always surprised there weren't a lot more bands that broke out of that area," he says. "I used to really like my identity as being from Salt Lake City."