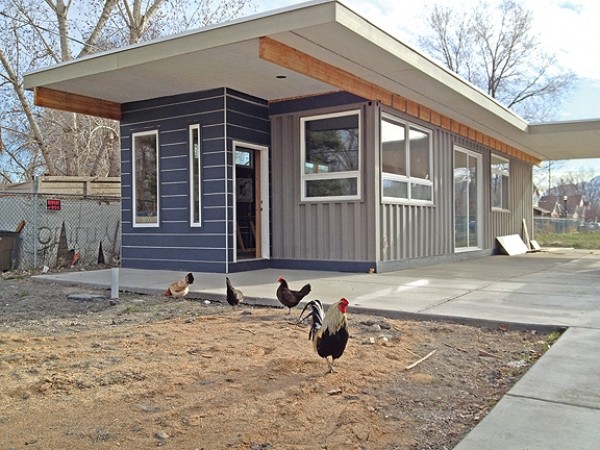 The housing problem in Salt Lake City and the country is as stark as it is simple—not enough affordable homes leaves the economically vulnerable worried about keeping a roof over their heads. Now, a Salt Lake City man is taking an out-of-the-box approach to one of the problems of poverty by offering an in-the-box solution: “tiny homes” cheaply and efficiently constructed out of used shipping containers.


Jeff White, a real-estate broker and volunteer for low-income advocacy group Crossroads Urban Center, looked at what shipping companies scrap as junk and saw a treasured home. He decided to work on a design for the containers, which are shipped all over the country before sitting empty or being discarded, to repurpose them as low-income housing.


White has been working on this project for two years and has taken it from a pet project to one that’s found the support of Crossroads Urban Center and the office of Salt Lake City Mayor Ralph Becker. Becker’s office helped provide a grant for purchase of land for the unique abodes. White hopes to have a house ready to go and up for sale within a month, providing the first model of a new line that he hopes will catch on in the city and elsewhere.


White got the idea for his Sarah House Utah project from an elderly artist friend of his in San Francisco, who often found herself priced out of her living situations in the city and would have to move from one place to the next.


“Every time I went down there, it felt like I was moving this 75-year-old woman around,” White says. As a real-estate broker, White recognized that low-income single adults, especially seniors, were a demographic that could benefit from a small but affordable housing option. He also became enamored with the “tiny home” movement in homebuilding, which emphasizes small homes, and realized shipping containers could be the affordable skeleton of a tiny home.


White began Sarah House Utah as a hobby, working on a 40-foot-long, 9-foot-6-inches-tall and 8-foot-wide container in the driveway of his Sugar House home. That’s when, he says, “Ralph busted” him, after a city inspector took issue with White improvising a home on his property. But shortly thereafter, White says, Becker became intrigued with the project and began putting his office behind it, making things easier with city permits and inspections so that it could move forward.


White could also count the Crossroads Urban Center as a partner in the effort. White has long volunteered for the nonprofit, which has taken the lead on this first house, working with the city to secure a grant to purchase the .17-acre plot in Glendale where the house is located.


Glenn Bailey, executive director of Crossroads Urban, says he expects that White will be able to spin out from the project to create his own startup if Sarah House Utah is successful.

Bailey expects that the cost will go down in the future, as White will have design plans figured out and will know how to better work with the city permitting process. Bailey says that it’s the goal that homes will eventually be sold for between $60,000 and $80,000.


“The hope was to demonstrate what could be done and learn from this first project and how to make the process of building it more efficient and make the homes even more affordable,” Bailey says.


The first home was not without challenges, as White struggled to find architects who would seriously look at how to fit a metal box with all the amenities of a modern home.


“I just about got chased out of a couple architects’ offices when I came to them about this,” White says with a laugh. But eventually, the project attracted its share of people excited about its challenges and potential.


The home currently sits in a quiet Glendale neighborhood. Two shipping containers have been joined together on a concrete foundation, painted gray and sandwiched between a 1920s home and 1950s model home. It’s a design that catches the eye—in a good way. The home holds a living space, a kitchen, a bathroom—with shower only—and a small bedroom. The home is filled with natural light, as narrow windows line the north wall. It even has an innovative Mitsubishi mini-split heating/cooling system. Since the space is so small, the heater has an optical eye that follows movement in the house and directs heat or cool air to wherever the homeowner is—no space-wasting ducts necessary.


The green factor on the home also helps with the cost of ownership, White says, estimating that the energy bill will likely only cost $45 a month. White’s had good support from the city and community partners who, he says, recognize the model as being useful for low-income singles who might not receive support from charitable organizations like Habitat for Humanity, for example, which provides housing for families.


White is also working on the side to raise money for the project with another unique idea—by creating and selling ornate funeral urns. The urns are expensive compared to other urns, but cheaper than caskets.


“It’s a rather unique way of running funds for a nonprofit—getting the dead to pay for the living,” White jokes.


But while the housing project has been helped by city officials, White says it’s also been hindered by a recent ordinance. The small homes would be ideal to be placed on existing properties under the city’s accessory-dwelling ordinance, which allows for construction of mother-in-law apartments and the like on homeowners’ existing properties. That ordinance, however, was changed September 2012 so that those units could only be constructed within half a mile of TRAX stations.


Salt Lake City Councilman Kyle LaMalfa is a big supporter of White’s home, which is located in his District 2, and is also disappointed by the ordinance change.


“It’s kind of a sad story,” LaMalfa says of the ordinance, which now seems to have halted permits for accessory dwellings. “So far, six inquiries have been made and zero permits have been issued, because they are not in the qualifying area.”


Still, it’s early in the shipping-container-home revolution, and White is optimistic about the future and the potential the home offers for a certain kind of person.


“It’s certainly not the type of home for people looking for mini-mansions with home theater rooms and gated communities,” White says. “These are for people who want a home with a small carbon footprint and enough room to hold their gear, a couple of pets and raise a garden.”