TO FIND A SAFE PLACE

In the eight years since Canenguez first left El Salvador for the United States, gang violence was on the rise. Geovanny, Canenguez’s third-oldest son, was terrified when he woke up one morning in March 2010 to find police at the house next door. Two adolescent girls had been raped, killed and cut into pieces after one of them refused to date a gang member.

Her children, so small when Canenguez left, were growing up. Most of Job’s friends were gangsters “who kill or are killed,” he says in Spanish. Gang members followed him to school and told him he had to be “a soldier” or else they’d kill him. Geovanny, then 13, told Job that gangsters stopped him and demanded he join them.

When Job called his mother about the threats, Canenguez knew she had to bring them to the United States to “ponerse a salvo”—find a safe place. Even the dangers of reaching the U.S. border—according to a ProPublica report, “293 Salvadorans had died or disappeared in Mexico between 2007 and 2009”—paled before “what awaited [my children] in El Salvador,” she says. 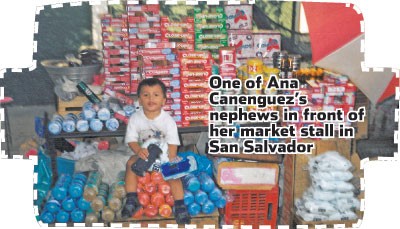 She wanted all four of them to come to the United States but didn’t have the money to pay for their travel. Job and Geovanny eventually crossed the U.S. border with five other children, Job recalls, with the youngest, his brother, at 13; the oldest, 17. He describes a terrifying journey, in which predators, whether armed cartel members or snakes in the desert, constantly threatened them.

When they realized the border patrol was close, exhausted after walking for hours in the desert, they gave up, sat down and waited to be arrested. The Department of Homeland Security issued the boys with Notices To Appear before an immigration judge in removal proceedings, but they were eventually turned over to their mother in Tremonton to await a court date.

Job and Geovanny arrived in Tremonton in the spring of 2010. By then, Canenguez’s eldest son, Jose, had started a family with his girlfriend, Andrea, who had come from El Salvador to make a new life with him in Utah. Canenguez, while overjoyed to see her children, was also preoccupied with dealing with her one brush with law enforcement resulting from an altercation with a couple in Tremonton.

She had been waiting to put her children on the school bus when a Peruvian mother had pushed in front of the line to put her children on first. Canenguez and the mother argued. The Peruvian and her husband followed Canenguez to her home. Canenguez called 911 and in her broken English told the dispatcher, “I need help,” but couldn’t explain more. The man held her so his wife could “educate” her, the woman told her, by punching her. Canenguez kicked the woman just as the police arrived. The Peruvian husband, who could speak English, gave his version of events to the police, who had to wait for an interpreter to talk to Canenguez.

She was charged with assault and disorderly conduct in Tremonton justice court, was found guilty of two misdemeanors, and requested a trial de novo—effectively vacating the original sentences. However, at 1st District Court in Brigham City, her conviction of disorderly conduct was amended to an infraction.

Despite this setback, Canenguez was emerging as a local leader in the migrant-worker community in Box Elder County after she enrolled the two children she had with Granda in the Head Start Migrant program in Honeyville in 2010. Debbie Justice is executive director of The Learning Center, which is part of Utah’s Head Start Association. She says Head Start is typically seen as a preschool program, “when it’s actually a family-development program.” Along with studying and passing exams that took her to a ninth-grade education, Canenguez volunteered at the center, whether it was cutting the grass, breaking up a huge pile of boxes or cleaning.

LOST IN THE DESERT

In spring 2011, Canenguez was elected president of the parents committee for the Honeyville migrant center. Under her presidency, center manager Benjamin Wynn wrote in an application to nominate her for Utah Head Start’s Parent of the Year award, “parent participation at the meetings increased, hours of in-kind [volunteering] increased, and the funds the parents raised increased dramatically.”

Her election, however, took place in her absence, which was due to an anonymous phone call her estranged husband in El Salvador received in April 2011 threatening the lives of her two children, Mario and Erick, who were still living there. “We need you to give us $25,000 to not hurt your children,” the voice said. When her ex-partner protested that he didn’t have the money, the extortionist replied, “You don’t, but your wife does.”

“It felt like a sniper is pointing at you,” Canenguez says. She raised the funds to smuggle the children across the border, only for the boys, ages 10 and 12, to be arrested when they reached Mexico by federal officers.

With the help of the Salt Lake City Mexican Consulate, Canenguez was able to get a visa to go to Mexico, where she spent two months fighting red tape to get her children out of a Mexican orphanage near Puebla. Mario, who was 2 years old when his mother left, only recognized her because she looked similar to his aunt.

She arranged for a guide to take them across the border, but Canenguez’s luck ran out on her second attempt to enter the United States illegally. The coyote who was leading them and seven others across the scalding-by-day, freezing-by-night desert became lost and wandered in circles. At dawn, the rest of the adults went off in search of water. Canenguez concentrated so much on praying for the sun-stricken coyote that she didn’t realize that 10-year-old Erick was no longer by her side. He’d left with the others in all the confusion.

Canenguez scrambled up hills, then slid down them in a welter of stones, all the while screaming Erick’s name and clutching Mario’s hand. For hours they ran across the endless desert, the distraught, desperate mother begging God to “wake me from this nightmare.” After five hours, she says, still running, still searching feverishly for her little boy, she looked up at the sky and pleaded with Jesus, “Help me, help me.” A few minutes later, she says, she spotted tiny figures in the distance, walking up the side of a white mountain, her son trailing behind.

The three wandered lost, without water or food, for hours, until they found a house with an old trailer and some animals. When a man drove up, she asked him to contact the U.S. Border Patrol so they could turn themselves in.

Homeland Security issued Canenguez and her children Notices To Appear before an immigration judge in removal proceedings, before releasing them on their own recognizance to begin the legal process of fighting their deportation.

Now, with the threat of removal to El Salvador, Canenguez and her children face a potentially dark future at the hands of Salvadoran gangs. “I’m afraid if we get there, gangsters will kill Job and Geovanny for escaping,” Canenguez says.

Her attorney Sharon Preston doesn’t think she’s exaggerating. “Their lives are truly in danger,” she says.

Canenguez and her children have pursued asylum claims, citing the dangers they would face in El Salvador. To qualify for asylum, you must be able to demonstrate a fear of persecution because of one of five key elements: your race, nationality, political opinion, religion or membership in a particular social group.

In El Salvador, says Canenguez’s son Mario, minors are a valuable commodity for gangs such as MS-13, or its archrival, M-18. Once recruited, Canenguez says, what savage crimes they commit rarely, if ever, result in prosecution, in part because witnesses are too terrified to testify against them. But being threatened with death by a gang if you don’t join their ranks doesn’t provide the “particularity” U.S. law currently requires to grant asylum.