Canenguez’s own fate is also bleak if she’s deported. Whoever threatened Erick and Mario knows that she was able to raise money to take her children across the border. It could be a neighbor, a friend, or someone she doesn’t know. Whoever it was is “sure we have money,” she says.

If they are deported, not only will she have to find work and a home for them, she will also have to deal with the fears of someone demanding an exorbitant monthly “tax.” She recalls a couple, both evangelical pastors, who were deported to El Salvador and then told by a gang they had to pay a tax. When they couldn’t manage the payments, they were killed.

What little money Canenguez earns cleaning rooms goes to attorneys. Such excuses for her empty hands will not protect her from extortionists. “They kill you if you don’t have the money,” she says.

If the U.S. government does move forward with deporting Canenguez and her four children, her partner, Eusebio Granda, doesn’t know what he will do. Their two U.S. citizen children who benefited from two years at the federally funded Honeyville preschool now face a future without their older siblings and their mother’s loving guidance. “It’s something we haven’t spoken about,” he says, something that none of them can bear to address.

Gonzalo Palza is chief executive officer of the federally funded Centro de la Familia, which runs the Honeyville preschool. “If we are not able to retain the parents to nurture their children, then we are being very ineffective in our mandate,” he says.

THE BUSINESS OF MIRACLES

The only remaining legal resource available to Geovanny and Job to fend off their deportation is a 10th Circuit appeal their current attorneys, Christopher Keen and Ed Carter, say they will file in late January.

Carter says the boys “never had a chance to make a good substantive claim about what they want to do with their asylum application.” He describes the application that had been prepared by an earlier attorney on the case “as a superficial description.” He spies a legal argument in the family’s commitment to education as offering a “particularity.”

“I think there are deeper things there than just gangs wanting to beat you up,” he says. “Somebody at that age, to have a commitment to getting an education, even though separated from his mother, should be rewarded.” He argues that issue has not yet been addressed. “You just want to feel like you’ve had a chance to make your case, that you’ve received all the process that was due.”

Attorney Preston told Canenguez up front that there was no hope in pursuing an asylum claim for her, or for Erick and Mario, but since they “honestly feel their lives are in danger, I had no choice, I had to try.”

On Oct. 31, 2012, an immigration judge denied their asylum application and ordered them deported. All that’s left, other than an appeal, was Preston’s request to Salt Lake City’s ICE office for prosecutorial discretion. With far more administrative violations than the system can handle, ICE has the power to shelve “nonpriority” cases—those that don’t pose a threat to national security or public safety.

The five family members are “going to all stand together or fall together,” Preston says. But miracles do happen, even in the labyrinths of immigration law. “I have witnessed miracles. They were based on good luck and some little avenue in the law.”

PARENT OF THE YEAR

Canenguez’s caseworker at Centro de la Familia recommended she be put in for Parent of the Year in early 2012, after having heard the story of her struggles to find a future for her children after Oscar’s death. In June 2012, Box Elder Migrant Center manager Benjamin Wynn received an e-mail from the Utah Head Start Association informing him that Canenguez had won. When Wynn told Canenguez, “she was ecstatic and started crying for joy,” he wrote in an e-mail to the association.

On Nov. 3, 2012, Canenguez went with her family to receive the award at the 2012 Utah Head Start Association conference, which was held at the South Towne Exhibition Center in Sandy. When Gonzalo Palza said hello, she was unable to respond. Was something wrong, he asked? “They’re going to deport me,” she said in tears. She told him that two days before, an immigration judge in Salt Lake City had denied the asylum application for herself, Erick and Mario and ordered them removed. 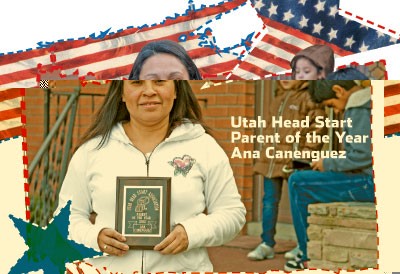 Upset, Palza asked her if he could tell those in the room what she had shared with him, then urged her and her family to join him onstage. He told the audience of several hundred Utah Head Start employees not only why she had won the award, but also her life story, culminating in imminent deportation.

The audience members, many in tears, gave Canenguez a standing ovation.

As she recalls the bittersweet events of that afternoon, Canenguez shakes her head. “One day they’re telling me I had to go, the next day they’re giving me …” she says in Spanish, her voice breaking.

Among those applauding Canenguez was Learning Center’s Debbie Justice. “The federal government drives me crazy,” she says. “Head Start is not allowed to ask the immigration status of any individual. We do this great job of helping folks, of making these great immigration success stories, and then we turn them out.”

Palza expresses similar frustrations. “We struggle to serve children and prepare them for their first years at school, and, indeed, are mandated to do so by the federal government,” he says. “On the other hand, we are faced with the forced dislocation of families, which, if widely prevalent, would make our efforts mostly self-serving exercises, and a grossly inefficient use of federal funds.”

Canenguez is not the only one in her family whose hard work has been recognized. Job, a soft-spoken 18-year-old, is as committed to education as his mother, attorney Preston notes. In the 2 1/2 years since he arrived in Utah, he’s learned English to the point he helps other students, has won an achievement award and earned a glowing recommendation letter from Bear River High School vice principal Chad Kirby, who writes that since Job arrived in Utah, he “has worked hard to get everything accomplished so he is on pace to graduate. … He has a tremendous future ahead of him and I would hope that we would allow him to reach his full potential.”

When Job met Preston, he asked her, “How can I go to college?” While undocumented children, traumatized by their experiences, “often get into trouble,” Preston says, Job and his brothers are focused only on their education. But while she sees hope in the faces of the younger children, in Job’s features she sees knowledge of “what’s going on.”

All Job wants, he says, is an opportunity “to study here, to get ahead, to get a good job to help my mother who has worked all her life.” All the future holds in Central America is poverty and violence—or worse. The aspiring reporter believes his father has nowhere to live and that he himself is on a hit list. “If they see me, they will shoot at me. My country is so small, they find you very quickly.”

When the topic of immigration comes up in conversation, Job becomes sad, he “loses his strength,” Canenguez says. Still, she holds out for a miracle, be it immigration reform, a last-minute legal reprieve, either from the appeals court or prosecutorial discretion.

But in the final week of 2012, ICE’s spokesperson Virginia Kice informed City Weekly in a statement that Canenguez and her four El Salvador-born children had not been granted prosecutorial discretion.

Kice noted that Canenguez had recently crossed the border—a significant negative factor for ICE when considering prosecutorial discretion—and has convictions lodged in Box Elder County for disorderly conduct in February and April 2010. That, however, is misleading, given that Canenguez appealed the justice-court case as a trial de novo, resulting in a single infraction for disorderly conduct in district court.

When City Weekly informed Canenguez of ICE’s decision to not grant prosecutorial discretion, the line went silent for a moment. Then, she said in soft, disbelieving tones, “They didn’t?”

Debbie Justice says Canenguez’s story “seems like a huge tragedy. Her kids are doing great now and they’ve got to go.” Her hope for Canenguez, what she calls “my happily ever after story,” is that wherever she and her children end up, “she continues to be a great advocate for her children, her family and the community.”

For now, Canenguez pushes Job and her other children to learn, to realize the gift and the potential America dangles before them. “Here we haven’t a future, we’re undocumented,” Job told her once.

“Who told you that?” she replied. “You have to study, until the very last day.”