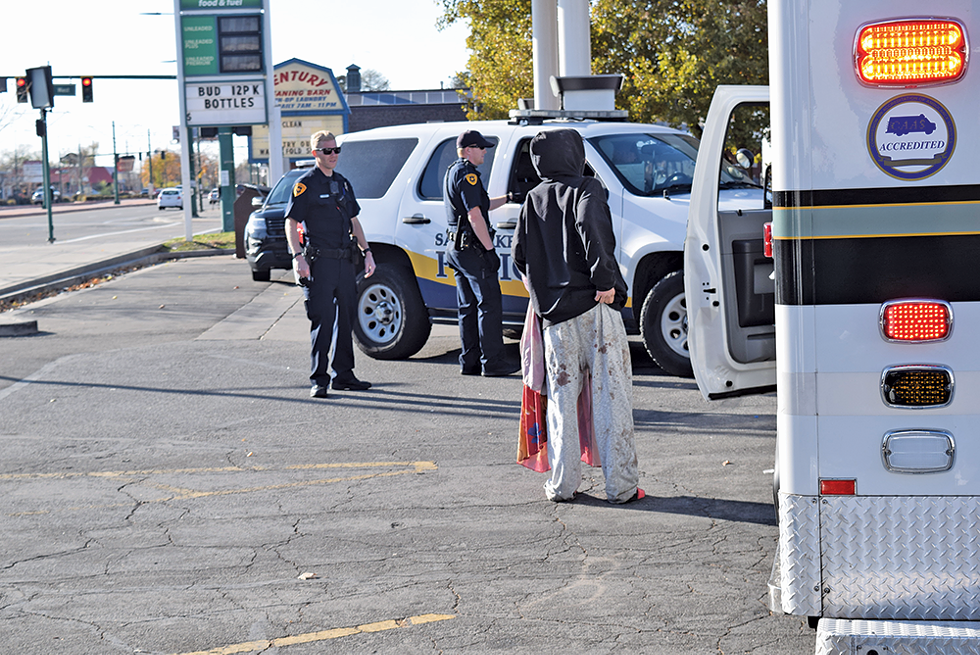 One ambulance and three Salt Lake City Police cars rush into the parking lot at the corner of 900 West and North Temple. When they arrive, they find a homeless woman with what appears to be a bloody sheet and bloody clothes. Someone had seen her and called 911.

But almost as soon as law enforcement arrive, they leave. False alarm. The cops talked with the woman, who then went on her way. The scene, however, is familiar for those living and working in the area. Stories like it are common ever since Operation Rio Grande commenced in August 2017, when many homeless persons sought refuge in nearby neighborhoods like Rose Park and Poplar Grove.

"I call that lane the hooker pickup lane," Kimberly Brainerd, who works at a nearby convenience store, says, pointing to the outside lane of gas pumps. "Cars will drive in slow, someone gets in, and they're gone."

She tells City Weekly she's seen so many drug deals in the parking lot that she probably could compile a Who's Who of the dealers and their clientele.

"I've got customers that don't come back anymore, because people would be coming up to them asking, 'Do you want some black; do you want some white,'" she says. "It gets real uncomfortable sometimes."

A light behind the shop is out. Brainerd says she's witnessed various criminal activities there because it's dark. She hopes the landlord—or someone—replaces the burnt-out bulb.

It might sound bleak and disturbing, especially when you look across the street and see the police department's part-time substation at an old Arctic Circle building, empty on this November afternoon. But that doesn't mean police aren't out patrolling the area. Police cars are seen every few minutes passing by on North Temple. Cops on bikes also ride around the neighborhoods.

While the nearby intersection has turned into a hotspot for criminal activity, some neighborhood advocates say the situation has improved since this time last year, and even more in the past six months thanks to increased availability of services. Mike Harman, who serves on the Poplar Grove Neighborhood Alliance, says he's optimistic about the future, particularly when it comes to the new homeless-resource centers expected to open around the city in 2019.

"People are engaged in the neighborhood and the homeless folks are getting the services they need," he says. "I think with the resource centers coming on line—dissipating some of that concentration in one area—I hope will be helpful, where they actually have a place to go."

"Urban camping," as it's known, was the first most-noticeable change to the Poplar Grove area. Homeless camps popped up along railroad tracks, the 9 Line Bike Trail and other open areas. Their numbers have been noticeably reduced, Michael Clara, community organizer with Crossroads Urban Center and former planner with the Utah Transit Authority, says.

"It's been a good experience for the neighbors; it's been very empowering to see we were not victimized by this," Clara says. "That was the accusation I was definitely freely throwing out there in the beginning, but every prediction I had was, 'This is how they're going to solve this: People [the homeless] are going to settle in our neighborhood,' but I was proven wrong on that."

Driving around Poplar Grove, Clara stops near a park at 1000 West and South Temple and points to a man near a table with a shopping cart. The park is emptier than it used to be in early 2018, Clara explains, and months ago, you could see more homeless people around the park. But neighbors now don't have to call in as much to report nuisance problems thanks to more frequent patrols.

"This is a good place to hide," he explains. "If we were to go look, we'd see needles and stuff, but we hooked up with the needle-exchange people and they come and pick up the needles. As a community organizer, I'm like, 'Damn, I don't have anything to complain about.' But it's not even about complaining; it's what are we doing to make this place we all share a better place?"

Around the block, another man walks down the sidewalk pulling a rolling bag. He shouts various times and makes swinging motions with his arms. Clara speculates it's likely some sort of mental-health issue, something he and other homeless resource advocates are hoping to help solve by making treatment more available.

The first new resource center—the Geraldine E. King Women's Resource Center near 100 East and 700 South—is expected to open in June 2019 with others following not long after. The Road Home Shelter is expected to close sometime in 2019 as part of Operation Rio Grande's plan. Clara and Harman say they've been happy with the police response in the area. Clara says he knows police are curbing some of the drug dealing, prostitution and other violence, but their reach has its limitations. Police Chief Mike Brown "told me, 'Using the police to solve the homeless issue is the most-expensive and least-effective way to address it,'" Clara says.

"So as a community, the next step is for us to look at where is treatment going on and why is it a revolving door at the jail. That takes a little more organizing and effort for us to do that. But again, when it comes down to the police, they've been responsive," he says.

Clara next tells a story where he's worked with community members to be a little more vigilant when it comes to helping law enforcement. Neighbors called police because they heard what sounded like people beating up someone next to an overpass on 200 South. Officers drove around the area and at first didn't see anything. The neighbors called Clara next and he told them to call police again and meet law enforcement when they show up. Clara also drove over to the area.

"The cop came over and said, 'That might be the Highway Patrol and stuff,'" Clara recalls, pointing near the soundwall along Interstate 80. "I was standing by the door and [the woman who called] looks over at me and I said, 'Tell them to call the sergeant over here.' So when she tells them that, he says 'Alright, we'll go look.' ... Luckily, the cops did walk up there and I gave them a lot of praise on Twitter because had they just driven by, who knows."

Not long after, Clara and others nearby saw police talking to a woman with a bloody face.

Some like Brainerd, though, who work near North Temple's "Ground Zero," are losing patience. She says she used to call the non-emergency number about crime more often, but when illicit activity kept returning to the same spot, she grew tired. When she closes up for the night, Brainerd says she and other employees try to get to their cars as soon as possible to avoid being approached by anyone.

"They just keep moving [drug dealers and the homeless] one way or another," Brainerd says. "It hasn't stopped it one bit. It did a little bit at first and everyone dispersed, but they came back because they realized they aren't going to do anything."