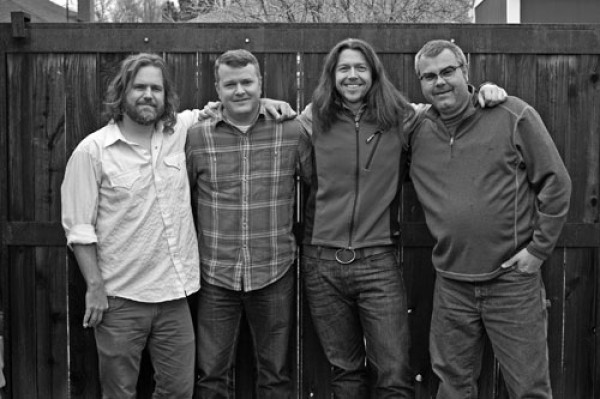 It’s obvious when something just clicks, be it two people getting along like a house on fire, a delicious meal coming together with only a few simple ingredients or a conversation among friends progressing organically. For the three founding members of local alt-country/rock band Honey Pine, their songwriting chemistry was so effortless that it persisted even through a decade-long hiatus from making music.

In the late ’90s through the early ’00s, main songwriter Matt Hansen (guitar, lead vocals), Dan Salini (guitar, pedal steel, fiddle) and Bucky Cash (drums) all belonged to a band called The Trigger Locks. After the project disbanded and that thing called life happened, the three musicians went their separate ways, with Hansen and Cash needing to spend time with their growing families.

While their paths would cross from time to time and they’d mention picking up music again, for a while, the timing just wasn’t right to get everyone back together. “I’d been bugging [Hansen] for years to play music and … it just wasn’t time,” Cash says.

But finally, in 2012, the pieces fell together, and Honey Pine—named not for a tree, but “to pine for something sweet,” Hansen says—was formed. “Matt’s kids were old enough and my kids were old enough that we were able to start doing it,” Cash says. “And then Dan was a natural third piece.”

In October 2013, the lineup was completed with the addition of permanent bass player Jason Rock, a fellow fixture in the local music scene.

“Salt Lake is so incestuous with bands,” Hansen says. “We’d all played in different bands and Jason had played in other bands that we opened for or he opened for us. If you’re in the music community, to an extent you know half the people just from playing.”

Rock took the post after a few previous bass players in Honey Pine had come and gone. “Some bands just have that one really tough spot to fill, and Jason finally filled it for us,” Hansen says. He adds that Rock’s skill on the stand-up bass “added a really cool element to our playing,” and gave the band the choice to perform with either a fully acoustic setup or an electric one. Honey Pine is also occasionally joined by keyboard player Dave Petersen.

Now, Honey Pine is releasing their self-titled debut album, which the band says benefited from the fact that it wasn’t recorded until they’d been together for more than a year, with Mike Sasich at Man Vs. Music. Not being in a hurry to release the record, Hansen says, gave Honey Pine the breathing room to “filter the songs, so hopefully, the song selection on the album was at least handpicked a little bit more. Because I’ve been in those kinds of bands where you just hurry and write stuff as quick as you can and play it, and they might not be great songs.”

Influenced by country legends Johnny Cash and Merle Haggard and even the Grateful Dead’s more twangy material, Hansen says a lot of the inspiration for his lyrics comes from his “weird relationship with religion.” But the tunes on Honey Pine don’t unfold like weighty existential musings, since he relies heavily on metaphor to keep the meaning of the songs open to interpretation. “If you write music, I think that you write in code a lot of times, and that’s how I end up writing a lot,” he says.

If there is indeed a hidden philosophical element in upbeat songs like “My Side of the Mountain” and “Never Worked Anyway”—which features a guest appearance by Bad Brad Wheeler on harmonica—it’s given a down-to-earth feel by the album’s homey sound. Country-fried guitar, smooth vocal harmonies and warm pedal steel create a rootsy sonic setting for the type of universe-pondering that perhaps longtime friends would casually get into over gin & tonics.

Such an easygoing approach has served Honey Pine well. The opposite of the type of band that sprints to release material and perform as much as possible, Honey Pine is content to take the scenic route.

“I like that it hasn’t been like rush, rush, rush,” Salini says. “It’s kind of had an ebb and flow to it, where we’ll have some really bigger shows and then there will be a little time off. I think we’ve gotten to really know each other through that process.”