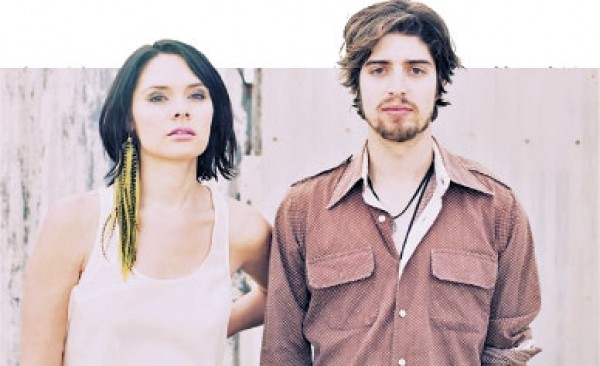 The twosome, Ben Jaffe and Suzanne Santo, have personalities as eclectic as their sound—a mix between bluegrass, alt-country and blues with bold, soulful vocals and hints of rock. Jaffee is a part-time love guru and Santo is a part-time bandit (more on this later). And these quirky traits and proclivities come across in their music.

During our interview, it’s easy to see that this ain’t HoneyHoney’s first rodeo—it’s their second. The band currently has two albums out, First Rodeo, which was self-released in 2008, and Billy Jack, which was released through Lost Highway in 2011. Production of their third album will begin this winter.

What ties these releases together is strong storytelling, which is fundamental to honeyhoney’s musical approach. “Stories are such a great way to create emotion,” Santo says. “I come from a really talkative family, and there’s lot of laughing and fart jokes.” Jaffe laughs and chimes in: “Anyone who is playing music that’s compelling, there’s a storytelling element to it and there’s pacing and drama and something that’s trying to be communicated.”

The theatrics in HoneyHoney’s storytelling come across in their music videos especially, with Santo as the smirking assassin in the “Angel of Death” and an outlaw character in the “Little Toy Gun.” The vocalist and guitar player used to be an actress and has had roles in the TV series Medium and the movie Imaginary Heroes.

“I’m not a bad person, per se, but I do have a little bit of a fascination with danger in a fantasy kind of way. I carry a knife on me and I like to drink!” Santo says. “No, but really I consider myself a pretty sturdy woman and I feel solidified in my words and where I stand as a person. It’s always fun to play with that element of a strong character, which, cinematically speaking, can be something like a bandit or an assassin.” Santo adds that she’s never robbed a bank or killed someone in real life.

Although Santo insists that Jaffe is an actor as well, he denies the claim: “My body is my instrument.” Speaking of instruments, Santo plays the banjo and violin while Jaffe plays the guitar. Although Santo does most of the singing, Jaffe also contributes to the vocals. The band has a rotating cast of other musicians who help fill in on drums and bass.

When not playing music, Jaffe has a side profession as a self-proclaimed “love guru.” He speaks calmly and smoothly about it: “When you’re ravaging the battle-torn streets of your heart, you learn a few things and you want to pass them along to your friends and your family. But I’m not certified in any way, though. I want you to know that. All this talk is making me think this is the path I should take.”

Aside from banditry and love advising, the two are avid pranksters. For instance, one time while their tour manager was sleeping, they decided to throw water on his pants to make it seem as though he’d wet himself. “There was a split second when he looked shocked and thought he might have actually peed himself,” Jaffe says. “Then it turns into realization and then anger and you realize you have it coming to you. It’s a tough game when you live in an elevator-size space with people.”

Santo agrees but says the band should become a united team and start pulling pranks on Duluth, Minn.-based slamgrassers Trampled by Turtles during this tour.

At the end of our interview, the two live up to the sweetness of their band name. Jaffe says that I just made two new friends, and Santo gives me a long-distance high-five.