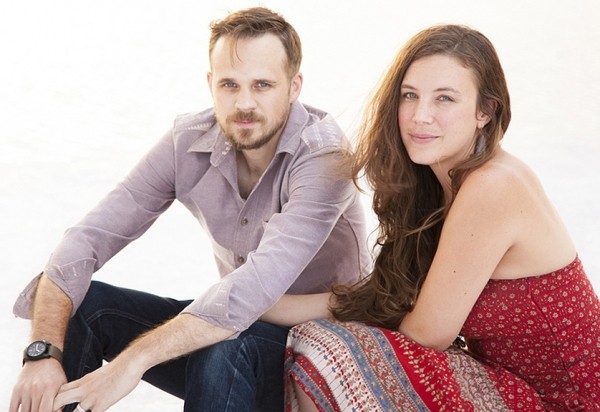 These days, they blend their voices as flawlessly as only two people who share their lives can. But local Americana-folk duo Hope & Tim Glenn didn’t achieve musical (or romantic) harmony overnight.

“It was kind of a long and winding process to actually get together as a couple,” vocalist Hope says. “And then when we were finally together, it took us a year or so to really feel comfortable playing music together. I think it was just kind of working out all the kinks of being a unit and then figuring out how to take our two musical styles and expressions and meld those into one.”

Hope draws a lot of inspiration from old soul and gospel music, and Tim is influenced by Josh Ritter, Neil Young and James Taylor and other singer-songwriters and troubadours. And the stylistic blending that “we just kind of assumed would be automatic,” Hope says, actually took some finessing.

“We both have strengths that play well off of each other, but for some reason when we tried to put them together in the beginning, it was like, ‘This doesn’t work, what’s happening?’ ” says vocalist/guitarist Tim. “So it took a while.”

Eventually, though, they were able to take on the music-making roles that best suited their talents, and found a sound that showcases Hope’s powerful, soulful voice as well as Tim’s lyrics and picking. Tim is the main songwriter, while Hope creates the melodies and is involved in the editing process. “It works really well because I can sort of mold a statue, and then Hope can put in the details and make it a lot better,” Tim says.

But the most magical moments on Hope & Tim Glenn’s latest full-length album, We Are the Choral Copse—released in September 2013—seem to happen when the two musicians don’t try to plan every little detail of a song, and instead set aside expectations and go with the musical flow.

The entire album is stunningly lovely, warm and heartfelt—“Old John” is hauntingly beautiful, almost hymn-like—but the song “A Man of Parts” stands out in particular.

“ ‘A Man of Parts’ was a song we’d had kind of on the burner for a really long time, and we wanted to make something of it,” Hope says. But during the weekend that Hope and Tim traveled to Colorado to record the album, she fell ill. “We just decided, ‘We’re going to get this song done regardless,’ ” she says. “It’s just one take of the two of us singing and a guitar, and we didn’t even have the melody ironed out—it just happened, at midnight. That’s definitely one of my favorite songs on the album.”

Another tune that involved a certain amount of letting go is “Live,” named for Hope and Tim’s baby daughter, Olivia, nicknamed Liv. Tim got the idea for the song after reading Wallace Stegner’s book Beyond the Hundredth Meridian, which is about “how people perceived or expected what the West would be like,” he says. “People were expecting it to be this one thing, expecting it to be full of rain and water like the East Coast, and it wasn’t that at all.”

Reading the book just before Olivia was born made Tim realize “we can expect whatever we want her to be. But she’s going to be what she is.”

The album title We Are the Choral Copse is a nod to the five-piece backing band of the same name that gave the album its rich instrumentation. The name of a chapter in A Sand County Almanac by Aldo Leopold, “the choral copse” refers to a location on Leopold’s farm in Wisconsin, “a group of trees, a copse of trees, that has these birds in it … that sing every morning,” Tim says. “[He] calls it ‘the choral copse,’ and I thought it was a good analogy for what we were doing.”