Choir Boy reflects on wild life on the European road. 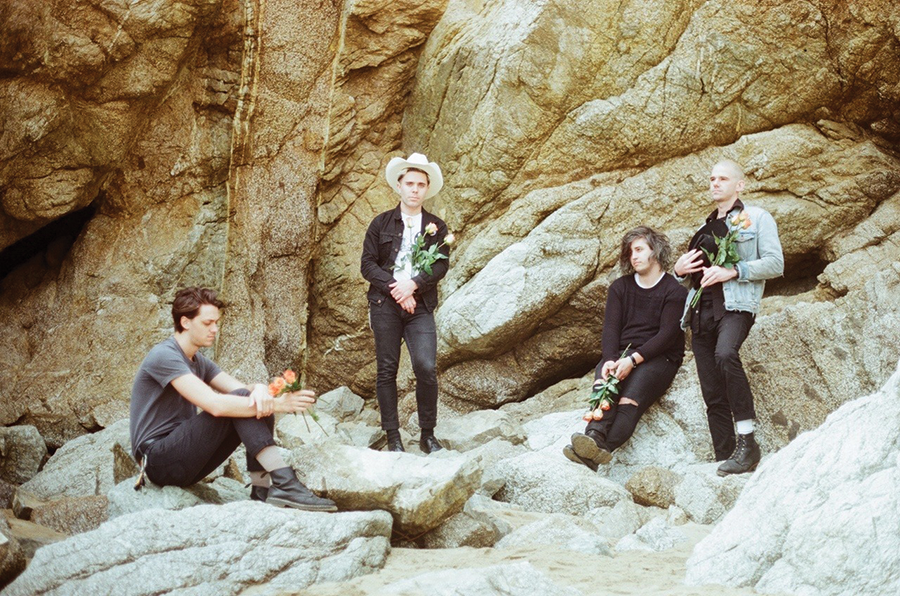 One of the first things Choir Boy members Michael Paulsen and Jeff Kleinman insist that I include in my write-up of their latest activities doesn't have much to do with their activities at all, but instead with their clothes. Certainly, all the members of this local dark-pop band have distinctive styles, but when I meet up with them at their Kilby Court practice space, Paulsen and Kleinman are wearing near-identical outfits and calling each other names. Kleinman wears a pink-washed, formerly white Gildan tee tucked into $10 Rustlers from Walmart. Paulsen sports fresh 501s, into which he's tucked a white Christmas-gifted shirt that after a quick Google search, we find goes for $70 at Nordstrom. They both look like slightly different versions of someone's suave-but-scruffy, cigarette-smoking dad.

When they aren't carefully crafting their outfits—or in frontman Adam Klopp's case, dressing in campy vampire makeup for their music videos—Choir Boy is playing shows, and lots of them. After releasing full-length debut Passive With Desire in 2016, which came together with a slew of Provo and Salt Lake City musicians, the band's lineup solidified to include Paulsen on bass, Kleinman on keyboard and saxophone, and Chaz Costello (of Fossil Arms and the now inactive, but well-loved, Sculpture Club) on guitar and vocals. In 2018, the foursome started spreading their bright goth-pop sounds all over North America and Europe in support of established darkwave band Cold Cave. After this, they bent westward for a winter West Coast tour, where they made an appearance with popular indie act Snail Mail.

Glued as they are to constant touring, they've still had time to work on a few new songs that Klopp says will feel less morose and more self-reflective than those on the last album. It would be a feat to out-introspect an album that already feels so self-aware, but the new tunes won't be released for some time, as Choir Boy set out once again for a North American tour starting in California on Thursday, May 2. This go-round finds them opening for another seasoned act, electro-post-punkers The Faint, whom Kleinman and Costello were each "obsessed" with at points in their younger days.

Their progression to this life of near-constant touring feels natural and earned after Passive With Desire, which features clean production and songs exploring nostalgia and catharsis against a compelling backdrop of dark, uniquely danceable pop. The album has steadily gained popularity all over North America and Europe.

Klopp opens our conversation with the 2018 European tour, and at first, his description is predictable. "Europe was unique because on tours like that, you're playing a lot of venues that feel the same. The U.S. tour with [Cold Cave] kind of felt like Groundhog Day, but in Europe there'd be different products in the gas stations and different languages and different coins to barter with." Paulsen jumps in with a slightly different take, describing the instant fatigue they encountered at the start of the Europe tour. Their first three days were occupied by jumping on and off planes and hauling their gear on confusing, foreign public transit systems—all while jet-lagged and sleep-deprived.

"It was the hardest and easiest tour in different ways. We didn't have to drive ourselves, but we had to put up with our boy," Paulsen recalls, "a real man, our driver, Adrian." It's through this introduction of Adrian—their rockabilly-esque driver who lived each day in a shirt labeled "dirtbag," drank their beer and took them to his Belgian mother's house to eat spaghetti and to meet her donkeys—that a picture of day-to-day life on a breakneck tour in a far-off land emerges.

They regale me with tales: One of a much-needed break they took in Greece during Paulsen's birthday, where a $4, two-gallon jug of white wine made for some interesting times in an escape room; of meeting a spooky fellow with a pale sidekick who, perhaps recognizing Klopp's face from the campy, vampiric cover of Passive With Desire, intimated that he was a direct descendent of "Dracoon" and insisted that his blood donors were "consenting"; and of an open-till-wee-hours rockabilly bar called Teddy Boy in Athens that actually only played New Wave. While telling these stories, Kleinman remarks, "Background: We love horseplay."

But they also tell of playing a sold-out show in a Berlin warehouse, meeting fans who were there specifically to see Choir Boy, and finding and chasing the high of playing their best set. Costello points out the experience of being in so many different foreign spaces was survivable thanks to playing for Cold Cave's built-in audience and the safety of traveling with his three best friends. "You have a task at hand that you have to do, so it's different than traveling," Costello says. "You get to a place and you have no idea how to assimilate into this culture—and you never really do when you're on tour—but at least you get to interact with a large amount of people, and feel like you're a part of it in a way."