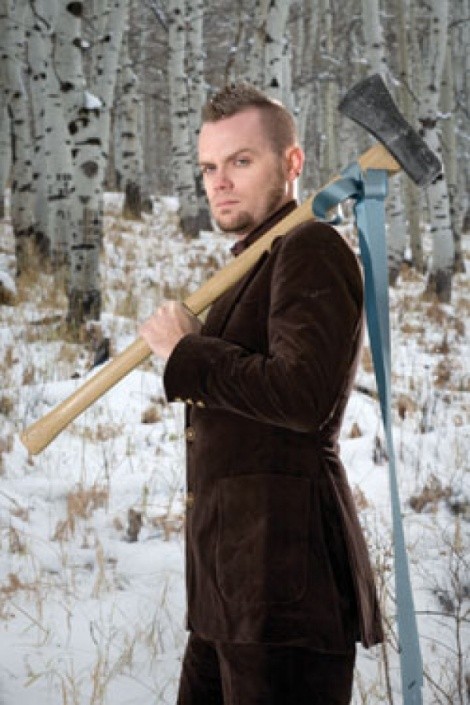 The punch caught Jared Gold on the side of the face, sending his coke-bottle glasses flying. The 20-year-old fell to the ground, almost unconscious, as rednecks kicked him, shouting, “Fag!” “Pussy!” and “Faggot!”

He ended up on his back in the rear of his parents’ motor home. Gold could hear the young women he’d driven with to a Rexburg, Idaho, nightclub that Friday night in 1992 screaming at the thugs to leave him alone. Almost blind without his glasses, Gold rolled over onto his side and fumbled for his father’s chainsaw. The fledgling fashion designer had encrusted it with rhinestones for a photo shoot to promote clothes he had designed for a rave.

Jumping out of the motor home, he chased after his fleeing assailants, while struggling to start the chainsaw. “Talk about justice being served,” he says now of the dramatic turn in events.

The four youths piled into a pickup and pulled rifles from the gun rack. Gold fled back to his camper, flung himself into the back, dropped the chainsaw and climbed over the screaming women into the driver’s seat.

He headed for the freeway, while the pickup came up from behind and swerved at him, trying to force him into oncoming traffic. When he got onto the freeway, the pickup rammed the camper’s back, the cabinetry splintering, as passengers and chainsaw bounced left and right each time the truck slammed into the motor home. Finally, Gold’s pursuers got bored and peeled away.

This wasn’t the first time Gold, who grew up in southern Idaho, suffered at the hands of his neighbors. His final years in Idaho Falls Junior High were plagued with emotional, psychological and physical abuse from, he says, “the popular Mormon kids.” They seemed dead set on driving him to suicide. The only difference between his classmates and the rednecks, Gold argues, was the driver went to jail for attempted manslaughter.

Visit Gold’s Black Chandelier clothing stores in Salt Lake City and Provo, and you’ll find silk-screen printed imagery that suggests a fascination with violence. There are diamond-encrusted knuckle-dusters, sugary cutthroat razors and even images of Victorian chainsaws emblazoned across expensive T-shirts, hoodies and ruffled shirts. But the designs are so whimsical, they seem more objects of barbed parody than distress.

Self-described witch, artist and childhood friend, Los Angeles-based Darcy Megan Stanger, who legally changed her name to Dame Darcy, describes Gold’s aesthetic vision as “hillbilly rococo, gothic dark fantasy, high haute couture.” That doesn’t include influences such as the psychedelic ’60s, Victorian restraint, circus imagery, King Ludwig of Bavaria, children’s puppets and a fascination with all things sweet and decadent. Stir all this together, and you get a hint of Gold’s world.

Gold’s vision is fundamentally a product, he says, of mixing “unlike elements to scare them into something new.” Last year, for his first Salt Lake City fashion show, Gold melded polygamy and witchcraft for his eerily beautiful, if at times abrasive, Quiet Army collection.

But breaking in from the fringes of fashion design hasn’t been easy. He’s battled chronic bad timing and meddling investors. Part of Gold’s dynamic also includes an attraction to situations many others would find intolerable. “It seems like I do really well in scenarios with no resolution, open-ended, semiproblematic, [that] maybe have no end in sight,” he says.

Some of these raw tensions show up in his features. His conservatively styled Mohawk and obelisk-shaped ear studs seem to vibrate with the intensity with which he feels and interacts with the world around him. At the same time, his delicate, high cheekbones and dazzling blue eyes suggest a fiery, childlike innocence. Think Antoine de Saint-Exupery’s Little Prince gone punk.

Such contradictions spill over into his life. Take The Church of Jesus Christ of Latter-day Saints. Gold, who’s gay and in a relationship, says he’s Mormon and ardently follows LDS Church teachings on, for example, not drinking alcohol. But, only 18 months ago, he turned his back on church attendance for good, he says, in part because of its destructive impact on his personal life.

Then there’s Gold’s decision to locate himself in Utah. His avant-garde conceptual design work when he lived in east Los Angeles for 10 years helped pioneer the contemporary Los Angeles fashion scene, says Apparel News’ L.A.-based journalist Alison Neider. While some might scratch their heads at such a creative force moving to a town where avant-garde is, for many, a dirty word, for Neider, his move to the Beehive State makes sense. In Salt Lake City, “he doesn’t have to tailor collections to meet the needs of his retail audience. He’s built his own retail audience.”

Gold came to Utah to make, he says, “beautiful things.” But the takeover in 2006 of Black Chandelier by Nexia Holdings, a Salt Lake City company whose penny shares are traded on the Over-the-Counter Bulletin Board, has left him little time for creativity. Indeed, Nexia’s plan to turn Black Chandelier into a national chain has Gold at full stretch. He oversees merchandising, the four Wasatch Front stores and the Website. And now he’s preparing the dark Nordic lines of his next runway collection, Caspian, which debuts in the Grand Hall at The Gateway on Dec. 7. “I have the burners turned up on me on high all the time,” he says. “I have no room to go any further.”

Investors, he says, like to keep him scared and frantic. That way they get the most out of him for the least money. Several financial backers have sucked the soul out of him, says Los Angeles friend and America’s Next Top Model scriptwriter Clint Catalyst. But then, Gold says, “having money troubles making stuff, that’s all fashion ever is.”

Nexia, however, is a departure for Gold. Owner Richard Surber was also Gold’s first serious lover. Such is their level of trust, it seems, that Gold has no employment contract with Nexia.

“This is a very dangerous game we’re playing,” Gold says about Black Chandelier’s expansion plans—particularly given that, so far this year, the design house has racked up $750,000 in losses, due in part to investment in the stores. Such figures only up the pressure on Gold to produce merchandise for holiday sales that will turn the year around financially. “Got to make sure the goose gets fat,” he says. For a man who says he has a strangulating urge to create, Gold seems to thrive on pressure.

Aspects of his current financial and working situation might sound “bleak and depressing and, believe me, sometimes I’m there,” Gold says. However, he continues, “I get to do marvelous things and that’s really what my life is all about.”