The five most expensive houses in Utah all have one thing in common: dead animals.

Apparently there's an unwritten law among Utah's uber-rich that if you own a house worth zillions, then you absolutely must have the head of a dead animal mounted on one of your walls.

That's what we gleaned from flipping through the online photos of what are currently Utah's five most-expensive properties, according to UtahRealEstate.com. The estates range from a pair of $30-million palaces to a nearly $20-million ranch.

No word if you can buy one using Apple Pay.

Also common is a design aesthetic that can be described as "rustic hipster chic," which is basically wood, wood and more wood.

Here, we break down the Frou-Frou Five. (All listing information taken from Utah Real Estate. Snark provided by the author.)

Fun fact: It features "forged custom ironwork, mostly created on an Amish farm." The beards, the lo-fi aesthetic ... those sneaky Amish are the original hipsters.

How rich is rich?: "Land your helicopter on the helipad," the listing says. Helicopter sold separately.

Décor: It's right on the Weber River, so close you could get wet with a decent runoff. Also a wine room, home theater ... yup, wood everywhere.

Ritzy Zombie Enclave
Price: $30 million
Location: "Southeast of Mount Pleasant in Central Utah." So it's hidden, like the Bat Cave.

What you get: The Bear Mountain Ranch, with six beds, seven baths and 8,424 square feet on 7,973 acres. That's 12 square miles. Perfect for hiding from the zombie apocalypse ... until it's not!

Fun fact: The home is "built with massive logs" that "makes you feel you are in the heart of the Old West." Or on fire. Seriously, one photo of the place is so overlit that it looks like the house is fully engulfed.

How rich is rich?: There are "exceptional trophy elk and deer hunting opportunities," so you can enjoy the lush scenery and be out in nature ... and kill it.

Décor: The kitchen lights are antler-shaped. There are moose antler lights in a bedroom, along with a bearskin rug with its head attached.

Fun fact: It's actually super cheap! "PRICE HAS BEEN SIGNIFICANTLY REDUCED FOR A QUICK SALE!" the listing says, and yeah, in all caps.

How rich is rich?: "Plenty of room to build your own equestrian facility." So, pretty rich.

Décor: Must-have domestic staples your friends already have, like a lazy river, a spa, a sauna, a movie theater, a bowling alley and an indoor basketball court. Of the Frou-Frou Five, this is the most elaborate of the bunch—imagine living in what Rihanna wore to the Met Gala. There are giant chandeliers everywhere, as well as an Egyptian sarcophagus and an armored knight in the main entryway, so the owner is either way into history or way into cosplay.

Animal body count: There's an entire room filled with carnage: a marlin, a school of fish, two moose, at least six deer and one ram.

Fun fact: The estate, called Wolf Creek Ranch, comes with a pond stocked with rainbow trout, so you can go fishing anytime you like. But since they're your fish, you could just skip all that time-consuming nonsense and just mow them down with an AR-15.

How rich is rich?: There's a big movie theater so you can watch NatGeo docs instead of going outside and deal with real nature. Also, there's a barn with a parked snowplow—or is that where the servants sleep?

Décor: Wood everywhere! A woodsplosion! Weirdly, though, we noticed a portable air conditioner in one room, with a hose running out the window. Really? For $20 mil, this shack had better come with central A/C.

Animal body count: One ginormous deer head in a living room. And mounted antlers in the bathroom, which you hope are nailed securely to the wall, because you don't want those falling on you when you're getting out of the shower. 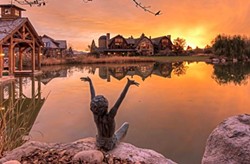 Fun fact: "It began as one family's dream to create a place where memories could be made to last a lifetime," the property's listing reads. Must've been a dream deferred, since the place was only built in 2003 and has been on the market for nearly three years. Also, with a whopping 20 bathrooms, you could shit in a different toilet every day for three weeks (#lifegoals).

How rich is rich?: A boathouse, a motocross course with a maintenance shop, the largest private grove of Sequoia trees in Utah (they've got wood) and a pond with trophy-sized fish to make up for your lack of ... size. Also a "little red schoolhouse," a flashback to a long-ago era before the librul godless commies took over public edumacation.

Décor: Lots of wood and stone, but not terribly ostentatious. It's the million-dollar home for the 99 percent! The main house also has a nickname: The Barn. How cute! How gross!

Animal body count: Surprisingly no animal heads, possibly a nod to the property's more urban locale. There are lovely rooster sculptures adorning the interiors, though.