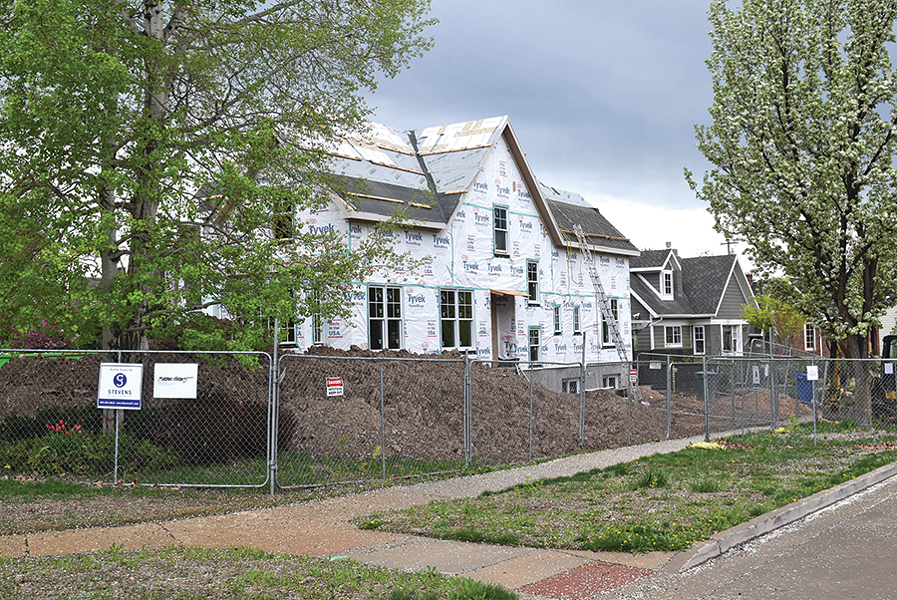 Housing, it's all the rage. As detailed in this week's cover story, from affordability to availability, it's hard to miss a public official bringing up the H word 'round town. Nearly halfway through the city's latest five-year housing plan, some proposals could alter the makeup of some of Salt Lake City's long-established neighborhoods. Each day, the state welcomes new residents and last year, the U.S. Census Bureau even went as far as to say the state ranked No. 1 in its population growth rate this decade. That all, of course, raises the age-old question of where do they all live? Many settle in the capital city, leaving residents who are focused on historic preservation or affordability to worry if enough is being done.

Zoning Barriers
In June, the city's planning commission will evaluate proposed zoning changes to the first of its four multi-family residential housing codes (RMF-30). Dwellings in this zone can include duplexes, apartments, townhomes and multiplexes, to name a few. The idea, says Lauren Parisi, a principal planner with the city, is to incentivize the creation of this "missing middle housing."

"One of the city's goals is to create more housing, but in particular, there are zoning barriers to housing development within our zoning code," Parisi tells City Weekly. "The lot-area standards, the lot-width standards, large setbacks and things of that nature don't really accommodate new multi-family development."

By changing these codes, the department thinks it could allow for more housing units on a property with a smaller footprint and "hopefully decrease their cost," Parisi says, alluding to the vexing affordability crisis.

While the proposal hasn't made it to the city council yet, District 6 Councilman Charlie Luke says people should view it as a part of a bigger picture.

"Is it going to fix all of the affordable housing pieces?" Luke asks. "No, but it's a piece of that and how we can look at increasing density and looking at affordability tools."

While single-family homeowners might not like to hear it, one problem lies with those types of units. It's why the city is proposing incentives to add more units to those parcels as well as a historical preservation-motivated bonus that would allow the owner to keep an existing structure if they built another unit on the property. But that might not help much if other city development issues aren't addressed as well, Luke says.

Preservation Problems
When it comes to the RMF-30 zoning, which mostly includes properties on the eastside and some in Luke's district, about one-third of the properties fall in a Local Historic District, a distinction Lynn Pershing, education director for local preservation group Keep Yalecrest knows too well.

Throughout the area, the scene of homeowners tearing down a one-story bungalow and replacing it with a larger two-story structure is nothing new. Pershing has been tracking those numbers and worries that with a lack of protections in some of the neighborhoods and ideas circulating to revamp zoning codes, "neighborhood cohesion" could be threatened.

"One of the big issues with planning and neighborhood design is you don't destroy neighborhood identity," Pershing says, pointing to a diagram of various multi-family housing types. "If you put one of these in the middle of a block of single-family housing, that destroys the cohesion of a neighborhood because people in these multi-families, they don't often integrate into the community—they're not real neighbors."

Keep Yalecrest makes a distinction between demolitions and tear-downs—a demo includes the house above ground and its basement; a tear-down is just the part of the home above the earth—while the city's website includes all of them under a "demolition" umbrella. As part of her involvement in Keep Yalecrest, Pershing has tracked demolition numbers from the city. She found that in the 84108 zip code—which runs from Emigration Canyon south to 2100 South and from 1700 East to the foothills—there were 81 demolitions from 2008-2018. Sixty of those instances came in the past five years.

Meanwhile, in the 84102 zip code, which stretches from South Temple to 900 South and 500 East to 1400 East, 37 demolitions took place since 2008, 29 of which occurred in the past five years. In Pershing's opinion, what's being built in their place, is not something that increases the city's housing stock.

"What's interesting is they're tearing down contributing historic homes, but they're not replacing them with multi-family housing, they're replacing them with three to four times sized homes," she says. "And they're all $1-plus million—most of them are $1.2 to $2 million."

In an effort to slow the trend, the preservation advocate has already tried to get the area around her home designated as a Local Historic District, but wasn't able to collect enough supporting votes. Residents like Pershing can create their own Local Historic District, but must get a certain number of neighborhood buy-in first through signatures and votes of approval from property owners.

That recently became harder to do, though. Stop us if you've heard this before: After the city established a new process to make Local Historic Districts more available in 2012, the Legislature jumped in with House Bill 223 in 2016. The bill usurped the city's code and required that 33% of property owners in a designated area have to sign a petition. Additionally, two-thirds of the returned ballots have to vote "yes" for the historic district designation and the yes votes have to represent more than half of property owners. The city's ordinance required just 15% of property owners agree and only needed a simple majority of the voters participating to vote in favor.

Luke says that whether it comes to affordable housing, historic preservation, new zoning, or lately, the inland port, the city and the council are "constantly walking a fine line between what's in the best interest of Salt Lake City and what the political reality is."

"The state Legislature has a super-majority of Republican control and Salt Lake City is a progressive city," Luke says. "We need to figure out how to work with the Legislature. Simply suing isn't a solution ... I wish the Legislature would leave us alone, but they don't, and you see it with the historic districts."