How 9 Utahns Survived Being Shot

by Austen Diamond and Carolyn Campbell 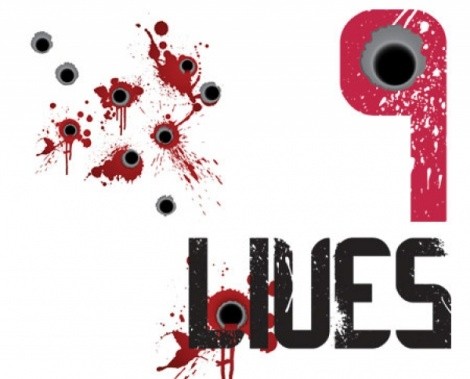 Not every bullet kills. But upon entering the body at a velocity close to the speed of sound, bullets can really mess you up.

The nine Utahns we talked to learned this firsthand. Several truly cheated death; others still suffer pain or have lost use of vital body parts. Most struggle with anguish but seem to have come away with a renewed sense of purpose. If you have survived being shot, comment below to leave your own accounts, see video interviews with victims, and find organizations dedicated to helping shooting victims.

An Eye for an Eye: LeRoy Heaton
LeRoy Heaton, 84, doesn’t like people sitting on his left side; he gets anxious when he can’t see them. He shares that with his deceased father—both lost their left eyes at a young age. On December 24, 1939, at 14 years old, he found an old .22 rifle in the attic of his family home in Kanab. Heaton was enamored with it, so he cleaned and oiled the firearm, but his older brother, knowing the danger of old guns, tested it by firing three rounds behind a tree for protection before letting Heaton use it. Taking the gun inside to fetch more bullets, Heaton loaded it in the kitchen; as he closed the gun, the bullet exploded before it was locked.

He felt the powder burn his face but was initially unaware of his eye. “I had my hand over it, and I was watching my mother when I moved my hand. Immediately, I knew something was terribly wrong because of her expression,” Heaton says. A piece of shell hit his pupil dead-on. A doctor removed it and sent him home, eye-patched, for Christmas. “Back then, you couldn’t remove a body part without the sanction of two doctors, so we went to Cedar City, where the eye was taken out,” Heaton says. Soon afterward, he bought a glass eye in Salt Lake City, then priced at $5. “I tended to blame my Heavenly Father for not protecting me. I’d ask, ‘Why did you let me lose my eye?’” But, while serving his mission for the Church of Jesus Christ of Latter-day Saints on the East Coast, he met a woman whose husband had lost his eye, prompting the couple to join the LDS Church. “I figured that’s why I lost my eye, too: to be more devout,” says Heaton, who’s had more good come from the injury than bad. Although his childhood passion was sports, without both eyes, he had no depth perception, so he focused on music. Missing an eye enabled him to receive a college scholarship—he wouldn’t have attended otherwise—and he received a music composition degree, allowing him to pursue a music-teaching career. Heaton often makes light of his situation, and his 66 great-grandchildren enjoy his humor of taking out his fake eye and “looking at himself” or peering around corners. And that incident hasn’t deterred his gun use. “I was out there the very next season, hunting rabbits,” says Heaton, who’s hunted deer most seasons since. “I tell people I’m such a good shot because I can shoot with both eyes open,” he says, laughing. (Austen Diamond)

“Don’t Say a Word”: LaDawn Prue
As 18-year-old LaDawn Prue returned home after work at a Marie Callender’s restaurant on Christmas Eve, 1982, a masked Kenneth Roberts stepped from behind a tree, holding a gun. Placing it against Prue’s head, he said, “Don’t say a word, or I’ll kill you.” Prue says she received “a pure sense of clarity. There was no fear, no trembling.” 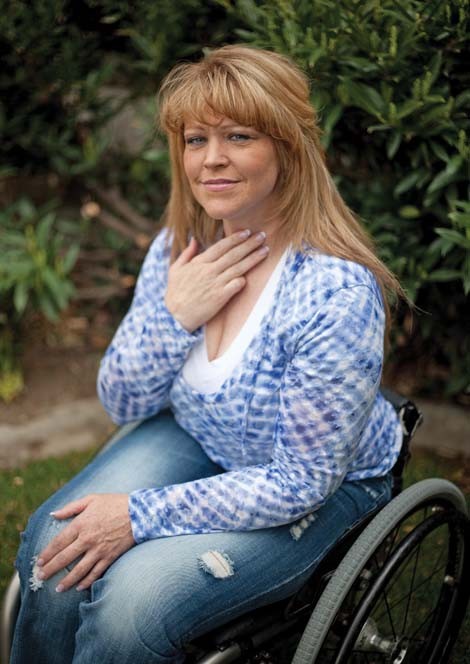 As Roberts led her toward his car, she dumped the contents of her purse on her lawn, then dropped the purse, hoping someone would find it. Roberts put Prue in the passenger seat, closed the door, turned, and shot her in the neck through the car window. Prue’s plan to go with him until she could break away when he became distracted while driving instantly changed. “When he shot me, he was obviously not going to give me a chance to get away.” Holding her bleeding neck, she opened the car door and took one step out before Roberts shot her again, in the lower back. He drove off, leaving Prue lying in the street, yelling for help. Minutes later, a neighbor found her and called 911. She was airlifted to University Hospital for surgeries and rehabilitation that included getting used to a wheelchair. Prue was left a paraplegic. Today, she has sensation only down to the top of her legs.

She warns that her feelings about why she was spared sound churchy: “I was always taught that God knew me as an individual. That night, for the first time, I knew it was true. He was with me, and I felt like I was let in on the decision whether to take me home or leave me here. There were obviously things this challenge was supposed to teach me.”

She’s been Miss Wheelchair Utah, a crime victim’s reparation lobbyist, an inspirational speaker and a cruise tour guide. She currently owns an import retail business, Moose B Haven, and sees her future dream job as consulting for handicapped accessibility. Snowmobiling, jet skiing and four wheeling are partly her zest for life and partly “just me rebelling against being the stereotypical crippled girl.” People tell her, “You’re too pretty to be in that wheelchair.” When asked what life would be like without the attack, Prue says, “For all I know, I could be homeless, living in a cardboard box. Life could be so much worse.” (Carolyn Campbell)

Update: Where are all the shooters now?

A Splinter in Your Eye: Dave Acosta
Officer Dave Acosta was a fairly new SWAT officer when he left Provo to take a job with the Las Vegas Police Department. On an eventful day in 1994, he squared off twice with a suicidal, meth-induced suspect: once while the suspect was walking around with a shotgun in North Las Vegas, and again later that night outside the hospital where they had both been admitted. 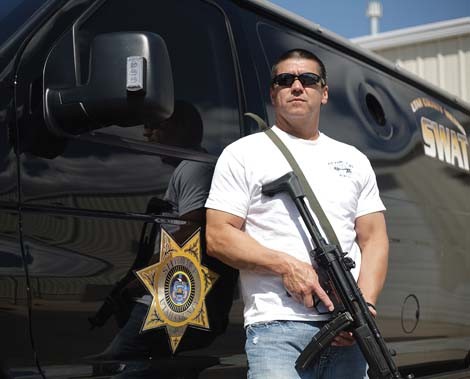 That afternoon, Acosta was part of an immediateaction team to respond to the suspect after planned bean-bag rounds knocked him out. The suspect stood up suddenly, so two officers fired; he was hit in the belt and jacket, undeterred and completely mobile with the shotgun. “The sergeant asked me to run and apprehend him after he was shot,” says Acosta, who did and was within 10 feet of the suspect when Acosta was shot by lead pellets from a misfired and spliced bean bag. Acosta thought the suspect had shot him and was prepared to use deadly force when the suspect was knocked unconscious by several more rounds. After the diffusion, Acosta tried to seek medical help. “No one believed me; the paramedics said it was a splinter in my eye. I couldn’t convince anyone. I had three [pellets] in my helmet, some in the Kevlar vest and one through my eye,” Acosta says.

The pellet pierced his left eyeball, left of the retina, but because of the angle, had just punctured and deflated his eye, causing swelling. Doctors told Acosta it was a one in a million chance of not losing his eye or being potentially fatal. As Acosta sat in the hospital, retelling the story to his best friend at 2 a.m., he saw the suspect walk past his room and down the hall. “He was still on meth and was swiping at people with a scalpel he’d stolen. Then [the suspect] ran outside.” So, Acosta ran after him, barely clothed and eye pulsating, and caught up to him outside and squared off, 20 feet away. The suspect began approaching Acosta, who pulled the hammer of his gun, which stopped the suspect. As backup rushed forward, the suspect got on the ground and threw his scalpel to the side.

Now, Acosta teaches officer training with the mentality “Always Win”—as was the case that evening. His eye has mostly recovered. (AD)