How to Train Your Dragon 2

Dragon 2 shows DreamWorks is still willing to be daring 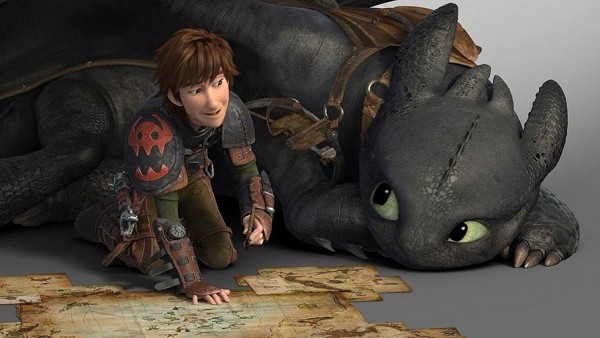 At the opening of How to Train Your Dragon 2, the familiar logo appears—a boy casting a fishing line from his seat on a crescent moon—accompanied by a message that just doesn’t seem like it could be right. “20 years”? Could it really be that long that DreamWorks Animation has been doing … what it does?

On the one hand, the celebratory tag feels wrong because, while DreamWorks as a studio was organized in 1994, the first DreamWorks Animation feature—Antz—wasn’t released until 1998. But it also feels wrong because it has started to seem like the jokey, smirky, frantic style that we associate with DreamWorks has always been with us. Though the studio may have started with more epic ambitions in The Prince of Egypt and Spirit: Stallion of the Cimarron, it became the home of stuff like Shrek and Shark Tale and Madagascar. And the success of those movies gave rise to Blue Sky’s Ice Age and Illumination Entertainment’s Despicable Me and a generation of animation seemingly built to be everything Pixar, at least initially, was not: fast, colorful, full of punch lines and pleasantly, easily franchisable.

The original 2010 How to Train Your Dragon had a slightly different vibe, both from its impressive use of swooping 3-D visuals and its slower, more contemplative moments turning the relationship between wimpy viking Hiccup (Jay Baruchel) and injured dragon Toothless into something out of The Black Stallion. Yet it was also fundamentally a story that has grown tediously familiar in feature animation: the bumbling outcast who wants to fit in but has to learn that what the world really needs is for him to Be Himself.

This sequel heads in a more interesting direction, picking up five years later with the seaside viking village of Berk now firmly settled into a new normal of dragons as their trusted companions, to the extent that they’ve developed some dragon-flying variation of Quidditch. But even as Hiccup uncomfortably deals with the news that his father and village chief Stoick (Gerard Butler) expects him to follow in his leadership footsteps, a new threat emerges: a warlord named Drago (Djimon Hounsou), who plans to subjugate all people by taking control of all dragons.

Hiccup’s world is also thrown into turmoil when he discovers that his mother, Valka (Cate Blanchett)—whom he’s always believed to be dead—is in fact still alive, and living as a sort of hermit activist protecting dragons. There’s a weird similarity between Valka’s story and that of Homer’s mother in The Simpsons, but director Dean DeBlois—flying solo this time after working on the first Dragon with Chris Sanders—finds some surprisingly emotional material in this family reunion, including a wonderful scene between Valka and Stoick.

That sensibility carries throughout Dragon 2, with a willingness to pause and be more quietly playful in the middle of all the grandiose—though still visually striking—dragon battling. DeBlois has fun with giving the dragons characteristics of overgrown, fire-breathing domesticated pets: chasing around an ember like a cat with a laser-pointer, or innocently fetching an object hurled away. And it’s a wonderfully silly sustained gag when tomboyish young viking Ruffnut (Kristen Wiig) starts crushing hard on a hunky bad-boy dragon trapper (Game of Thrones’ Kit Harrington).

But perhaps the most satisfying side of Dragon 2 is that it feels like it’s about something kind of daring for an animated feature: the idea that there are different ways to be a leader. The clash between Hiccup and Drago becomes a clash between how one responds to being damaged, and whether the exercise of power is predicated on fear or respect. This is “teachable moment” cinema for young viewers that doesn’t push too hard on how teachable its moments are. And it matters that in this world, some choices—even heroic ones—have permanent, not always happy consequences.

Perhaps there’s no way to avoid some of the formulaic need for huge set pieces in these family blockbusters, and it’s a bit disappointing that a strong character like Astrid (America Ferrera) becomes kind of an afterthought here. Yet it’s always going to be a pleasant surprise when an institution like DreamWorks Animation decides that even after 20 years, playing it safe isn’t the only option, and that there’s still room to grow.

HOW TO TRAIN YOUR DRAGON 2