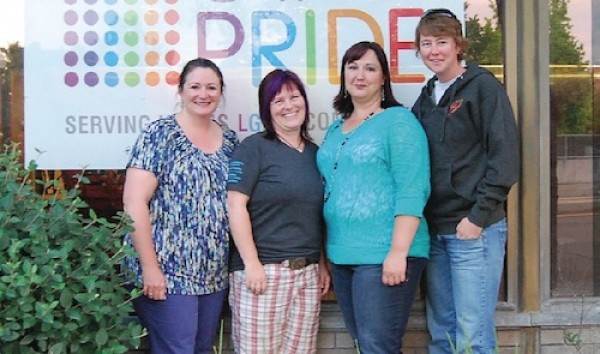 This year’s Utah Pride Festival is expected to draw up to 35,000 people, with more attendees, vendors, supporters, parade participants, and volunteers than ever before—and in this climate of hopeful anticipation for a ruling from the 10th Circuit Court of Appeals upholding Judge Shelby’s decision, it’s set to be one of the biggest, most joyous gatherings. Despite some abrupt shifts and changes at Utah Pride Center just as festival-planning season peaked, the Steering Committee leaders at the forefront have pulled together and picked up the pieces with renewed dedication and camaraderie. “The leadership is good,” says Parade Director Bonnie O’Brien. “You can put a new leader in there and the train is already driving down the tracks.”

The team of passionate staff and volunteers who make up the Steering Committee work tirelessly year after year to make the festival a success. Michelle Stephen, director of logistics, says, “it takes a special person” to keep coming back each year. Most of the Steering Committee has been there seven or eight years. “It’s really inspiring and humbling to be a part of it.”

Jen Parsons-Soran, sponsorship chair for the past seven years, says it’s nice working with a group of people who know what they’re doing. “We have a very veteran group, and it’s great to see the time and energy they give to this festival. They have a real love for it.”

Stephen has watched the festival grow and change in the 11 years she’s been involved. The changes she is most excited about this year are the increased number of vendors (as many as 80 more than last year), a focus on local food, a bigger art zone, and newly added street performers. “It used to be just a party in the park. Now it’s a diversified party in the park, with family-friendly hours and more representation of what our community truly is.”

The director of logistics oversees everything on the festival grounds: maps, layout, compliance, safety and security, emergency response, timing and deliveries, tents, tables and chairs. It’s a huge undertaking, but Stephen says this is her way of giving back to the community. “I wasn’t one of those queer people that had to fight the fight. I have a lot of friends and know a lot of people who had to fight the fight—whether it was being beat up in high school, having to deal with losing their family, or losing their children. I didn’t have to sacrifice.”

The event’s director of volunteers, Katina Tuero, is looking forward to bringing her 16-year-old daughter with her to volunteer at the festival for the first time, and marvels at how much better things have become. “It’s so neat,” she says. “The next generation has a whole different viewpoint than even my generation did.” Growing up with a lesbian aunt made it confusing for Tuero to hear kids at her school saying negative things about gay people. But now she has a lot of friends who are bringing their own kids to the festival.

“When we were growing up,” she says, “it wasn’t as accepted, so it’s very different for them to see their kids excited to go. It’s great to see viewpoints and attitudes changing.”

More straight allies have started volunteering, especially in the last couple years, according to Tuero, who has volunteered for the past seven years. She says people see this as something they need to support for their LGBTQ friends or family. More than 600 volunteers have already signed up, and 150 more are needed. One three-hour shift gets volunteers free festival entrance for the day, plus a T-shirt. Tuero says the many hours of work involved organizing the hundreds of volunteers all starts to pay off when she sees the fences and tents go up, and all the people come pouring in. “Every year I see the parade it makes me cry,” she says. “It’s beautiful to see the love.”

Some have said that the Utah Pride Parade has become the biggest parade in Utah. Though O’Brien, who has been parade director for two years now, says she has “no proof” of it being the largest parade, it’s certainly bigger than ever before, with as many as 130 entries and 7,000 participants.

Two dozen more requests came in that had to be denied because it got too full, according to O’Brien, who covers all off-grounds festival events: parades, marches, rallies, and the 5K fun run. She says there will be booths selling beverages and swag along the parade route this year to raise scholarship money for Utah Pride Center Youth. The funds will send kids to Camp Any Town, a program run by the Inclusion Center, whose mission is to teach understanding and acceptance of all people regardless of ethnicity, religion or sexual orientation.

“I’ve been a ninth grade teacher at a junior high for six years,” explains O’Brien, “and I’ve watched kids struggle with their sexuality, and the religious or political dogma that they’re brought up in. I’m out and proud. I’m good, and my family is OK, and now my whole goal is helping other people to get there.”

Parsons-Soran—who covers all sponsorships, community relations, awards, as well as the Grand Marshal event and VIP tent—sees the festival as a celebration of people being able to come and be themselves. “You get to come and enjoy yourself and be yourself, and you are accepted and loved for that.” She says she was called to the work seven years ago for her expertise, but her love for it is personal. “Although I am straight, I have many, many members of my family and friends who are LGBT,” she says, “and as members of the ‘majority,’ we have a responsibility to stand up for our LGBT brothers and sisters. And we have a different voice in this fight. I have these people in my life that have the most amazing relationships and they don’t have the same rights as I do, and I don’t think that’s right.”

The Utah Pride Festival has come a long way from that first small park gathering of gay and lesbian folks in 1974 to the celebration of diversity it is today. It’s a community-building event that attracts not only LGBTQ people looking for a safe space to feel accepted and loved for who they are, but also the friends and families who support them.

Parsons-Soran says she appreciates being welcomed into this community: “I know that sometimes there’s a concern and a challenge about straight people being involved, but the fact of the matter is, this is my community,” she says. “This is where my friends are, this is where I feel the most welcome, and the ability to be myself. And I thank everybody for that.”

“It also gives us an opportunity to highlight who we are at Utah Pride Center,” she continues. “In many ways, it’s our gala. We throw the biggest party in town. It’s very hard for the Utah Pride Center to be everything to everyone, and this is one way we can be, at least once a year.”