After a year away from music, indie-rock maestro Rob Crow returns to his Gloomy Place. 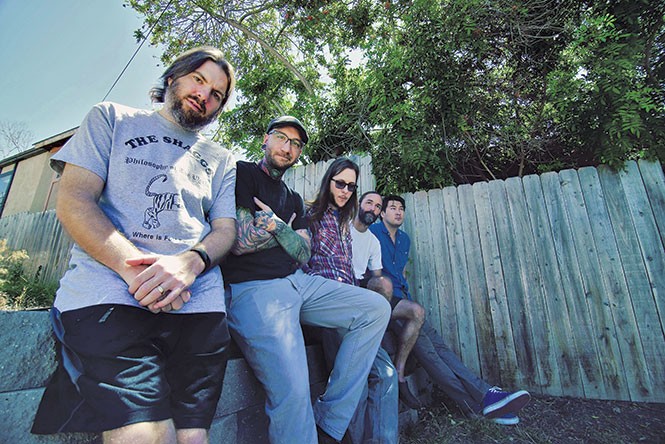 Spanning 20 years, Rob Crow's complete list of projects is literally too expansive for the space allotted here. Even the broad strokes form a long list, representing a microcosm of indie rock as a whole: the canonical, at times almost flawless, indie pop-rock songwriting with Pinback, the Krautrock-influenced Physics, the progressive indie unit Heavy Vegetable, retro pop-rock project Optiganally Yours, acoustic trio Thingy, doom-metal combo Goblin Cock and Crow's introspective solo albums. All of it is peppered with math-rock polyrhythms, and their respective styles sometimes spill over from one project to another. Crow is the very personification of eclecticism.

So when Crow announced last March that he was quitting music, it was almost taken as emblematic of indie rock itself, in all its various incarnations and varieties, having reached some kind of terminal point. When such a prolific songwriter, fluent in so many musical subgenres, announced the end of his career, it inspired one at least to pause and consider whether "indie rock" (we can debate the exact definition, even the actual existence of the genre, at another time) had exhausted its ability to express anything authentic or genuine.

But, in November, Crow revealed that he was coming back to the fold, and working on a new project. This month, Rob Crow's Gloomy Place releases the album You're Doomed. Be Nice on Temporary Residence. Having felt the need for an explanation when he stopped, he, at the time, wrote several notes on Facebook, saying, among other things, "I have come to the realization that making music in this climate is financially irresponsible to my family and ultimately humiliating to my psyche."

Now that he's returned—and the new album gives plenty of evidence of his renewed vigor—Crow says he learned something during the hiatus. "While trying to do what I thought was best for my family, I realized my family didn't want me to quit, but wanted me to keep going." Having lost weight and stopped drinking, he has found a way to make music again while avoiding "certain situations" that weren't healthy. His wife's new job enables him to focus on music again.

Crow looks back on his earlier work with pride, if perhaps tempered with a little embarrassment, but that's what happens sometimes when you are a musical risk-taker. "One thing different from when I started is, I've definitely veered away from anything cute, or any kind of happy horseshit," he maintains. Like his music, talking to him is replete with a sometimes dark, if disarming and apparently effortless, sense of humor he displays at times.

Crow's favorite works from his oeuvre aren't the most well-known. He says The Other Men album Wake Up Swimming (Robcore, 2007) is "the best record I ever made, but most people don't know about it." It sounds kind of like if Phish played math rock—and that's a compliment.

When Crow quit, he said, "I'm gonna finish up and release all my current records," and he touts a bunch of these unreleased gems, including an Optiganally Yours set, one by Thingy, and two by Goblin Cock: "One's a regular album, and one's the Cock Opera!" Also, he says, "Alpha Males is a really fun power-violence band I was in for a while." He doesn't have plans to release any of these right now, lacking funds and proclaiming, "If there's one thing I hate, it's hustling my own shit. I hate talking about myself more than anything."

Always eccentric, Crow describes You're Doomed as "a solo album with friends." He recorded it by himself, then taught the songs to his cohorts, and re-recorded them in a studio with an engineer. "It sounds more like the band does live than any of my solo albums would." A song like "Business Interruptus" (which might be taken as about his hiatus), is peppy without being artless—a rare combination in today's music world. Also, the album title makes you do a double-take, but it's a wit common in all his work. Rob Crow is back, with a release that is strong, and doesn't dilute his creative energy by going off in all different directions.

Crow is also representative of indie rock because, like many listeners, at some point between the emergence of indie in the '90s and now, had married and become a parent, and faced the challenges of trying not to let an important part of his life fall by the wayside. "I was always interested in the autonomy of art—how fast, when inspired, I could finish something before the inspiration left the idea," he says. "Now that I'm forced to act that way, I'm glad I have the experience."