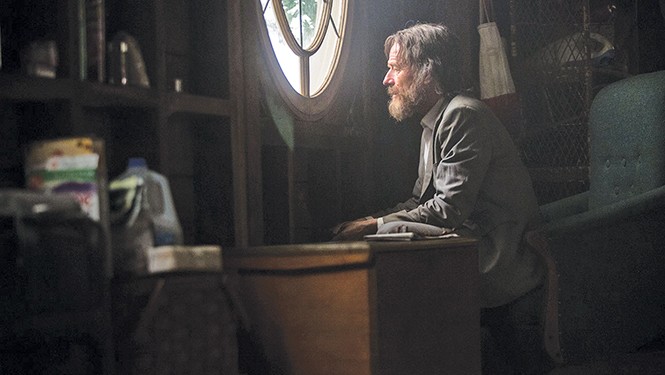 As the 21st century marches toward being old enough to vote, and the novelty of Method acting recedes farther into our collective cultural rearview mirror, perhaps we should re-think our approach to "big" acting. It's time for a ham-aissance.

When it comes to out-sized cinematic thespians—as is true of all aesthetic matters, of course—ham is in the eye of the beholder. The scope of such a discussion could run from vintage Nicolas Cage to late-period Pacino, with any number of possible shades in between. But the important thing is that restraint isn't always the best fit for a character. Sometimes, a performance is about a character's own performance. Sometimes, bigger is better.

Not everyone would characterize Bryan Cranston as hammy actor, however many hints of salty smokiness might be sprinkled throughout his résumé. But what he has done remarkably well in some of his most celebrated performances—as Walter White in Breaking Bad, or his Oscar-nominated title role in Trumbo—is play men whose defining quality is a kind of public role-playing. That's why Wakefield might just be the perfect part for him.

Based on a 2008 E. L. Doctorow short story, it casts Cranston as a New York attorney named Howard Wakefield who arrives home after work one day to find a raccoon scurrying into the attic above the detached garage. Once up there, Howard peers through the window at his wife, Diana (Jennifer Garner) and twin teenage daughters, and ... he stays. He doesn't answer his cell phone when Diana calls to find out why he's late. He doesn't emerge the next morning, either to reunite with his family or to go to work. "Who hasn't had the impulse just to put their life on hold for a moment?" Howard ponders, and so he does—turning into a kind of raccoon himself, living unseen on his own property, scavenging for food and observing through the windows as this family deals with his unexplained disappearance.

Writer/director Robin Swicord—a veteran of literary cinematic adaptations like Little Women and The Curious Case of Benjamin Button—sets the tone with the jittery violins and tinkling piano of Aaron Zigman's score suggesting an urbane mystery, and frames the story through Howard's first-person narration. It's an effective device for shifting our sympathies about him, first as he describes his strained relationship with Diana, and later as he reveals the circumstances though which he deceptively stole her away from his best friend (Jason O'Mara). Wakefield is less a story about a man who abandons his previous life than a story about a man who tries to comprehend a life from which he's already become detached. What can you learn about your own existence when you get the chance to view it as a spectator?

That narrative rests almost entirely on Cranston's performance, and here is where his particular gifts as an actor make it all work. There's a smug quality to the earliest scenes of Howard's observations from the attic, as he provides mocking narration for the scenes he watches play out below—a gathering of sympathetic friends, or a visit by Diana's mother (Beverly D'Angelo). His reaction involves a unique form of possessiveness—he doesn't have to deal with Diana, but he can keep tabs on her behavior in his absence—and Cranston plays that alpha-male-ness with just the right touch of acidity.

After a few months, however, Howard essentially becomes feral, and here Cranston's task gets even harder. Swicord makes some odd choices, including a chase sequence as he fights with Russian gleaners over items found in neighborhood garbage cans, and it would be easy for the bushy-bearded version of Howard to come off like a literary contrivance that just doesn't translate to the screen. Yet there's an element of Cranston's performance that clings to Howard's prior life; he's not some homeless man in the same way others are homeless, because he still believes he can go back whenever he wants. It's a role Howard can play for the purposes of an experiment—testing Diana, testing himself.

Swicord builds to an appropriate enigmatic conclusion that's less about how Howard will resolve his situation than about his winding journey as a tourist in off-the-grid existence. Wakefield's effectiveness depends on an actor who can find a kind of arrogance in having next to nothing. I'll take that with a side of ham.