I Spit on Your Grave, Life as We Know It, Middle Men, Paranormal Activity 2, The Romantics

I Spit on Your Grave
Remake of the 1978 revenge classic; this time rape-ier, more sadistic and filmed on a budget higher than $100 (like, maybe $250): A woman brutally attacked by rednecks carries out vengeance that makes Saw look like Shrek. (Anchor Bay)

Paranormal Activity 2
Once again, a dumb couple moves into a demon-possessed house—they forgot the sage, but at least they brought a video camera. Then there’s some nonsense about sacrificing a first-born son, demon-on-dog violence, etc. (Paramount) 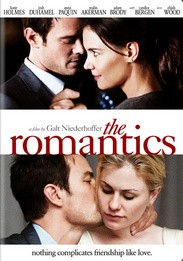 The Romantics
The story of the Detroit new-wave band that discovered red pleather and climbed the charts with the hits “What I Like About You” and … huh? It’s another Josh Duhamel movie? With Katie Holmes? And Anna Paquin? Blech. (Paramount)