12 shows to catch up on in December 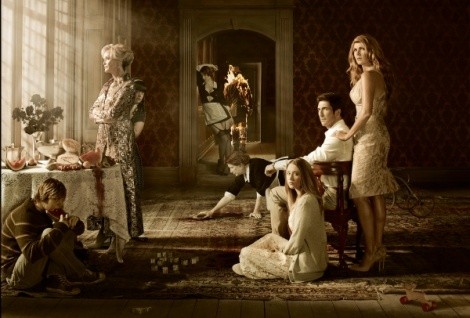 Nine episodes in, Revenge has evolved from what initially looked like a weak Hamptons mashup of The Count of Monte Cristo, Gossip Girl and a Neiman Marcus catalog into a surprisingly smart (but still juicy) settle-the-score soap opera. Madeleine Stowe—where’s she been?—chews scenery like classic Joan Collins.

Up All Night
(NBC, 2011; iTunes)
Babies usually ruin everything, but li’l Amy has been no match for the comic triple threat of Will Arnett, Christina Applegate and Maya Rudolph, who consistently manage to keep Up All Night from leaning Too Sweet or Too Weird. It’s NBC’s best new comedy since Parks & Recreation (sorry, Whitney).

Breaking In
(Fox, 2011; iTunes)
Fox bought this Christian Slater security-firm comedy in 2009, dumped it, then brought it back and jerked around on its schedule back in the spring of this year, canceled it, then un-canceled it and ordered a second season for 2012. Breaking In’s seven available episodes prove Slater’s been wasting his time on dramas.

Warren the Ape
(MTV, 2010; iTunes)
Possibly the most twisted-and-wrong series MTV series ever(!), Warren the Ape ruined television for puppets—or it would have, if anyone had seen it. “Fabricated-American” actor/addict Warren DeMontague met with Dr. Drew at the beginning of every episode, but then proceeded to drink, drug and whore his way through Hollywood with hysterical abandon—all pre-Charlie Sheen meltdown.

Death Valley
(MTV, 2011; iTunes)
This year’s Warren the Ape, a fairly clever and well-produced scripted comedy that somehow found a slot on MTV. Death Valley isn’t as comically nimble as Reno 911!, but it does boast more zombie kills than The Walking Dead and Tania Raymonde (Lost) undercover, spectacularly, as a vampire hooker.

Boss
(Starz, 2011; first episode free at Starz.com)
Kelsey Grammer’s tough Chicago-politics drama isn’t taking December off, but chances are you haven’t seen it yet: Boss’ ratings aren’t just Starz low, they’re C-SPAN low. The series has been summed up critically as everything from “Breaking Bad meets Bonfire of the Vanities” to “all five seasons of The Wire at once,” and they all kinda fit.

Party Down
(Starz, 2009-10; iTunes, Netflix streaming/DVD)
Before Jane Lynch broke out (but is now trapped) in Glee, she was just as hammy in Season 1 of Starz’s beloved/canceled Party Down, about Z-list Hollywood actors working for a D-list catering company. She was gone by Season 2, but the funny wasn’t.

Portlandia
(IFC, 2010; iTunes, DVD out Dec. 6)
Portlandia’s sketches have been disseminated individually all over the Internet, but the hipster-tweaking comedy of Fred Armisen (Saturday Night Live) and Carrie Brownstein (Sleater-Kinney—who knew anyone in that band had a sense of humor?) is even better within the context of its six near-perfect episodes. The best: Kyle MacLachlan as The Mayor of Portland.

The Increasingly Poor Decisions of Todd Margaret
(IFC, 2010; iTunes)
Part of an ensemble, David Cross (Arrested Development, Mr. Show) always delivers; solo, he ain’t for everyone. Which made his likeable lead turn as Todd Margaret, a hapless American sent overseas to sell a toxic energy drink (“Thunder Muscle: Like drinking 10 lightnings!”) to the British all the more surprising.

Sons of Anarchy
(FX, 2011; iTunes)
The SOA Season 4 finale is Tuesday, Dec. 6—if you haven’t been watching (on FX or, ahem, with True TV at Brewvies), this has been the most intense, game-changing run of the biker drama yet. Just ask showrunner Kurt Sutter.

Terriers
(FX, 2010; iTunes, Netflix streaming)
The most bittersweet cable cancellation in recent memory, Terriers starred Donal Logue and Michael Raymond-James as low-rent San Diego private investigators who stumbled upon a local governmental conspiracy, and it had action, wit, mystery, heart—everything but viewers. Oh, and a title that made any damned sense.