If They Brew It, You Will Come 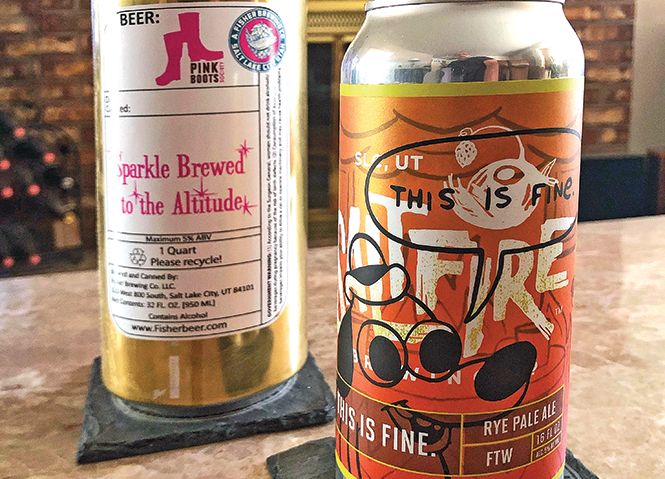 I don't know about you guys, but quarantine is going great! I've gained 30 pounds, and my Judge Judy Blu-ray anthology just arrived. If it wasn't for this week's Pink Boots beers, I'd still be playing Twister by myself. The Pink Boots Society is an organization that supports women in the brewing industry worldwide. These beers were designed by the women working in the breweries from which they came, and a portion of the profits go to the Pink Boots Society. So, drink up, buttercup.

Saltfire This is Fine: Pours a burnt orange and amber color with a thin layer of head sitting on top. The nose is surprisingly spicy, I'd have to assume from the rye malt. Underneath the intoxicating rye rests cereal grains, and some herbal and citrus hops, though faint.

Spice from the rye malt and slightly sweet pale malt shines through in the mouth. Some herbal hops—including a grassy flavor, as well as some orange peel citrus—emerges at the end of the tasting. This one presents a moderate level of bitterness. After letting it sit for a bit and allowing some of the carbonation to die off, I'm left thinking it needs just a little bit more body; it's sitting on the medium to thin side. Otherwise, it's a smooth drinker.

Quarantine Desirability Rating: I'd rate this one a solid medium with a cloistering factor not unlike kitten doped up on catnip. That li'l rascal completely tweaked my iPod. Now I have nothing to listen to as I walk around the neighborhood counting the number of ward houses on the same street in any given grid. The maximum is five by the way, with one being a stake center. Anyway, thank Thor I had a can of This is Fine tucked into my Speedo.

Fisher Pink Boots: You get no fancy tricks with this one. I cracked the crowler open and was met with a solidly unfiltered amber clarity and two raised fingers of dense, rocky, foam The nose was a curious mixture of minty pine and sweet tropical fruits. It kind of put me in mind of some New Zealand IPAs that I've had.

The taste was very fruity—tropical fruity, like one of those Dole Fruit Cups that mom would always put in my Six Million Dollar Man lunch box. The fruitiness overlays a light mintiness, shored up by a crisp malty backbone. Man, this ale is dee-lish! The relatively low 5 percent ABV made it just that much more drinkable, and soon I had swilled away half of the crowler. I wanted more from the ale, but the reality of the beer's style kept it to a low semi-dry roar. I didn't want it dipping into the realm of sweetness, but maybe just a hint of more hop fruitiness, even though the various malts were doing their job to keep things on an even keel. This was quite enjoyable and it deserves to be tried again and again.

Quarantine Desirability Rating: Medium to high. This 5 percent ale will put hair in places most men and women may not be accustomed to having it. First sip: Your voice drops into the basement. Second sip: Reveals one of those Conan the Barbarian broadswords in your non-beer-holding hand. At this point, your partner gives you an epic eye roll and goes back to reading their book, but there's no turning back. The sips become more like swills, and you look into the kitchen to see the Kurgan from the Highlander movie; he nods in approval. You realize that there can be only one—beer, that is—and this is it. Pink Boots? Yeah, that's what I'm talking about!