I'm With The Band 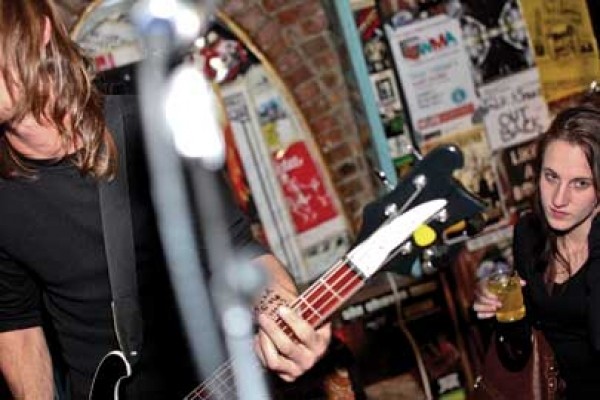 A decent number of Utah bands have been known to make waves on the national stage. In the past three decades alone, Utah gave birth to rampant punk groups (watch SLC Punk), the ’90s Utah County scene—which served as a ska mecca—and even present-day Billboard chart-toppers like pop-rock band Neon Trees.

Yet, newcomers might think the Salt Lake City music scene consists of a few rock bands playing at bars. Let’s debunk this myth here and now. Below, you will find a sample of the assorted genres and bands that grace stages at local venues. As there are too many quality bands to list them all here, what follows is a good start to music appreciation along the Wasatch Front.

The Horseshack in Rock Island, Ill.—the recording studio for Daytrotter.com—is a place where all young indie bands go to explode, it seems. In 2012, The Devil Whale was one of a select few local acts to record for the website, and the reason why is a no-brainer. Backed by a rich, warm soundscape of nostalgic folky grit, frontman Brinton Jones lays out thoughtful, literary lyrics in his distinct croon. Listen to the 2011 release Teeth, which oscillates between sunny Utah sweetness and crunchy Wasatch rockiness. TheDevilWhale.com

There are rock bands and there are sludgy bands, and then there are those bands that are just plain dense—in tone, in content and also in their many skills. Eagle Twin shreds a mighty riff, which bursts forth from fully stacked amps, alongside the heady content that guitarist Gentry Densley sings—myth-based ideas about life cycles and such. Aided by the pulsing, pounding rhythms of Tyler Smith, the duo dropped a mighty fine disc, The Feather Tipped the Serpent’s Scale, in 2012 and even toured internationally, providing support for Russian Circles in Australia and New Zealand. Southern Lord Records

Singer-songwriter
Joshua James
If you’re going to sing songs full of sage-like wisdom, you’d better have the pipes of an old soul. In a velvety voice with a slightly calloused texture, American Fork-based singer-songwriter Joshua James croons about mysticism, his misgivings about organized religion and a search for the divine. His sincere, semiautobiographical songs feature his uncanny ability to turn a phrase and leave you something to ponder for days after—and warrant hitting the repeat button immediately. James is also the co-owner of Northplatte Records, one of the premier independent record labels in Utah. JoshuaJames.tv 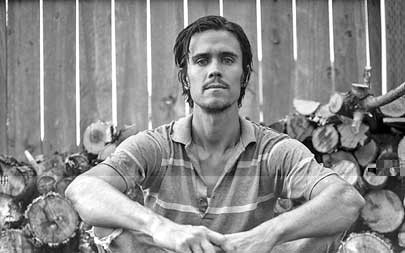 
Afrobeat
No Nation Orchestra
When Stephen Chai stepped out from behind his several bands—some of Utah’s finest, Laserfang and Night Sweats—to launch his own unique project, the multi-instrumentalist and talented songwriter created an enthralling afrobeat ensemble. Numbering a dozen or so, No Nation Orchestra is not only fun to watch onstage, but plays candy for the ears. Syncopated percussion provides the backdrop for a brass ensemble and dancing guitar and keyboard melodies. The collective melds some unique elements of the Talking Heads, Fela Kuti and even Prince. NoNationOrchestra.com 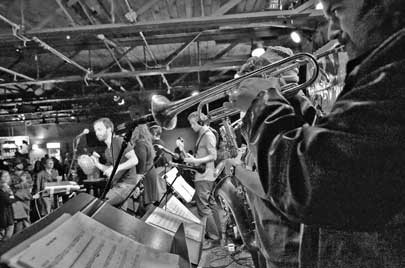 
Underground Hip-hop
Burnell Washburn
It’s obvious from Burnell Washburn’s rhymes that Salt Lake City holds this MC’s heart. In his excellent 2011 release, Food of Love, and the 2012 10-song follow-up, An Apple a Day, Washburn takes his audience on a tour of the Wasatch Front—from ski resorts and record shops to skate parks and dives—creating a sense of place that will make you fall in love with the town as much as Washburn. And all that’s on top of a killer work ethic, national tours and hosting the monthly Wasatch Renaissance gigs, which bring national talent to town. Washburn is the total rap package. BurnellWashburn.com 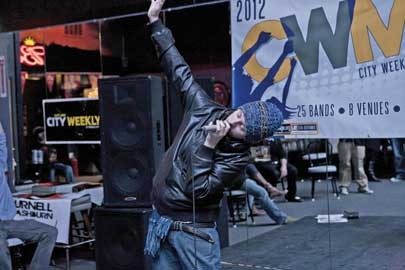 
World Music
Matteo
This Salt Lake City quintet draws upon traditional Western stringed instruments for their sound, but distinguish themselves with the use of a slew of Chinese ones as well. It’s East meets West—simple Americana folk meets the hard-to-pin-down arrhythmic stylings of traditional Chinese music. While The Morning Market—Matteo’s lush, harmonious debut album—was slightly more Western, their new EP, The Sichuan Project, recorded during an artists-in-residency program in Sichuan, China, is more heavily Eastern, and shows these Utahns becoming more competent and capable with their challenging stringed instruments. Matteo.bandcamp.com

Reggae
Natural Roots
Natural Roots’ sound has evolved and the lineup has changed over the years, but one thing has remained constant: “We write songs with meaning and purpose—even the love songs are roots-based by nature,” says frontman JanWillem van der Beek. Their latest album, Words of Jah, was released on European record label Continental/Heartbeat; the label just couldn’t say no to the band’s smoothness, bass-y echoes, snakelike horns or enchanting rhythm-guitar chugging. It’s what you’d expect from a national reggae outfit, but it’s all Utah. Facebook.com/NaturalRoots801

Whiskey-drenched Folkgrass
Folk Hogan
How long does it take for whiskey to boil in hell? Only Folk Hogan knows. Well, they at least love the chest-pounding power of the brown drink, the spookiness of the macabre and are wont to sing, “We are gods/ We are a band of mighty souls.” Their debut album, Band of Mighty Souls, offers up 12 tracks that pay homage to punk, gypsy-rock and the fervency of newgrass in a Royal Rumble of notes, melody and rhythm. When unfolding their high-energy folk punk, this seven-piece is a raucous thing to behold, as any fan who’s seen them busking on the streets or playing into the wee hours at a bar can attest. FolkHogan.com

Contemporary Doo-wop
Bullets & Belles
The overall aesthetic of this minimalist three-piece harkens back to something like Billie Holiday meets doo-wop, Bing Crosby minus a swinging horn section, or classic pop meets indie contemporary songwriting. Bullets & Belles label themselves as “contemporary doo-wop” and “whimsical soul.” And when the two female voices come together in a scratchy harmony on top of piano, acoustic guitar and drums—like on their brand-new 2013 LP, Be Glad—you might pull out a hankie and swoon. BulletsAndBelles.com

DJ/Dubstep
DJ illoom
As host of the third-longest-running dubstep night in the country, James Loomis—aka DJ illoom—knows a thing or two about getting people moving on the dance floor. Loomis says that dubstep is essentially a cohesive group experience; it’s the bass that congeals a mass of folks. In 2004, illoom was on the forefront of this new two-step musical movement, which steadily gained traction, becoming a worldwide phenomenon. Despite the popularization of bro-step (think Skrillex), DJ illoom—as producer and DJ—is a purist, and his sets are as out-of-the-box as they are mind-blowing. And that’s why he won DJ of the Year award at the 2012 City Weekly Music Awards. Soundcloud.com/illoom 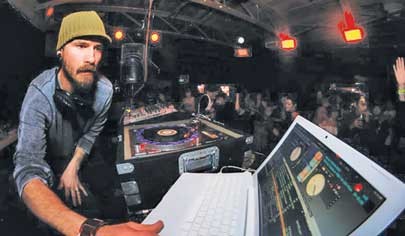 
Acid Jazz
The Chickens
The Chickens are versatile, to say the least. They can morph with ease, gig to gig, from the occasional four-piece jazz-heavy lineup into the hard-boppin’ afrobeat-meets-acid-jazz septet, or into the odd iteration at several gigs where the band had a “frontman” who wore a costume, ate fried chicken and talk-sang. Oh, yes, it’s always an adventure with this local instrumental super-group of stalwart musicians. Facebook.com/WeAreTheChickens 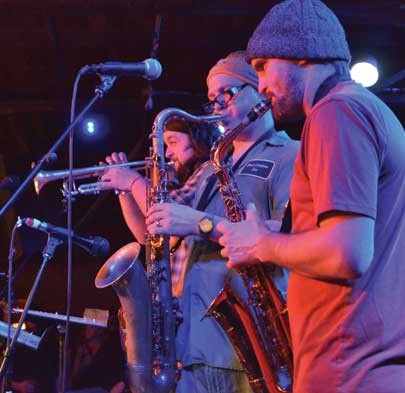 
Country
Folka Dots
When your major influences are Hank Williams and Patsy Cline, I’m intrigued. When you have two multi-instrumentalists behind the frontwomen, switching between unamplified stringed instruments for a barefoot-in-the-grass sentimentality, I’m a fan. And when you top all that with songs inspired by the South, sung in three-part harmonies by three lovely ladies, well, I’m sold. The Folka Dots not only offer up a provocative brand of old-timey country with a Western tinge, they also steal several hearts at each show, be it at a farmers market or in a venue. TheFolkaDots.com 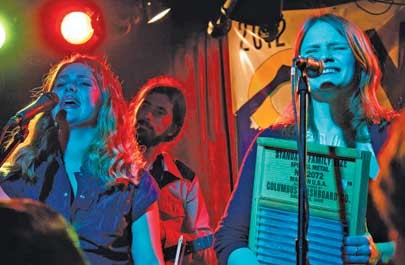 
Rock & Roll
Max Pain & the Groovies
When your first concert involves a broken chandelier and a flame-blackened carpet, you’ve probably found a winning recipe for rock music. For Max Pain & the Groovies, that recipe is equal parts Black Sabbath, Deep Purple and cheap American lager. This five-piece band has come a long way in their three years of making music. In 2012, they won Band of the Year at the City Weekly Music Awards, as voted by fans and concert-goers. A Max Pain concert is an all-out affair, with fans juking and gyrating as if possessed by the band’s brand of psych-blues-rock, as can be heard on the 2011 release Tortilla Gold or their spooky Halloween-themed five-song EP. ReverbNation 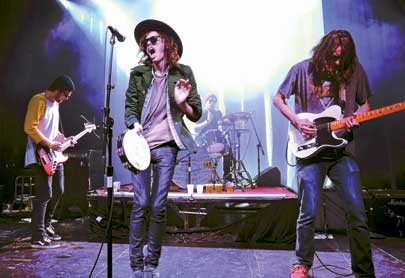