A brilliant set of irreverent questions 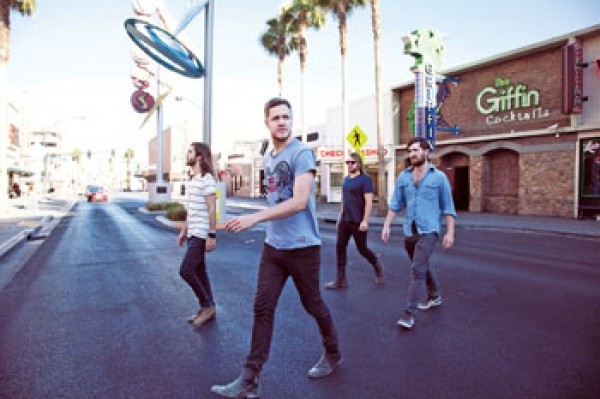 It’s the stuff of dreams, Imagine Dragon’s chart-soaring 2012 LP Night Visions. Based largely on the subconscious nonsense that comes during deep sleep, the album—and singles “It’s Time” and “Radioactive,” both of which reached the Top 20 on Billboard’s Hot 100 list—struck a chord nationally and launched the Las Vegas-based band into stardom.

We wanted to chat with these skyrocketing stars, but not in the typical fashion. You know those silly questions that some interviewers sneak in at the end of an interview with a band? Well, Beside the Question is a blog series at CityWeekly.net dedicated exclusively to those random, ridiculous wringers—because, after all, you can’t be serious all the time.

So, in this style, guitarist Wayne Sermon took some time from the road to answer a series of nonsensical questions—also the stuff of dreams:

City Weekly: You’ve said that some of Night Visions’ lyrical themes have come from dreams—even nightmares. Please describe one nightmare.

CW: I keep having this dream—since I was, like, 12—that I’m being chased by a T-rex. Please analyze.

W.S.: The T-rex represents your fear of commitment. Maybe it’s time to settle down.

CW: Speaking of dinosaurs. Salt Lake City has this really neat Natural History Museum of Utah. I’d totally recommend going. Do you think that the band will like the dinosaur exhibit or the butterfly exhibit more? Why?

W.S.: The dinosaur exhibit, for sure. It’s crazy that those animals actually roamed the Earth. I read about this eccentric Australian billionaire who wants to clone dinosaurs—like in Jurassic Park, but for real. I’d be way down with that.

CW: All the kids in Provo claim Imagine Dragons as theirs (kind of). Can you compare/contrast Provo with Las Vegas?

W.S.: The bands’ current lineup started in Vegas. But we have close ties to Provo, and some of our favorite shows early on were at the Velour Music Gallery. Provo feels like our second home.

CW: It’s been said that Imagine Dragons is actually an anagram, which only the band members know. Will you tell me?

W.S.: I would, but then we’d have to send a swarm of ninjas to kill you. And I really don’t want to have to do that.

CW: That wouldn’t be so bad. But the anagram had better be worth it. Well, what can I do so you’ll tell me?

W.S.: It’s funny, because we really never meant to be so taciturn about the whole thing. But then we had all these fans coming up to us with all these great possibilities. Stuff like “aged men’s radio” and “Romans dig Angie.” It became pretty entertaining to hear all these creative guesses. We have just kept it going over the years.

CW: You’ve probably gotten a lot of questions about rising up the Billboard Hot 100 list ... but probably not this one: How many anagrams can you make with the word “billboard” in 60 seconds? Go. I’m timing you.

CW: OK, here’s the last (and best) question: I have an idea for a concept album. It would consist of 24 one-minute songs, each about a different hour of the day. If you were to do this idea (but you can’t, because it is now copyrighted ... sorry), please give us a description of three songs, including name, hour of the day, genre, lyrics and so on.

W.S.: You’ve already got the ball rolling on that idea. You don’t need much help. All I know is that a good eight hours of that would be about sleep.