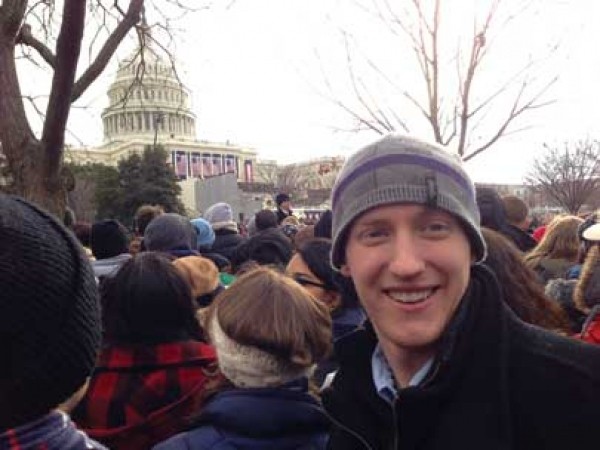 Nick Holland is the Young Democrats of America’s southwest regional director, works for the Utah AFL-CIO and is in his final semester of earning a master’s degree in international affairs & global enterprise at the University of Utah. He was a delegate from Utah’s 4th Congressional District at the 2012 Democratic National Convention. Holland went to the inauguration of President Barack Obama in Washington, D.C., in January and reported back to City Weekly with his impressions.

As a Democrat, what did you hope most would manifest at the inauguration ceremonies, and did it?


I was hoping to see the president make some kind of commitment to the working class, and though he was fairly bold, what I came away with was slightly different than what I was expecting. He said, “We must act, knowing that our work will be imperfect. We must act, knowing that today’s victories will be only partial, and that it will be up to those who stand here in four years, and 40 years, and 400 years hence to advance the timeless spirit once conferred to us in a spare Philadelphia hall.” We can’t address the problems for all time, but we have to for our time—it brought tears to my eyes. I found it very uplifting. You sometimes feel, especially as a young person in politics, that you’re not having a big impact, but it was very encouraging to me to keep working at it.

Did you get a sense, beyond the inauguration itself, of the sometimes-heated issues in the air in Washington?


From the people attending, I gathered a sense of partisanship. But the people officially involved maintained a tone that was much more bipartisan. One of the hallmarks of our government is the peaceful transition of power, and prominent Republicans appeared very professional.

At the inauguration ceremonies, did you get a feeling for the magnitude of the office?


There have been only some 50-odd inaugurations in our nation’s history. The historical nature of the event was breathtaking. Seeing the presidential seal displayed, I thought of all the preparation that went into it and the sheer number of people there to witness the event.

What was the most unusual thing you saw during the inauguration weekend?


At the inauguration, when Paul Ryan came out and people booed, it seemed very odd. The low rumble sounded like Darth Vader at first. Also, all around town, military Humvees were blockading various locations. I had never seen such a large military presence before. And protesters screaming through a megaphone during a prayer, though everyone seemed to ignore them.

Who was the most impressive or interesting person you met there?


We arrived at the gates to get in before dawn. I was standing next to a gentleman from Tallahassee, Fla., who was so excited that the cold didn’t even faze him, standing out there for six hours. He was rallying everyone for whoever was speaking—Joe Biden, even for Kelly Clarkson singing. He was the life of the party. His enthusiasm was infectious.