Iosepa comes alive for a weekend to celebrate exodus centennial. 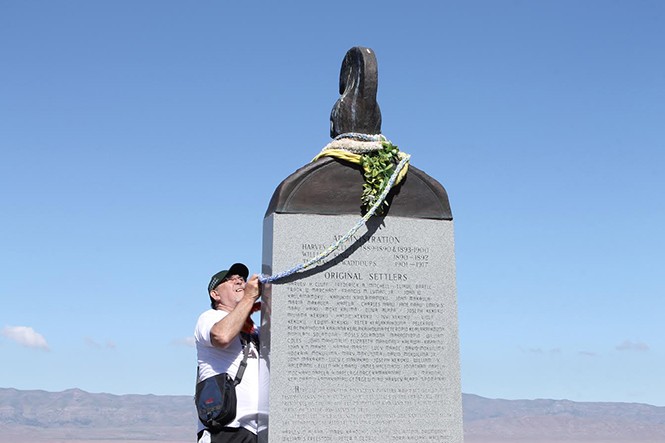 To start, there's little left of the former town—the only remaining piece being a rusted fire hydrant embedded in a hulking, lava rock memorial. The rest has been torn down, demolished or buried in the years since its inhabitants made a trickling exodus from Skull Valley in 1917. Now, visitors will find a pavilion, multiple granite memorials and bathrooms that are not especially luxurious, though the toilets do, in fact, flush.

As for the "ghost" part, it wrongfully implies something haunting and sinister. Sure, the town's centerpiece is a cemetery, but those who frequent the "gem in the desert" know it'd be hard to find a more beautiful and inviting resting place for the dead than what the former settlement offers.

Still, over a weekend in late May, an assorted group of lively people met in the desolate locale to celebrate the passing of 100 years since a majority of Iosepa's inhabitants left the town en route to Hawaii.

The celebration was organized by the Iosepa Historical Association, a group of individuals with both family ties and interest in the town's forlorn history. The association works to preserve the memory of Iosepa's first people, who—in a move orchestrated by The Church of Jesus Christ of Latter-day Saints in the 1880s—settled on a roughly 2,000-acre sect of land that was soon given the Hawaiian name for "Joseph," Ioespa, after church president Joseph F. Smith. Just as well, the association has charged itself with celebrating the lives of those who called Iosepa home, and those who eventually left.

Iosepa's first celebrations were small, maybe consisting of one family or two visiting the town, but they were celebrations all the same. "It's always an honor to come out here," association president Patricia Kamai said. "We used to come out here to clean the graves and then just go home." The day-trips gave way to weekend-long camping trips, then Polynesian luaus, fit with music ("Of course there was music," she said), and finally the annual commemoration it is today.

Beginning on Friday, droves of cars, some trailing campers and others packed with tents, rumbled away from state Route 196 on a dirt road to the town's site. Only three things were on the agenda that night: "Kick back, talk stories and Kanikapila"—a style of Hawaiian jam music and dance. The rest of the weekend would include music and dances from a Hawaiian, New Zealand, Fijian, Samoan and Tahitian group; storytelling; a re-creation of the Polynesian pioneers leaving Iosepa; a luau; and a culminating LDS church service on Sunday.

Come Saturday morning—the day which most of the weekend's celebration took place—campers, tents and cars surrounded the town's cemetery and the pavilion just to the east, creating the look and feel of a community, if just for the weekend. Slowly, a populace of morning weed-pullers migrated to the cemetery to clean it, wearing thick gardening gloves and carrying garbage bags. The sounds of strumming and singing sprang from the pavilion and beyond. Nobody at the celebration, it turns out, is a stranger. Conversation starts easily: "What's your connection? Do you have family buried here?" one attendee asked.

There are 79 individuals buried in the Iosepa cemetery, and only a select few bodies lie beneath an identifying headstone. Almost all those buried here are honored and remembered by white, rectangular blocks placed in a line on the easternmost side of the cemetery square. Splitting the line in half is a towering obelisk memorial, with a bust of a Polynesian man in place of the usual pyramidal point at the top. By mid-morning, the bust wore leis around its neck—some made from intricate braids and others of a fuzzy material that moved with the wind. The blocks on either side were adorned by shell necklaces and purple orchids.

Ashlyn Navarro Algee, whose great-grandmother is buried there, ordered the orchids from Hawaii and brought them with her on her venture from Las Vegas, Nev., where she lives. Navarro said she first heard of Iosepa online and later learned she had family buried in its cemetery. With her husband in tow and proudly donning a tattoo on her forearm of her great grandmother's last name, Imaikalani, Navarro made her first ever visit to Iosepa that weekend.

Having never seen the desolate Skull Valley before, she was in awe that the Polynesian pioneers survived—even thrived—there.

"Jesus," she said, "they stuck them out here, in nowhere? They were probably freezing."

Iosepa's first inhabitants did, in fact, struggle initially with the conditions in Utah's west desert when they arrived in 1889. The Polynesian pioneers battled a new climate and especially diseases—namely, pneumonia, smallpox, diphtheria and even a few cases of leprosy. But, after only a few short years, the town was made up of "beautiful lawns, gardens, flowers and trees," one historical publication reports. By 1911, it was dubbed Utah's "most progressive city."

Locals thrived, which makes their sudden departure even stranger. Ostensibly, the inhabitants returned to Hawaii at the hand of then-president of the LDS church, to help build the Laie temple. The Polynesian pioneers, many celebration-goers said, initially came to Utah to be near a temple, and once the intent to construct a temple in Hawaii was announced, many of Iosepa's citizens opted to leave. One report by historian Ouida Blanthorn suggests, however, that "growing homesickness of some, and perhaps a certain disillusionment with the segregation effectively practiced by the [LDS] white majority" might have contributed to the people's impulse to leave.

Whatever the reason, the former inhabitants' spirit and love for the town—the same report gives an anecdote of Iosepa women weeping while leaving, "uttering: 'Goodbye, Iosepa, goodbye, Iosepa'"—is carried now by ancestors and celebration-goers.

One of the most boisterous carriers of the Polynesian pioneers' spirit is Vermine Haws, or, at her insistence, "Tutu," meaning "grandmother" in Hawaiian.

Tutu's grandparents met in Iosepa and were part of the group who first settled the town and then returned back to Hawaii in the early 20th century. Like the ancestral pair, her own journey to Skull Valley began in Hawaii when she met her husband in 1953 while he was stationed at Pearl Harbor. A year after meeting, the two married and Tutu soon arrived in Utah.

She was wild and had a difficult time adapting to the move at first, she said. She used to smoke and drink, and walked around town barefoot, shouldering all the troubles that came with being a non-white woman in whitebread, 1950s Utah. Though out of place, Tutu found solace in Iosepa, and has done the yearly pilgrimage, husband and family in tow, since 1956.

One of the stranger moments over the weekend came when a flock of seagulls, seemingly appeared from nowhere, their flight trajectories weaving a kind of blanket above the town. Anyone with at least a small knowledge of Mormon pioneer lore understands how ripe a sudden flock of seagulls is with significance. Sure, the birds' appearance could have been on account of the celebration-goers' food, the town's proximity to the Great Salt Lake, and so on, but the serendipity for Tutu and others gazing at the birds with intrigue was not lost.

"I've never seen this before," Tutu, leaning out of her camper while placing her hand on her brow to quell the sun's glare, said.

The seagulls swirled and dived over the cemetery alive with people.

"This is something special," she mused.