The Trip to Greece again celebrates lighthearted time spent with a good friend. 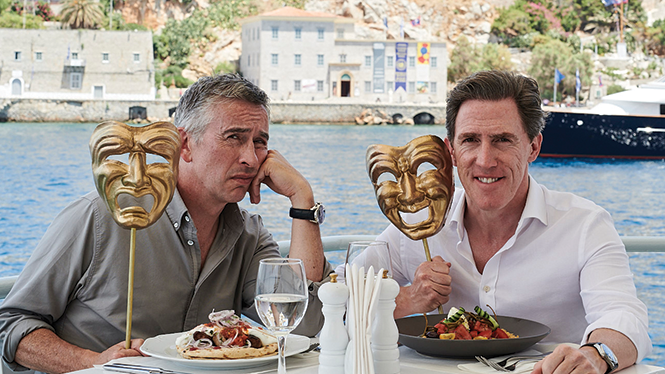 There's a bittersweet timing to the arrival of The Trip to Greece, the fourth installment in the decade-long series of adventures starring actor/comedians Steve Coogan and Rob Brydon. This is, after all, a series based on traveling, eating in restaurants and casual hang-out time between friends—all things that are in fairly short supply at the moment.

The ability to enjoy all of those things by proxy makes The Trip to Greece a particularly welcome arrival, even though they've always been enjoyable diversions. Like the three previous films—2010's The Trip, 2014's The Trip to Italy and 2017's The Trip to Spain—it's an edited-to-feature-length version of a six-episode BBC TV series, with the loose set-up of a journalistic assignment sending Coogan and Brydon (once again playing thinly fictionalized versions of themselves) on a week-long journey to picturesque locales. They scout sights of historical interest; they eat wonderful-looking food; and mostly, they exchange banter over their meals and/or while en route to their next destination.

That banter is the primary reason to chill out with the Trip films, mostly-improvised bits built on the wonderful chemistry between the two. One-upmanship has always been a key part of their dynamic—Coogan attempting to assert his alpha-dog status as multi-award-winning performer, with Brydon puncturing his ego—as they exchange celebrity impressions or nuggets of trivia. And if those exchanges draw hilariously from their real-life work—like Coogan's starring role in Stan & Ollie inspiring Brydon to wonder about a story involving Stan Laurel and Tom Hardy, in full The Dark Knight Rises Bane voice—so much the better.

But there's an interesting way in which that relationship seems to have softened in The Trip to Greece, perhaps partly built on the observation of how long they've been doing these travelogues together. Both Coogan and Brydon actually laugh out loud occasionally at one another's performances, making those moments less about which one of them is "winning" the exchanges. As much as they can lose themselves in their shtick—to the point that they might forget that someone else is on the other end of a phone call while they're riffing—they genuinely seem to appreciate one another.

As was the case in all of the other Trip features, there are occasional diversions here to see what's going on in Coogan and Brydon's personal lives, most specifically here Coogan's concern about his ailing father. Mostly they've felt like awkward attempts to provide a sense of seriousness and consequence to these otherwise thoroughly light-hearted affairs, but for some reason there's a bit more gravitas to everyone's appreciation that time is passing, and that it's important to appreciate what you have when you have it. Sometimes it's a wonderful meal. Sometimes it's a visit to a beautiful city. And sometimes it's time spent laughing with the kind of good friend who, when you note that you want to come back to see something you missed during your trip, assures you, "We will."

Also New This Week
DIANA KENNEDY: NOTHING FANCY
3 Stars
[Opens May 22 at SLFSatHome.org and ParkCityFilm.org]

A wise documentarian knows when to let a lively subject take the reins, and director Elizabeth Carroll does just that with her profile of 95-year-old Diana Kennedy, a British-born, self-taught chef whose multiple cookbooks on regional Mexican cuisine made her the country's culinary ambassador to the English-speaking world. There's a bit of biography just to lay the foundation—notably her arrival in Mexico in the 1950s with her journalist husband—but mostly Carroll focuses on Kennedy in the present day, as she cooks, teaches and lectures about the food she loves. What emerges is a delightful portrait of a feisty, tart-tongued, opinionated woman, but not merely one who has grown that way with age. Her perspectives are based on deep principles—to sustainable living, to honoring traditional cooking methods—and an independent streak that has defined her entire life, as Carroll shows in a great sequence cross-cutting between Kennedy making the same recipe some 40 years apart, with exactly the same refusal to compromise. If there's one complaint to be made, it's that 72 minutes isn't long enough to spend with someone who has built her own life exactly the way she believes a life should be lived. CW