The Utah Arts Festival comes back a little bit different, and a lot the same. 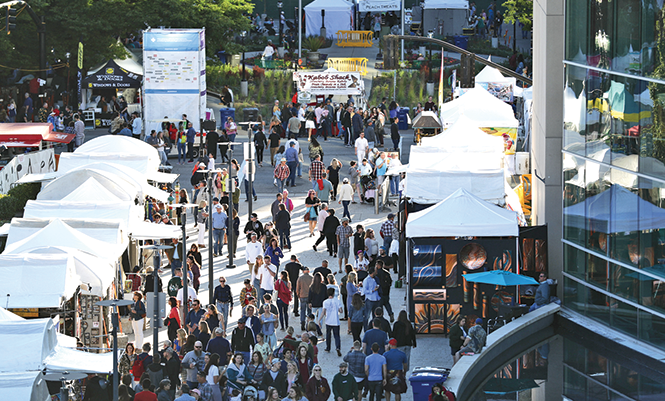 In the fall of 2020, when Aimée Dunsmore was announced as the new director of the Utah Arts Festival, taking over for retiring long-time director Lisa Sewell, Dunsmore acknowledged to City Weekly that there was probably something a little crazy about taking over an arts organization in the middle of a pandemic. So what does that decision look like now, with nearly a year in the rearview mirror?

"Still a little crazy," Dunsmore says with a laugh, "but it's been really good. There are a lot of challenges, but I've been enjoying it. It's difficult for anyone directing events like this right now."

The 2021 Utah Arts Festival returns to an in-person event this year, after cancelling in 2020 and creating an online platform for presentations and for selling artists' work. While that experience provided the opportunity to continue more virtual content this year, Dunsmore says that there actually won't be very much virtual content this year. "Our plan was to do a lot more online this year," she says. "What we learned in feedback from artists is, they're not really interested in that; they want to be in person. ... We're kind of taking our lead from the participating artists, being in person is important to them. That energy, when you're performing or interacting with people, you just don't get that [online]. And I would say that for myself: Things speak to me differently in person than online."

This year's in-person Arts Festival falls in a different time frame than the traditional late-June window, a decision that was made at the time expecting a general downward trending in COVID cases as a result of both vaccines and the summer months. As we now know, that turned out not to be the case, with the Delta variant and lower-than-hoped-for vaccination rates causing a surge that has made late August a less safe time than late June was. While it would be easy now to second-guess the decision to move the festival dates, Dunsmore notes that "when we looked at [changing the dates], at least in my mind, I knew what's happening now was a possibility. We were trying to make the best decisions with the information we had. When we looked at these dates, we still decided to keep artist booths 10 feet apart. ... I guess what we've learned form 2020 is that anything is possible, and there's very little we can control."

For the most part, according to Dunsmore, the 2021 Utah Arts Festival will look much the way it has in other recent incarnations in its current location, with some modifications. As noted above, artist booths will be farther apart, meaning fewer participants, and the Amphitheater Stage will not be hosting live music this year. There will also be no dedicated children's Art Yard, as it has been folded into an all-ages Creative Zone in front of The Leonardo. Dunsmore also mentions that while this year's participants represent those who were initially contracted for the 2020 festival, there is an ongoing effort to improve diversity in representation of both visual and performing artists, beginning with a program to showcase BIPOC performers this year.

"What we're learning," Dunsmore says, "and I think any organization is this way, is that there are things that have just been done a certain way because that's just the way they've always been done. With COVID and the change in leadership, it gives us a chance to look at everything fresh."

It's also true that operations for all organizations remain in a constant state of flux amidst the Delta variant-fueled surge in COVID cases. At press time, the Utah Arts Festival will not be requiring masks for its mostly-outdoor event, and recommending increased distancing between parties. Dunsmore admits that she's not sure what to expect from an attendance standpoint, though online tickets have been selling at a rate she believe is more than usual for the time frame ahead of the festival. "I think you've got people who feel pretty confident, and people who feel concerned," she says. "We've seen fewer three-day passes, so there might be more people only comfortable coming one day, or it might be affected by school being in session. It's really hard to know."

But for Dunsmore, she's considering a different set of criteria for whether the 2021 Utah Arts Festival is ultimately a success. "It's hard to look at that just based on numbers like attendance," she says. "Those are important, and that matters to us. But I look at the energy and the vibes of the event itself, and if we're getting the feedback that this was the best event possible under the circumstances. I don't want to get too hung up on attendance. ... You can definitely tell with the patrons who are there, just from the looks on their faces."