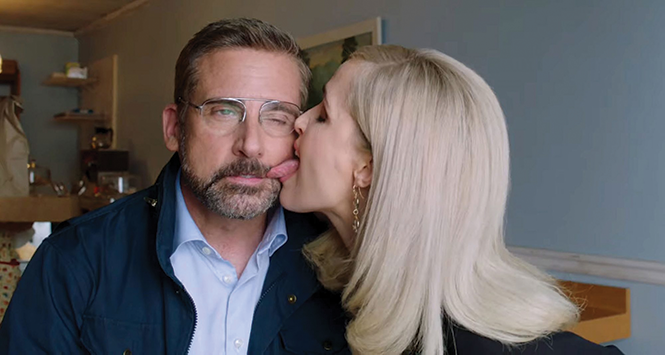 "Satire is what closes on Saturday night" goes the celebrated quote by playwright George S. Kaufman, an assertion that the genre is excruciatingly difficult to make work as popular entertainment. On the one hand, you've got the fact that any time a story is built around mocking something—whether it's a person, a political position, or even another creative genre—you're going to alienate some people who are fans of the thing you're mocking. And on the other hand, you risk being so smug in your certainty that you've figured out what other people haven't, that your story ends up being more self-congratulatory than revelatory.

There's little question as to whom writer/director Jon Stewart's Irresistible is meant to appeal to, and the former Daily Show host is bound to hook at least some of those people. But in attempting to craft a narrative that takes on the entire American political system, he fails at some of the most rudimentary tasks he should have set for himself. For a job that requires the precision of a scalpel, Stewart instead opts to hack at it with a shovel.

Carell is at the center of nearly every scene in Irresistible, and he's too talented a comedic performer not to serve up some great moments, particularly as Zimmer writhes in horror every time he realizes he can't match the blithe willingness of his Republican consultant counterpart, Faith Brewster (the always-sublime Rose Byrne) to say absolutely anything it takes to win. But despite a set-up that would have made it so easy for Zimmer to become a complicated character—potentially more interested in exorcising his personal sense of failure than in shifting the political conversation—Stewart doesn't seem at all interested in that kind of complexity. While Brewster may be far more obviously an exaggerated type, Zimmer isn't far behind.

Satire is bound to traffic in types, of course, and Stewart isn't shy about "both-sides"-ing his sense of what's wrong with American politics. As bitter as he is about the blathering punditocracy of cable news, he's also prepared to take shots at the limousine liberals Zimmer gathers in New York for one of Col. Hastings' fundraisers. And while it's clear that his ultimate target is a corrupted system in which both major political parties participate, it's hard to leave Irresistible with anything but a sense that we're totally fucked, with no actual hope for anything to change—which is kind of a hard sell for what is ostensibly a comedy.

It's also rough that, in the absence of Carell's Zimmer as a bona fide protagonist worth rooting for, there's simply nobody else to fill that role; the closest approximation is Col. Hastings' daughter (Mackenzie Davis), who remains enigmatic for most of the film's running time. Stewart wants to add some nuance to the idea of Middle-American "just plain folks," beyond their status as a political prize to be fought over, and to a certain extent he succeeds. But as much as Stewart is able to deliver a few successfully acerbic gags—like Brewster cynically suggesting to Zimmer "20 bucks says I do better with fear than you do with shame," or an info table of gun rights activists abruptly closing up shop when people in Black Lives Matter T-shirts arrive—Irresistible is always a thesis statement in search of a plot on which to hang it, and preferably one that doesn't just feel like Welcome to Mooseport with more f-bombs. If you don't want satire to close on Saturday, or have everyone close their minds, you need to figure out how to say the thing that's obvious to you with just a touch of restraint.