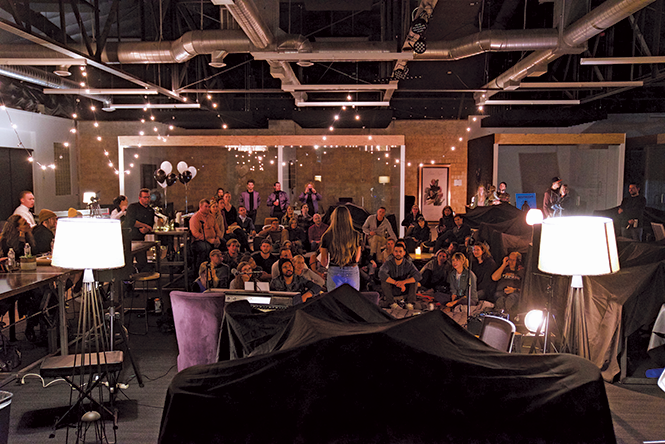 Nothing is immune to app adaptation these days. Enter: SoFar Sounds—an app where you enter a lottery for randomly-selected tickets to a secret show, with a secret venue, and the info is only revealed about two days in advance. Founded in London in 2009 and bolstered by YouTube videos of their performances (sometimes featuring the likes of Bastille or Mumford & Sons in bigger cities), the company seeks to establish a respectful, intimate setting akin to a house show, but with the guarantee of no logistical hiccups along the way.

Salt Lake City local Lily Wachtor fell in love with SoFar during time she spent in Washington, D.C., for an internship, having first heard about it while studying abroad. Upon coming home, however, she found that SLC had no SoFar presence. So, she took it into her own hands, volunteering to serve as a show organizer. She's already on her third show, which features up-and-comers Moodlite, Krooked Kings and Southern Utah-based Kaitlin Sevy on Friday, Nov. 22—a spoiler only available because it's already sold out.

"There's obviously a need for SoFar here because I've done, like, zero promotion and all of the shows have sold out," Wachtor says about her first two shows—both pop-ups at random local spots like Black Feather Whiskey's speakeasy. "It's the name, for sure. I think people heard of SoFar Sounds, like I had."

Wachtor says audiences are supportive and engaged, some offering to film the shows. Wachtor herself has been learning about setting up sound, with PA equipment she rents with her cut from SoFar making it seem all very DIY. In a 2017 piece at Northern California public radio station KQED, the former SoFar San Francisco City Director Dean Davis described SoFar as achieving all the intimacy and community of a true DIY show, "with more organization."

Wachtor is joined in her enthusiasm in SoFar's ability to invigorate the SLC music scene by Amanda Guisbond. A recent Boston transplant, Guisbond's marketing background and enthusiasm for figuring out the SLC music scene resulted in her becoming Moodlite's manager, as well as collaborating with Wachtor. "You have the known format, the global brand and reputation, and with that the backing and support of a global brand. So you know you're going to get a fun show, with great artists, an enjoyable venue and it's going to be consistent with other experiences in other cities," Guisbond says of SoFar's global glam appeal.

Guisbond envisions SoFar's presence as a natural next step on SLC's path to being a destination city like those on the coasts, the Pacific Northwest or even Denver, moving in lockstep with the local "tech cluster, the investment dollars" to get there. But, she marks SLC as filled with a potential that bigger cities she's lived in didn't have. "Boston and San Diego, my former homes, are highly established, highly saturated places where something like SoFar might get lost in the bigger context, whereas here, it has a chance to be a part of the movement toward SLC becoming a major city and a music hub," she says.

SoFar, like other companies bringing in cash to build new businesses, can certainly fund an attempt to make SLC into the kind of music hub that Guisbond envisions. Although the shows co-opt the intimate setting and sense of secrecy that's surrounded the genre for as long as they've been a thing (forever), the advent of a $15–$20 charge in recent years, in lieu of the formerly free model, has added to money already flowing in from investors. Bands and artists make $100 each off a SoFar evening, which, though it surely thins out between band members, is in line with the rather low compensation that local bands are already being paid (or not paid) at many other venues. A true house show will usually be donation-based (SoFar used to be), with all or most proceeds going to the band—though it's a struggle to name even five houses or shops that regularly host house-style shows.

Guismond embraces the notion that SLC is ripe for more. The reception by concert goers and bands—in an interview last month with Krooked Kings, they expressed that they'd love to get on the bill for a SoFar show—points in the direction of open arms and good reception. Though there is no shortage of shows in SLC (just scan the lists in City Weekly and SLUG Magazine), there's no doubt that a fresh new way to enjoy shows is also overdue. SoFar might expose new folks to the model of the house show, or the value of supporting local talent. If SoFar becomes part of the "fabric of SLC," like Guisbond theorizes it could, then here's to hoping it gets people out not just in the name of SoFar, but in the name of experiencing and supporting the music scene altogether.