In the Key of Sea

Douglas Morton composes to the rhythms of an aquarium's inhabitants. 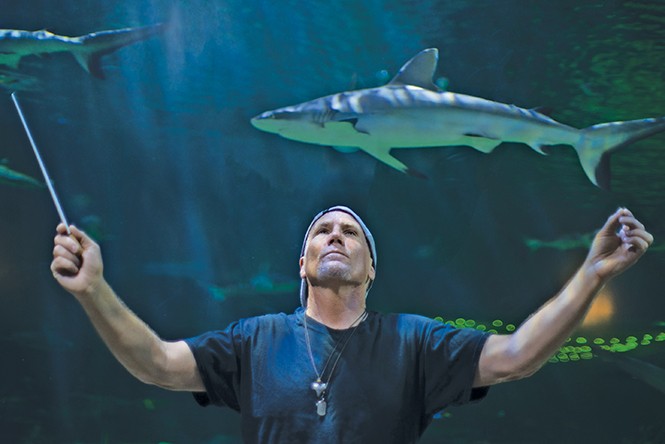 It would be tempting to say there's something fairly fishy about Douglas Morton's music. Or that his music goes over swimmingly with audiences. Then again, who would take that bait?

OK, enough with the puns. Still, it's hard to resist when it comes to describing Morton's muse. An accomplished musician, composer and sound designer, he's now turned his attention to making music intended for aquariums, taking his cue from the movements of their watery inhabitants and other creatures of the deep.

A self-taught keyboard wiz, Morton began making music seemingly spontaneously as a child, hanging out in a local music store and dabbling on whatever instruments he could get his tiny hands on. Later, after resettling in Northern California, he became infatuated with digital sampling and music technology, helping usher in an advanced wave of computer-driven audio software that could be put to practical use.

His efforts began with creating percussive samples for early drum machines, and then continued with the development of sounds for digital samplers and sampling hardware. In time, his efforts began attracting the attention of a high-profile musical clientele—Pink Floyd, U2, Prince, the Cure, Depeche Mode, Tangerine Dream and Peter Gabriel among them. "Christopher Franke from Tangerine Dream was my first customer," Morton says in a phone interview, sharing his delight in meeting artists he admired. "I was already a fan of many of the bands that were now using my sounds. Sampling technology led me to artists that I never would have had heard of, as well."

It wasn't long before Morton's compositions and virtual instrument design began to show up on albums, television shows and feature films. Then, in the early '90s, Morton found another source of inspiration during a scuba diving expedition off the coast of Southern California. Working with staff members from the Monterey Bay Aquarium with whom he had gone diving, he began creating soundtracks to accompany the aquarium's various events and exhibitions.

That pursuit eventually led him to Draper's Loveland Living Planet Aquarium, which invited him to create music that could be played in sync with the movement of their sea creatures. It introduced an auditory element that could ultimately enhance their visual displays and create a fuller sensory experience for guests.

"It's very similar to scoring [music for] dancers," Morton says. "The ocean is full of interesting timbres, dynamics and colors. ... There's an entire orchestra under the surface. A school of fish is a section of flutes, a pinnacle is a low bass, the current is the tempo." He calls the result "a truly revelatory experience."

It's that sort of spectacle that Morton intends to share when he performs at the Living Planet Aquarium. The event includes Morton playing live in front of the Ocean Explorer Shark exhibit and the jellyfish one, in the first of three performances scheduled at the aquarium this summer. The program includes several of his earlier marine-inspired scores, as well as the composition of new soundtracks—accompanied by guitarist Terence Hansen and multi-instrumentalist Leraine Horstmanshoff. In addition to giving the audience opportunities to interact and ask questions during the performance, the music will be recorded throughout the day and posted on Soundcloud, allowing guests to listen to the final results and then leave their comments.

Although his music has become part of the programming at the aquarium, Morton says he's looking forward to performing it there live for the first time. Initially, he thought of doing a traditional concert, but later came up with the idea of doing a day-long, interactive event that allows him to compose spontaneously while drawing inspiration from the movements of the aquarium's creatures. "It's very inspiring musically," Morton says. "We're so accustomed to experiencing the final results of films, concerts and exhibits that I thought it would be cool to show how it's done live."

Morton credits what he calls "a terrific team of creatives" with helping bring the idea to fruition. He singles out artist Billy Hensler for the massive murals throughout the aquarium and Aryeh Robinson for designing the exhibits, while citing the aquarium's staff members for creating an extraordinary immersive experience. He hopes the new music eventually works its way into soundtracks for various exhibits.

Morton says he's especially excited to see the audience's reaction. "Hopefully, they'll leave inspired and enriched," he says. "I hope to offer the notion that you can convert what you see into musical ideas and sonic images."