The Avenues' own Indian grocery/cafe 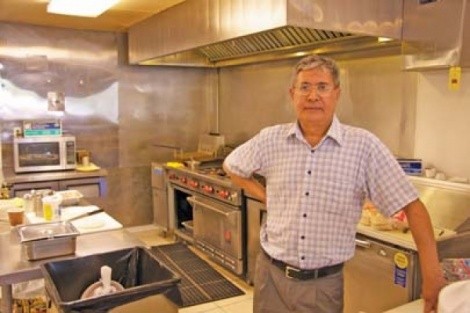 Food writers are always looking for the newest, best thing. Sometimes, though, it pays to go old school.

Thirty years ago, Arif “Marshall” Motiwala opened his Indian-grocery market inside an historic building in the Avenues. “I was the first person to introduce Indian grocery and supplies to Utah, right here in 1980,” Motiwala says, beaming. The store was the first of its kind in the entire region, he says, and drew customers from as far as Las Vegas.

The son of Indian parents who migrated to Pakistan to escape the persecution of Muslims, Motiwala merges the two conflicting cultures in his store/cafe, with more flavorful nuance in every veggie samosa than in the whole of the Kashmir border. Take, for example, the coriander avocado sauce that packs a mini heat missile. The stuff is foodie crack and should be sold by the gallon. It comes as a side with nearly everything on the menu, but when heaped atop a grilled beef-and-spice patty known as the Shami kabob, it elicits involuntary squeals.

His menu offerings are “like home-cooked. It’s not really a ‘restaurant’ restaurant,” Motiwala says. And it does have that familiar neighborhood-cafe feel, where everyone who enters is an old friend and the food is comfortable, accessible—read: not typical highbrow—Indian dining.

Since the menu items fluctuate from day to day, the best advice is to opt for the daily combo plate, which includes Tandoori chicken, rice, curry and naan, with the aforementioned coriander “drug” sauce. It’s a bargain, especially since it’s a portion big enough to share.

Of the people who come into the shop, Motiwala says, “I mostly get Avenues people. They like authentic food, you know what I mean?” Well, to those Avenues people who literally have the corner on the (Indian) market, it’s time to share.