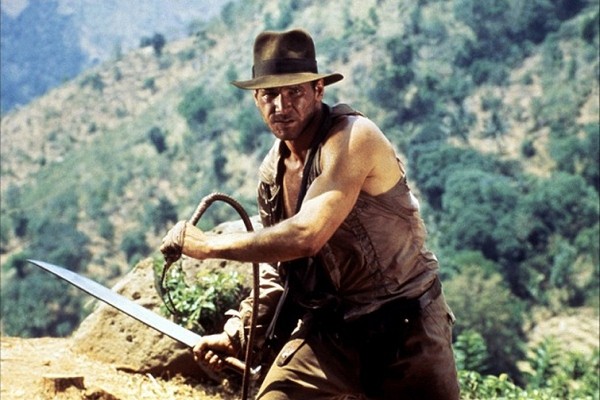 Sometimes, it’s incredibly refreshing to go to the theater to see a movie you know is great. When I heard Raiders of the Lost Ark was going to be re-released in IMAX, even if it was just for a week, I knew I’d have to be there. The Indiana Jones movies are a deep and geeky passion for many—myself included—and seeing the best of the films on the big screen for the first time proved too great a temptation.

The IMAX release of the film was designed to show off the fancy new high-definition transfer and cleanup of the film that was done for the Blu-ray box set (released Sept. 18), and I was quite pleased with the results. And since so many worry about George Lucas’ involvement in his own properties: The answer is no, nothing was changed. Raiders of the Lost Ark has stood the test of time; it radiates an energy that hadn’t previously been seen from Steven Spielberg, and that had been lost in films entirely for generations.

At Dragon*Con, I had the opportunity to ask John Rhys-Davies (who played Sallah in two of the films) about that energy. “[Director Steven Spielberg told us] we need to do something different, to shoot fast,” Rhys-Davies said. “ ‘What I’m hoping we’re going to get is a freshness and an immediacy, throwing paint on the canvas and working it quickly before it dries, and move on.’ And Steven was absolutely right. It was a blast to do. When I first read the script and my agent asked me what I thought … I said this was either going to be the biggest disaster of all times, or it might just set a new fashion in filmmaking—but whatever, I want in.”

We know now that Raiders set that new fashion in filmmaking, and people have been chasing all of its fortune and glory ever since—Spielberg and Lucas included. All of the Indiana Jones films that followed the first are worthy of the title, but each took a slight step down from the film that preceded it. Indiana Jones & the Temple of Doom was a prequel to the first, and gave us a compelling arc in the character of Indiana Jones with a black comedy of a movie that owes as much to the classic Gunga Din as to Raiders of the Lost Ark. It’s powerful and boldly hilarious.

Indiana Jones & the Last Crusade was a Marx Brothers take on the franchise, taking a step up in casting, but a step down in screenwriting, turning some characters we knew and loved into buffoons. Each of these three films was aping a different style of old serial filmmaking from the ’30s and ’40s, and each of them did it brilliantly.

Indiana Jones & the Kingdom of the Crystal Skull is a cleverly written play on science-fiction films of the ’50s that wasn’t well received, but stands up on repeated viewings. Nothing in it is more absurd than anything in any of the previous films and, let’s face it: Aliens are a lot easier to swallow than God’s own relics.

With the Blu-ray hitting shelves this week, it’s the perfect time to revisit the series. If you find the love for the Indiana Jones films there that you’ve always had, don’t hesitate to pick up The Young Indiana Jones Chronicles, either. During the ’90s, Lucas and Spielberg teamed up to fill in Indy’s early years. They’re all available on Netflix, but the DVDs are filled to the brim with historical documentaries that put every episode in context. If you’re going to watch any of these, make sure you watch Indy’s time during World War I. Those episodes are almost as great as the original films themselves.

There has never been a better time to revisit these movies, and I hope everyone can find as much enjoyment in them as I have over the years. Adventure has always had a name, and it’s still Indiana Jones.