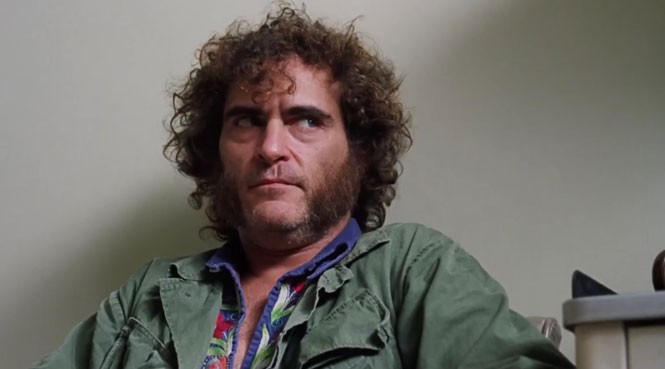 There are those who will observe—and have observed already—that Paul Thomas Anderson's adaptation of Thomas Pynchon's Inherent Vice is weird, rambling, fragmented, occasionally over the top and not at all concerned with pulling together all the threads of its sprawling detective narrative. And I nod in agreement at those people, and shrug, because those are features, baby, not bugs.

Anderson follows the misadventures of "Doc" Sportello, a private investigator living in the squalid splendor of ca. 1970 Gordita Beach, Calif. When his "ex old lady" Shasta Fay (Katherine Waterston) shows up at his door, claiming that the wealthy real-estate tycoon with whom she's having an affair may be the target of a murderous conspiracy, Doc jumps on the case—and immediately finds himself entangled with local police, the FBI, white supremacists, the widow of a dead musician and drug smugglers.

That's one messy case all right, and much of the fun involves watching Doc grow increasingly paranoid at the way every person he encounters seems to be part of the same huge mysterious web of intrigue. And Phoenix is magnificent in the role, showing off a zest for physical comedy he's never really indicated was in his bag of tricks before. Some of the year's biggest laughs can be found in his reaction to a photo of a baby, or his attempt at a "sneaky" walk.

The supporting cast adds enough great work—particularly Josh Brolin as the flat-topped cop who delights in tormenting Doc, and Waterston in a hippie-chick spin on the classic femme fatale—to make Inherent Vice a joy even if it were nothing more than a blissed-out comedy riffing on everything from Chinatown to The Big Lebowski. But its madness in fact becomes central to its world-view: both hilarious and kind of tragic, leaving you giggling helplessly at the exact same stuff that might have you crying once the high wears off.