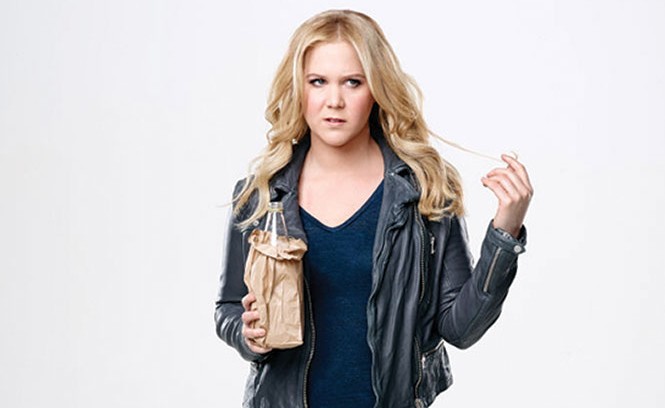 Amy Schumer is a busy girl. She's currently in the midst of a 19-city tour (the fourth stop of which is this Thursday at the Maverik Center); the fourth season of her Comedy Central show Inside Amy Schumer is set to debut April 21; her book The Girl With the Lower Back Tattoo—filled with tales that range "from the raunchy to the romantic, the heartfelt to the harrowing"—will be released by Simon & Schuster in mid-August; and if that wasn't enough, she also just finished penning an as-yet-untitled script with pal Jennifer Lawrence.

In typical self-deprecating fashion, a promo for the upcoming season of her TV show, features the New York-bred comedian being formally diagnosed with overexposure. A man portraying a doctor suggests that she fly under the radar for a while, to which Schumer, 34, responds, "No can do, Doc. Gotta follow my heart; keep exposing myself," with a cat-that-ate-the-canary grin.

Ever defiant, Schumer's style is unapologetic and permeates to everything she does—be it gag-falling on a red carpet in front of Kim Kardashian and Kanye West—to bringing down the editors of Glamour magazine, who unbeknownst to the Trainwreck star, recently included her in their "Chic At Any Size!" issue.

On the phone with City Weekly from Penn State University, where she's gearing up for a gig, the first thing I notice is that she pronounces my name to the hilt. After I compliment her on it, she lets me know it's because she doesn't identify as white. "Is it just, like, a sea of white people there?" she asks of Salt Lake City. The conversation quickly turns to pre-show rituals, political endorsements and Franken-burgers.

Do you do anything to get into the zone?
Yeah. I'm not religious, but we do a little group prayer before we go on. We all say that we wanna do the best show we've ever done; that we're grateful people came out; and then my brother's jazz trio goes up first, so I watch that and sip on a glass of white wine. It's really not a ritual, as much as what I do.

So you're plus-size now, huh?
Oh yeah, did you hear? I'm plus-size. Is that gonna go over well in Utah?

You'll do great here. Utah is the home of fry sauce, after all—a half-ketchup, half-mayonnaise concoction.
Half-mayonnaise, half-ketchup? OK, I thought that was called Thousand Island, but what do I know? Don't tell anyone there that that's already a thing, and it's called Thousand Island dressing. I'm really excited for the show there, because I think I haven't performed anywhere near there since I was in Last Comic Standing, which was almost 10 years ago.

Any special tweaks for your show here?
I plan on bringing it. I know the environment there, but I'm not gonna go any softer or change up my vibe at all.

That lack of sacred cows is definitely something that characterizes you. Do you ever fear that you're getting too close to the edge?
You know, I've gotten death threats from my stand-up and, there are some things that make people upset, but what's great about stand-up; that there are so many comedians, and you can go see who you want. I don't think people are gonna pay money to come see me unless they know who they're seeing, and are like-minded. That's kind of the luxury of being better-known now than when I started out. Some things I talk about do scare me, but I do feel a responsibility—because I'm somebody with a voice right now—to talk about them, because they're important to me.

You've crossed over from comedy clubs to large arenas ...
It's crazy!

Do you ever come across paraphernalia from touring bands that might have performed in the same venue days before?
Unfortunately, they clean them out pretty well. That doesn't mean that I don't go hunting for it. But like last night, I performed at this place where people play hockey, so my luxurious dressing room was just a locker room that smelled like balls and beer.

Two of my favorite smells!
[Laughs] What could make a girl feel more at home?

What's the plan of action now that you've been diagnosed as being overexposed?
To do what everybody does when they have a problem—be in denial and ignore it until it catches up with me.

That is also called the Mexican way, so you know.
Thank you very much! I'm learning so much.

You recently endorsed Hillary Clinton for president, and while doing so, you quoted a line from Bambi. If we were in an alternate universe and you'd endorsed Trump, what Disney film would you reference?
Gosh ... I think I'd be referencing The Little Mermaid's Ursula—poor unfortunate souls—for all the souls I'd be trying to suck up, and stealing people with voices that matter. I'm really proud about that comparison [laughs].

You're obviously doing the circuit, and these phone interviews can be a little bit awkward. What are some of the questions you're over hearing? That way I'll avoid them.
Well, first I want to say that this interview has been honestly a delight, but also that is not saying much, because they usually are really atrocious. Just yesterday on the phone, the guys was, like, 'You wear a lot of short skirts. Do you ever get uncomfortable?' And I was like, not until now. He obviously was really hung up on that. And just questions from people who are trying to work out how they feel about something, rather than use their time to talk about anything worthwhile. Like, 'You say things that I'm uncomfortable with,' and they wanna use the time for you to help them to digest you, and it's like, you gotta work out your own shit on your own time.

Going back to Inside Amy Schumer, the fourth season hasn't even aired yet, and I read it's already been renewed for a seventh?
A seventh season? No, that rumor is not true, but that's very funny. Yeah, we're doing a fifth and then we're not doing a sixth season, but we are doing a seventh season [laughs]. I'm really proud of this season, it's the craziest one.

When you are on the road, do you give yourself time to explore the cities you're in? Maybe hit up a local diner or donut shop?
Oh yeah. Every city I go to, I want to know what the thing is. You know, if I'm going to be a good plus-size model, I've gotta use these opportunities to plump up on the local fare. What would you say is the signature Salt Lake food?

Well, Salt Lake City is the home of the pastrami burger, which is a pastrami sandwich stacked inside an actual cheeseburger, so it's like a double whammy.
Hmm ... thank God they finally got the pastrami and the cheeseburger together. Well, I guess I know what I'm eating.