Developer tries to save his Big Cottonwood Canyon project with a little help from his elected friends. 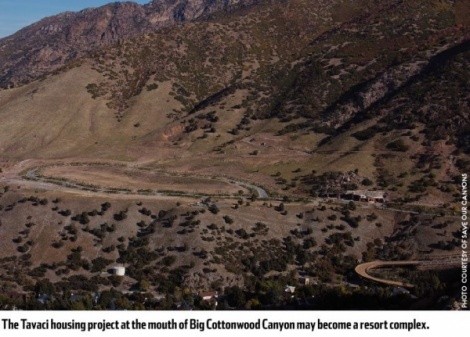 Cottonwood Heights officials knew early on that proposals to allow higher-density housing on developer Terry Diehl’s Tavaci project were going to be controversial.

In an April 2009 e-mail, City Planning Director Michael Black wrote that some residents would say nine-story condo towers on the foothills “will stick out like a middle finger giving the rest of the city the bird.”

Nevertheless, more than 100 pages of e-mails between elected leaders, city staff and the developer—obtained by nonprofit conservation group Save Our Canyons through a records request— reveal officials continued to develop plans to accommodate Diehl’s rezoning request while encouraging one another to keep the public in the dark. (The e-mails can be read here).

The plans for condo towers morphed into a year-round resort with lower roof lines, “so that it’s not just a Terry Diehl bailout,” Black tells City Weekly. But despite those assurances from Black, residents’ concerns that the plan was being crafted specifically for Diehl only got stronger when the e-mails were released to Save Our Canyons in mid-November.

For his part, Diehl tells City Weekly that “we’re just sitting on the sidelines” and “we in no way wrote that [zoning] ordinance.” However, e-mails reveal a Diehl contractor provided the first draft to the city’s planning department, and former Utah House Speaker Greg Curtis, a Diehl consultant and attorney, edited later versions of it.

Roger Kehr, the city’s volunteer emergency-communications coordinator, says he wanted to stay neutral as his neighbors began to organize opposition to the rezone this month, but the e-mails made him furious.

“I didn’t want to find anything that smacked of impropriety,” Kehr said. “I never had any intention of taking a position, but after reading [the e-mails], I can’t stand by anymore.” He compares Diehl’s involvement in crafting the zoning ordinance to “the oil companies going to the EPA and giving them the law for governing pollution.”

Tavaci sits atop a foothill at the mouth of Big Cottonwood Canyon. The road that services the development, which many residents opposed, was completed three years ago—before the real-estate bubble burst—and yet only one display home has been built.

Even if 43 mansions are built there, as current zoning allows, nearby Cottonwood Heights residents worry that their views will be obstructed, the plan may set a precedent for further development of the foothills and increased traffic may exacerbate problems on Big Cottonwood Canyon Road, especially during peak times.

Residents are concerned that condo towers or a resort could make each of those problems worse than mansions.

The current foothill zoning predates the 2004 incorporation of Cottonwood Heights City. It allows houses up to 35-feet tall on 46 acres just north and above Big Cottonwood Canyon Road. The controversial road that accesses the project was approved by the Salt Lake County Council in 2003. Save Our Canyons filed a lawsuit to stop it but lost that case in 2005.

Cottonwood Heights City Councilman Bruce Jones, who is also the Utah Transit Authority’s general counsel, served on the county’s planning commission when the original zoning for Tavaci was approved in the 1990s. He says he never liked the idea of sprawling mansions on the foothill— he blames what was then the Salt Lake County Commission for approving the plans—and is sensitive to residents’ concerns about obstructing their views or scarring the natural environment.

“I think just homes splattered across there is a mistake,” Jones says. “If you were to put in the existing project [mansions only] as approved, you will have homes on the hillside actually higher than what [Diehl] is proposing to do with this more condensed, clustered or mixed kind of project.”

The rezone proposal began in February, when Diehl approached Jones about the possibility for higher density on his project. The Tavaci project and Diehl’s personal home are in District 4, which Jones serves. Jones went to Black on Diehl’s behalf, and then brought Diehl with him to a second meeting with Black to discuss the possibility of building about 10 condo towers on the foothill.

“I didn’t see how that benefitted the city,” Black says. “I said, I think if we were to look at this as a resort-residential zone, rather than just increased density, that might fit into our general plan.” A resort, Black figures, could attract some tourists who normally drive through Cottonwood Heights on their way to the ski resorts in Big and Little Cottonwood canyons.

From that point forward, the plan was always labeled “city-initiated,” which city manager Liane Stillman says helped Diehl avoid paying fees but also means the city can take as much time as it wants to consider the ordinance without violating state law. It puts the city in the driver’s seat, Black says, but it’s clear from the e-mails that Diehl and Jones acted as vocal back-seat drivers.

On April 21, Black received a draft ordinance for the Canyon Resort Residential Zone from Diehl contractor Blake McCutchan Design. That draft permitted 90-foot condo towers and things like bed-and-breakfasts. Black added portions because, as he wrote in an e-mail to Cottonwood Heights Mayor Kelvyn Cullimore, “the proposal lacked any teeth for the city to enforce anything.”

On April 28, Black wrote to Jones that he’d received his first call from a resident wondering if Tavaci was seeking higher-density zoning. “I told him, of course, that Tavaci isn’t doing anything right now, as they are not.”

After speaking with Diehl in June and July, Black wrote to Diehl that he “tried to incorporate everything we talked about,” including 90-foot condo towers. Unlike previous drafts, this one explicitly said that the zone was intended for resort uses.

The planning commission heard a presentation from Black on Aug. 5 about the Tavaci plan. Meeting minutes show that no members of the public commented. “Nobody showed up, but whose fault is that?” Diehl says. “The meeting [agen das] are published.”

Resident Bill Carrigan complains, however, that the agenda items said nothing about Tavaci or proposed 90-foot towers on the foothill. Carrigan says residents who are concerned now would have attended that meeting—and others—if the real implications were more clearly defined on the agenda.

Even Stillman says she knew nothing of the potential for a Tavaci rezone until after that August meeting when the commission made a positive recommendation. She wasn’t the only one taken by surprise: Even some planning commission members apparently misunderstood what they had voted on.

Cullimore says, “At least the [planning commissioners] that I talked to claimed to have missed the fact that it could be 90-foot buildings. They were focused on density issues … and totally missed the height thing.”

The Cottonwood Heights City Council was scheduled to hear the proposal next, though its members were also unprepared, Cullimore and Stillman say, because no one on the council except Jones knew about the plans. Cullimore, however, did not place the blame for that lack of education on Black. In an e-mail about Black’s role in the August presentation to the planning commission, he wrote, “You were caught in a difficult situation with a councilman pressing you for actions. It was unfortunate Bruce [Jones] chose to take that approach. Usually, city-initiated zoning ordinances should come from the council, not an individual councilman.”

Still, Jones continued his cajoling of Black, writing several e-mails at the end of October to push the council vote on the rezone and ensure that it would happen “while I’m still around.” Jones did not run for re-election and will be replaced in January. On Oct. 23, Black told Jones and Cullimore he thought they only wanted the ordinance voted on by the end of the year, and that it would be impossible to amend the general plan simultaneously. Jones protested, but Cullimore says now that Black’s advice ruled the day and only the ordinance will be voted on by year’s end.

Save Our Canyons Spokeswoman Jennifer Kecor says the group opposes the rezone and also the process used to develop the zone. “Having low-density residential is one thing, but creating an ordinance for one development is just a whole different game.”

But Cullimore is not concerned about Diehl’s level of involvement in helping draft the ordinance. “I know there are some who perceive that there is something inherently wrong with that, but the reality is we were trying to craft something that would be reasonable from the property-owner’s perspective—or there was no reason to do it.” He also believes the process was adequately open.

But on Sept. 2, the mayor wrote to Black that the planning commission vote “makes the entire process subject to discovery by the public. I do not fear that, but premature involvement will make our job that much more difficult.” On Oct. 21, six months after the planning department first got word that Diehl wanted a rezone and less than three months before Jones hoped to apply the new zone to Tavaci, both the mayor and Jones criticized Stillman’s suggestion that the city write an article for the city newsletter describing the project for residents. “That’s how we will build support for the concept: Educate people,” she wrote. Jones replied, “This feels to me more like a method of raising clamor and opposition to the zone.” The mayor added, “Good points, Bruce.”

Two days after that exchange, and one day after facing a budding opposition citizens group that met at former state Sen. Carlene Walker’s house, the mayor wrote to Jones and city staff that, “I am more convinced than ever that we have to be totally transparent in this process.” The article was written by the mayor and included in the city’s newsletter that was distributed with the Nov. 4 Valley Journal. Several concerned residents at the Nov. 17 city council meeting said that article was the first they had heard of the project. Many have also complained that having a public comment hearing on Dec. 8 for the new ordinance seems too soon.

The mayor and Jones say now that they initially opposed the article because it was unclear at that time how the ordinance might change.

As for Jones, he still supports what he thinks is best for the city, even if others disagree.

“Wouldn’t it be exciting if people were to say … ‘Where do you want to go skiing, Sun Valley or Cottonwood Heights?’ To me, that’s a great prospect,” he says. “I understand the opposition, but as a city-council person, you have to look beyond that.”