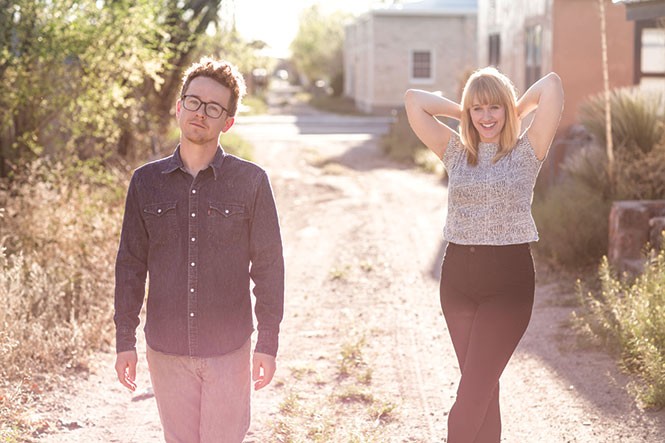 Between Jenn Wasner's evocative vocals and Andy Stack's vivid musical backdrops, there's something about Wye Oak's unique blend of indie folk and dreamlike synth-pop that feels effortless. This typically means that they're working their asses off. Unlike so many other bands that are so entrenched in their niche they forget how to innovate, Wye Oak has demonstrated that it is not only possible to evolve while remaining true to one's artistic roots, but that it's crucial to staying alive. "Settling into habitual playing or thinking is death to creativity and progress," Wasner says.

Wasner and Stack have been collaborating since they were in high school, and they released their first album, If Children, with Merge Records in 2008. It's right at home with albums by contemporary indie-folk outfits like Beach House and Fleet Foxes, but rather than fixate on creating a straightforward record of catchy tunes and linear narratives, Wye Oak debuted by pushing the limits of what a guitar, drums and the occasional keyboard can do. "We've always been inspired by limitations," Wasner says. Inspiration through limitations is perhaps the best way to define the style that the band pioneered with this record, and it's a thread that has continued through each subsequent album.

The two continued to refine this process with 2009's The Knot and 2010's My Neighbor/My Creator, but it was 2011's widely revered Civilian that turned the band into alt-folk darlings. Their growing popularity led to an intense touring schedule that was an extremely trying process for both Stack and Wasner. When the band released Shriek in 2014, there was a pronounced difference in their musical direction. Wasner swapped her electric guitar for a bass, and Stack expanded his repertoire with a heavier emphasis on synthesizers. Regardless of these substantial changes, there was no mistaking it for a Wye Oak album. "We were interested to see where our instincts would take us when we deprived ourselves of the tools we were most comfortable with," Wasner says.

It's always a risky move for a band to deviate from the aesthetic that they've established for themselves. The annals of rock history are full of musicians who have impaled themselves on their own reinventions. Wye Oak managed this transition quite skillfully, however, and created an album that defiantly stands on its own while remaining true to the band's signature style. "In the end, it's the ideas—not the tools—that really count," Wasner says.

In June, Wye Oak released Tween, their sixth studio album with Merge Records. It consists of a few songs that were in a sort of limbo between Civilian and Shriek. "When we rediscovered these songs, what surprised us most was how much we still liked them," Wasner says. "I'm notorious for getting tired of old music very quickly, so I thought that was a pretty good sign that these songs were worth sharing." Despite the pivotal shift between Civilian and Shriek, a trip through Tween helps the listener actually pinpoint some embryonic moments between its two predecessors. Songs like "Watching the Waiting" mix Civilian's more folky sensibilities with the breezier vocals that Wasner exhibited on Shriek. "It was interesting to finish these older compositions now that we've both grown pretty substantially as producers," Wasner says. "I don't think they would have turned out nearly as well if we had tried to finish them when we wrote them."

Digging into their catalogue and chronicling the trajectory of their evolution is a revelatory endeavor. Taken as a whole, Wye Oak's career is a rare and beautiful thing. When our conversation eventually turns to the creative process, Wasner's answer succinctly defines Wye Oak's ability to move forward: "The thing about creativity is that the same method rarely works twice," she says. "I try to have a 'practice,' but when it comes to inspiration, you just have to take it as it comes—unpredictably."