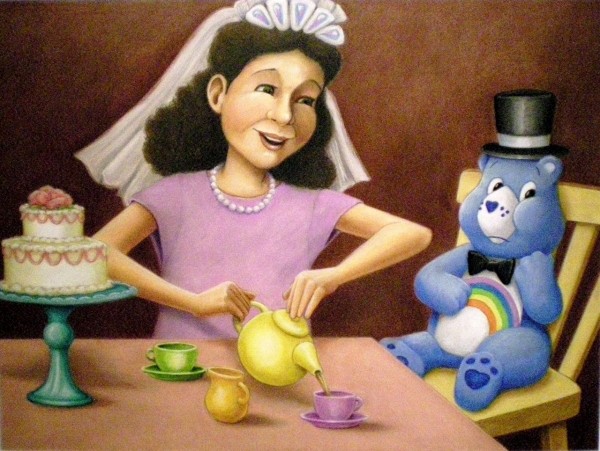 Life is made up of moments, and the ones we tend to remember are comparatively few: flashpoints of life in sharper relief, instances that often define us and determine who we are. These are often transitions or turning points: times in which the actions we take can affect the direction our lives will take thereafter.

The Intersections project focuses on lesbian, gay, bisexual and transgender adults and their allies, taking on the theme, according to the Intersections statement, of “pivotal crossroads they have encountered throughout their lives; their methods for navigating these paths, trails, roads, and highways (or perhaps bi-ways); and the resulting consequences of these journeys.” The project is a partnership between SAGE Utah (a social, service and advocacy organization for seniors in the LGBT community) and Art Access Gallery.

The idea for Intersections was born about a year ago in a conversation among Charles Frost, a SAGE Utah board member and a local writer and actor; Art Access executive director Sheryl Gillilan; and Andrea Globokar, former chair of the Art Access board of directors. As the idea evolved, local artist and Art Access board member Daren Young was invited to be part of the process. Frost would lead literary workshops, and Young would lead art workshops, helping people tell their stories based on the theme.

The workshops took place this past winter and spring, and there was also a call for entries for works from the public to be exhibited this month. The results are incredibly moving. Frost recalls that the stories the workshops elicited included death and dying, coming out, finding out a parent is queer, and intergenerational insights from pieces on HIV/AIDS and living through that era. Some younger participants also used poetry and rapping as their expressive media. The writings led to a tremendous catharsis and relief, as well as conversations about what it means to be queer today, and what kinds of battles participants have endured.

“The universe presented an option: not choosing our orientation, but how we encountered these situations,” Frost says.

Young says that other LGBT-themed art shows have been held locally, but “this exhibit is unique because of its focus on the process of storytelling through visual art. As a result, it might be considered more personal and intimate in its content.”
The theme also struck a personal chord with him: “The entries I personally have in this exhibit draw on some of my own crossroads moments: the first time I experienced a broken heart, coming out to a friend, and finding my soul mate.”

Art Access Program Director Amanda Finlayson notes how the program fits with the organization’s mission and goals: “Art Access focuses on the importance of sharing personal stories with our community. We believe that art serves as a vehicle for storytelling that can bring people closer together and nurture empathy for one another.”

Art Access was already booked for its 30th-anniversary exhibition, so Urban Utah Homes & Estates donated its office to house the show. Babs De Lay, owner of the real-estate firm, says, “I am a huge supporter of the project, and luckily have the wall space.”

A number of stories from workshop participants, in addition to entries from the public, will be considered for publication in a juried collection published by Art Access. Plans are also in the works to create a performance-art piece from some of the selected stories, which may go on tour statewide. Some of them will also be considered for inclusion in Art Access’ Desert Wanderings literary magazine.

“We hope that the workshops stimulate conversation and interest, and the project will continue, and come full circle with a performance of the theatrical piece at Pride next year,” Frost says.

“There is a tremendous power in sharing your stories with others,” he adds. “There was a lot of laughter and tears, but best of all, mutual understanding and respect. In the workshops, we showed them how to go deep into those moments, become vulnerable and we opened up a beautiful dialogue, things people have never shared before. I thought, ‘how courageous, how cathartic.’ ”