You can soak in some happy tunes in Monroe before you soak in the hot springs. 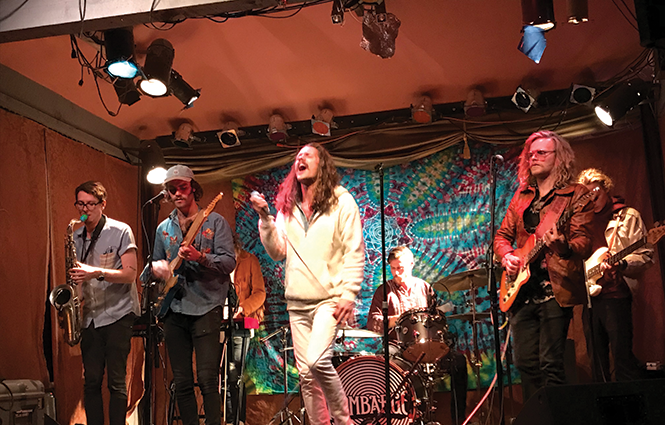 You'd be hard-pressed to find a small, rural town in Utah that harbors something more special than Monroe does. It has red rocks on one end of the valley, blue mountains on the other, and some of the coolest (not temperature-wise) hot springs in the Intermountain West: Mystic Hot Springs.

The springs have understandably become a bit Instagram famous in recent years, but views and earthy tubs aren't all they have to offer. The springs—located on the outskirts of Monroe and built around a disused '70s-era public pool facility—also play host to shows, even boasting a music festival organized by the owner, the legendary Mystic Mike. Delighted to find that they had scheduled shows going into November—and needing to pay a visit to my parents—I headed down there late in the afternoon one recent Sunday to take a dip in the springs I grew up swimming in, but more importantly, to see music there for the first time.

The spot is only a quick three minute shot from my parents' house; it's that kind of small, small town. Upon arriving in the dark parking lot—which is surrounded by restored, rentable pioneer cabins—I realized I was a bit tardy, unable to shake off my city-slicker proclivity for lateness. Rock music filtered out into the dark from the main office building, meaning the show wasn't happening outside after all, as I'd hoped. Toting all my hot springs gear with me despite this, I went inside, paid the $10 cover at the front desk, which was covered in crystals and other souvenirs for the spiritually-minded, and quickly moved into the long side of the room, finding a seat among the small crowd.

My only context on what to expect was rooted in the Mormon families I grew up with being very wary of the music that sometimes trickled down into the valley. But the band playing offered no reason for suspicion. Bombargo—a Canadian group dealing in funkedelic, throw-back rock with a hint of folk thrown in—were all good vibes. On their first U.S. tour all the way from Saskatoon, Saskatchewan, they'd reiterate with an unabashed sense of awe throughout the night how happy they were to be so far from home, performing at the "mystical" Mystic Hot Springs following a date in Salt Lake City at Soundwell.

The first half of their two-part set was long, and the lively seven-piece group (two guitarists, a bassist, a keyboardist, a drummer, a saxophonist and an arms-swinging vocalist) managed a lot of movement and vigor for being crammed on the small stage together. A giant tie-dye banner behind them added to the sense of flare and slight chaos. They churned out rambling, jazzy, funk-filled jam after jam, referencing the likes of Alabama Shakes with the pop sensibilities of Dr. Dog, shot through with the kind of glowing positivity that comes with playing sunny folk rock.

Interludes between songs were filled with smooth, jazzy improvisation as frontman Nathan Thoen affably explained the band's history, who they all were, introducing members and letting them jam into solos. And though most of those in the audience began the evening sitting in fold-out chairs in front of the stage, by the end, every person had danced to at least one song, a trend that started when an older woman next to me turned and asked, "Why is no one dancing?" Since that's the exact attitude I want to maintain into my own older years, I responded, "I don't know, but let's dance!" Rousing covers of "All Along the Watchtower" and Earth Wind & Fire's "September" reaffirmed Bombargo's allegiance to the '70s just as much as it inspired me and everyone around me to really dance.

Upon asking, I found that the other dancers weren't from Monroe at all, which I'd suspected, since locals have always had an aversion to the place. My dance partner was from Seattle, and had been passing through the area with her husband and dog. A young couple wearing cowboy boots and sharing baby-holding duties was from Springville, while another pair hailed from Murray, with a friend who had family in the neighboring town of Annabella.

During intermission—after which Bombargo promised to mount the stage for another round of songs before soaking in the springs—I explored the shop that made up the rest of the space. Vintage clothes mingled with crystals, sage candles and incense, sculptures, a rack of bathing suits for forgetful visitors and other odds and ends. A back hallway was plastered with old show posters, most featuring bands I'd never heard of. But there was a Grateful Dead cover band advertised, near a surprising poster for a Jonathan Richman show (of Modern Lovers fame). Clippings from the mid-1990s and 2000s from local newspapers (and City Weekly) peppered the walls, too, confirming that this place is and has been special to a wide variety of visitors, for a wide variety of reasons.

What's changed for me is that now I've got one more reason to visit Monroe. And for the first time—thanks to Mystic—it's music.