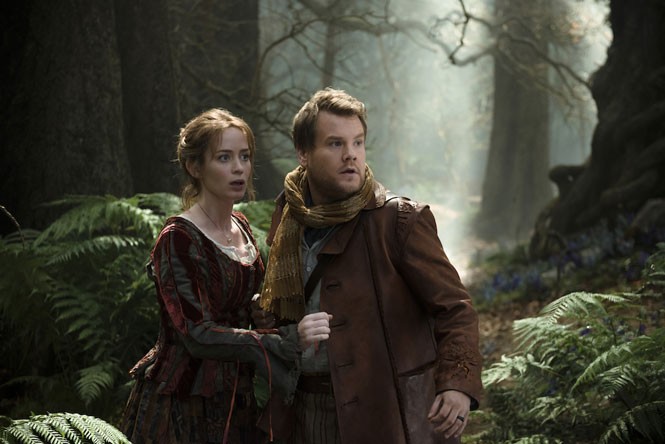 For large chunks of Into the Woods, it seems as though Rob Marshall is determined to do what we're all told never works: turning a stage musical into a movie while resolutely retaining its "stageiness." And that's also when Into the Woods is at its most delightful.

The Stephen Sondheim/James Lapine musical retains the basic structure that intertwines multiple fairy tales into one complex plot. While Cinderella (Anna Kendrick) tries to find her way to the ball, Red Riding Hood (Lilla Crawford) heads to grandmother's house. And while Jack (Daniel Huttlestone) heads to town to sell his cow, The Baker (James Corden) and his wife (Emily Blunt) try to find the objects that will appease a witch (Meryl Streep) who has cursed them with childlessness.

There's not a lot of meat on the bones of the narrative, which touches on the moralizing, instructive nature of fairy tales while mostly providing a framework for Sondheim's tunes. And while the composer is known for more complex melodies than the hummable show-stoppers favored in most musical theater, Into the Woods still offers an opportunity to hear great versions of "Agony," It Takes Two," "On the Steps of the Palace" and other terrific songs.

But it's perhaps most satisfying when Marshall opts for staging that emphasizes a theatrical brand of artifice, like the spray of "moonlight" with which he illuminates the Wolf (Johnny Depp), or the set piece involving Red Riding Hood's rescue. Those elements make for an awkward mix with the Witch disappearing in a CGI cloud of smoke, or the Giant's wife literally towering above the treetops. There's a unique vision that almost gets a thorough exploration, until Marshall gets perhaps too timid about showing movie audiences the different kind of magic that gave life to this material in the first place.