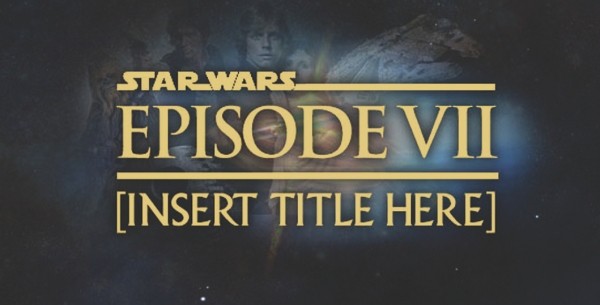 In case you hadn’t heard, we are living in the Information Age. There’s an endless wealth of information at the fingertips of anyone with a computer. And online, any story—true or false—can spread like wildfire.

Maybe it’s our own fault. We’re geeks, and part of being a geek is wanting to know even the most minute details about the things we love. We’re constantly on the hunt for news. And since we’ve coupled our interest with unbridled enthusiasm, we share what we’ve learned with others.

You wouldn’t think this would be a problem, but people are often drastically misinformed about things, and it’s hard for legitimate news outlets and people with journalistic ethics to keep people informed when there are so many fake stories in the world of geekdom.

Take, for instance, the recent incident involving rumors about the title of the new Star Wars film, scheduled for release next year. Harry Knowles of AintItCool.com said  he was confident that Episode VII would be titled The Ancient Fear. Knowles ran a similar story in 2004, during the runup to Revenge of the Sith. That time, he was confident the title of Episode III would be The Creeping Fear. His website had also said it was 100 percent confirmed that Christopher Walken had been cast as the villain in Episode II.

Other journalists looked at Knowles’ piece on Episode VII, did some digging, made calls to sources, and then decided to ignore it. But, just as Mark Twain said, this little piece of “journalism” made it halfway around the world while the truth was still putting on its shoes. Everyone from C-NET to Entertainment Weekly reported the announcement that Episode VII would be titled The Ancient Fear. Conan O’Brien even did a sketch using the title as a jumping off point. Searching Google News for the title yields more than 14,000 articles, and not a single one on the first page of results has a headline that casts any doubt on the veracity of the report.

This is something that happens almost every day in fandom. Anyone can have a website, but not everyone is as thorough as they should be when deciding to run or not run a story. Some websites run unsubstantiated rumors as fast as they can find them because we keep clicking on them. Then you get a whole bunch of publicity for a movie (or a book or a comic book or whatever) that doesn’t even exist yet.
So what can we do?

First and foremost, consider the source. See how these sites are reporting the rumor. Is it being reported as fact? Where is the confirmation from an official source or reliable outlet? Follow links back to the original article and weigh the trustworthiness of that source. If you realize a site is creating headlines that are simply clickbait, don’t read them anymore. Remove them from your bookmarks and find sites that properly source and cite their information and clearly label things as rumors.

You may have to do some hunting, but you can find places that aren’t simply out to bait you.